Before being used by Hitler’s Nazi regime, swastikas were commonly known as an ancient sign used by Hindus and Buddhists carrying positive associations such as auspiciousness and good fortune.

By DANIELLE ZIRI
AUGUST 6, 2017 09:01
teespring
(photo credit: screenshot)
Advertisement
NEW YORK – The US-based clothing website Teespring is selling T-shirts and sweatshirts branded with swastikas, aiming to make them a “symbol of love and peace.”The designs, created by KA Designs and sold on the site, all display large swastikas in the front. One shows the Nazi-associated symbol in rainbow colors with the word “peace,” another one with the word “zen,” one reading “Love” and a third design, in black, shows a spiral of swastikas. They range in price from $20 to $35.

US T-shirt company sells swastika design as ‘symbol of love and peace.’(Screen Capture)“Here at KA we explore boundaries. We push them forward,” the company wrote as a description for the products. “Let’s make the swastika a symbol of Love and Peace. Together, we can succeed.”Before being used by Hitler’s German Nazi regime, swastikas were commonly known as an ancient sign used by Hindus and Buddhists carrying positive associations such as auspiciousness and good fortune. KA Designs is attempting to revert the now negative sign to its origins.The company even made a promotional video claiming that the Nazis “took the swastika, rotated it 45 degrees, and turned it into a symbol of hatred, fear, war, racism, power.”“They stigmatized the swastika, they won, they limited our freedom, or maybe not?” the video continues. “The swastika is coming back.”On some of the tee shirts sold by KA Designs, the swastika remains turned by 45 degrees, similarly to the Nazis’ use of the symbol.In a Facebook post on Sunday, executive director of the Israeli-Jewish Congress and pro-Israel activist Arsen Ostrovsky called the shirts “obscene and disgusting.”“It may have been a symbol of peace,” he wrote. “That most certainly is not what it is primarily associated with today.”Ostrovsky also pointed a finger at Teespring for seeking “to profit off of this in the name of art, trying to turn this irredeemable Nazi symbol of hate and murder into a symbol of ‘love and peace.’” “They are not unique in this, however, with a disturbingly growing pattern in recent years of other clothing companies seeking to do similar,” he told The Jerusalem Post. “This is not only highly naïve, but grossly offensive. What's next, using ISIS symbols to promote gender equality?” “Hopefully management will understand the magnitude of their mistake and offense caused, and discontinue these items immediately,” Ostrovsky concluded. 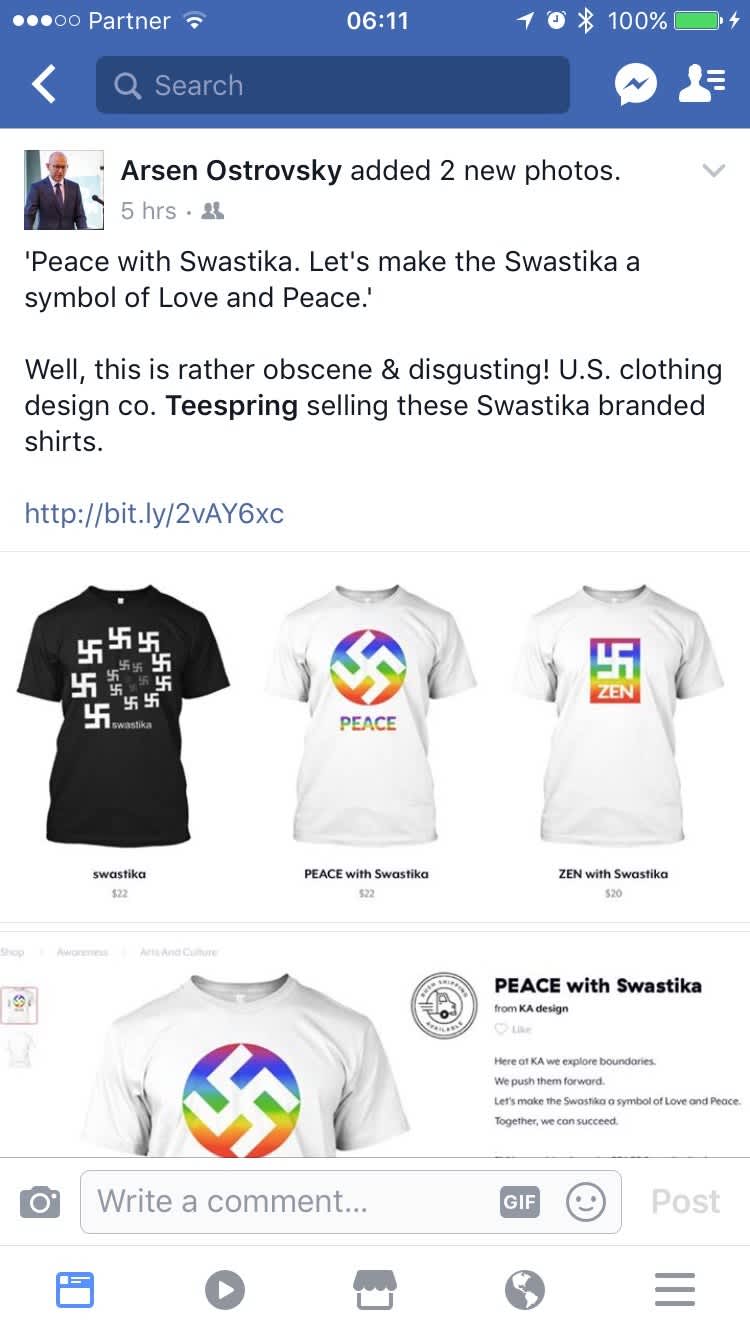 Arsen Ostrovsky posts on Facebook against the "Peace with swastika" shirts. (Screen Capture)
The issue has also been discussed online by the YouTube channel “The Open Debate.”“When I initially saw it, I assumed that it was just a joke,” the person in the video said. “There are some things that just aren’t going to happen. When some people view this symbol, they don’t feel anything and can recognize it as whatever they’d like. For others, this symbol has a very deep history of hate, pain and suffering.”The attempt to re-brand the swastika, he added, will “most likely evoke a lot of emotions.”Teespring.com has sold several swastika-branded shirts in the past, all referring to the Hindu meaning of the symbol.Teespring and KA Designs have yet to respond to the Post’s requests for comment.