“He’s just spreading a message of hatred. And we have to keep calling that out."

White nationalist leader Richard Spencer of the National Policy Institute.
(photo credit: REUTERS)
Advertisement
A white supremacist website has called on its readers to “troll” Jewish residents of Whitefish, Mont., home to white supremacist leader Richard Spencer.The Daily Stormer, a white supremacist publication, published a call Friday to “take action” against Jews in Whitefish by writing and calling them with anti-Semitic messages. The post included the names, phone numbers and addresses of Jewish Whitefish residents — in addition to the Twitter handle and photo of a child.The post also included photos of Jewish residents of Whitefish emblazoned with yellow stars. Along with using a number of anti-Semitic slurs, the post warned readers against using “violence or threats of violence or anything close to that.”The post claimed that Jewish residents were “threatening” Spencer’s mother’s business.Spencer is president of the National Policy Institute, a white supremacist think tank. Last month, he spoke at a white supremacist event in Washington, D.C. celebrating President-elect Donald Trump’s victory. At the event, Spencer said “Hail Trump!” and was greeted by Nazi salutes. 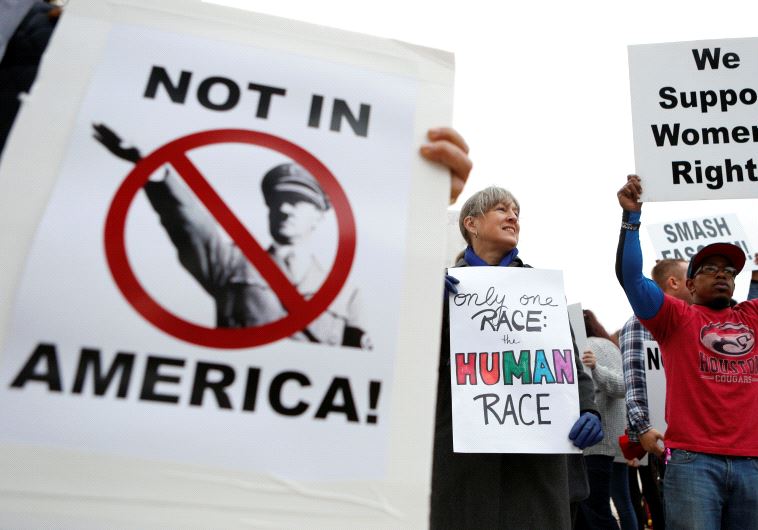 A protest against white supremacist Richard Spencer. Credit: ReutersOne of the Jewish residents named by the Daily Stormer, Rabbi Francine Green Roston, is a member of Love Lives Here, a local anti-discrimination group. Roston, who moved to Whitefish with her family from New Jersey in 2014, told CNN last week that “Whitefish is way bigger than Richard Spencer.”“He’s not powerful,” she said. “He’s just spreading a message of hatred. And we have to keep calling that out, and showing that that is not representative of this country, certainly not representative of this community.”The local government of Whitefish, which has 6,000 full-time residents, has rejected Spencer’s ideas. Recently, the Whitefish City Council reread an anti-discrimination ordinance passed unanimously in 2014 that supports “the dignity, diversity, and inclusion of all of its inhabitants and visitors, and condemn ideologies, philosophies and movements that deny equality of human rights and opportunities and challenge our Constitutional freedoms granted by the United States and the State of Montana.”Montana Republican Sen. Steve Daines tweeted Sunday that the anti-Semitic post was “repulsive.”Colleagues of Roston’s from around the country have deluged her Facebook page with expressions of support. “Dear Friends, thank you for your messages of love and support,” she responded Monday. “I’m moved to tears easily these days and I am incredibly moved by our friends standing up to hate.”