One resolution calls for boycott of West Bank settlements, Jewish east Jerusalem; Israel not represented due to Foreign Ministry strike.

By TOVAH LAZAROFF
MARCH 24, 2014 12:42
United Nations Human Rights Council 370
(photo credit: Reuters)
Advertisement
The United Nations Human Rights Council debated five anti-Israel resolutions — including one that calls for a business boycott of West Bank settlements and Jewish neighborhoods of east Jerusalem — during its Monday meeting in Geneva.During the UNHRC’s entire 25th session this month, it is voting on only one resolution on Syria even though over 120,000 people have been killed in its ongoing civil war. Similarly there was only one resolution against the regime in Tehran which has executed over 80 people this year.The non-governmental group UN Watch, has already published the texts of the anti-Israel resolutions in advance of a 1 p.m. deadline to submit them to the council for debate this afternoon.Among the five anticipated resolutions that focus on Israeli human rights violations in east Jerusalem, the West Bank, Gaza and the Golan Heights, is one that speaks of the illegality of member states and businesses participating in settlement activity including in Jewish neighborhoods of east Jerusalem. It adds that such activity should cease.The resolution calls on member states “to take appropriate measures to ensure that businesses domiciled in their territory and/or under their jurisdiction, including those owned or controlled by them, that conduct activities in or related to the settlements, respect human rights throughout their operations, by taking all necessary steps— including by terminating their business interests in the settlements—to ensure that their activities do not have an adverse impact on the human rights of the Palestinian people.” 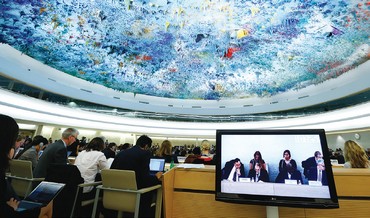 The resolution adds that this should happen “in conformity with the United Nations Guiding Principles on Business and Human Rights, the United Nations Global Compact and relevant international laws and standards.”In addition, on Monday, the UNHRC Special Rapporteur on the situation of human rights in the Palestinian territories Richard Falk is delivering a report. He calls, in his report, on the UN to ask the International Court of Justice at the Hague to issue an advisory as to whether Israel’s “occupation” of Palestinian territories meets the legal standard of “colonialism, apartheid and ethnic cleansing.”A report authored by United Nations Secretary General Ban Ki-moon will also be delivered to the council on Ban’s behalf, in which he calls on Israel not just to halt settlement activity but to “reverse" it.In light of the Foreign Ministry strike Israel won’t be represented at Monday’s UNHRC meeting.