Israeli researchers conduct genetic “barcoding” of nearly all the fish species in the gulf between Eilat and Aqaba. 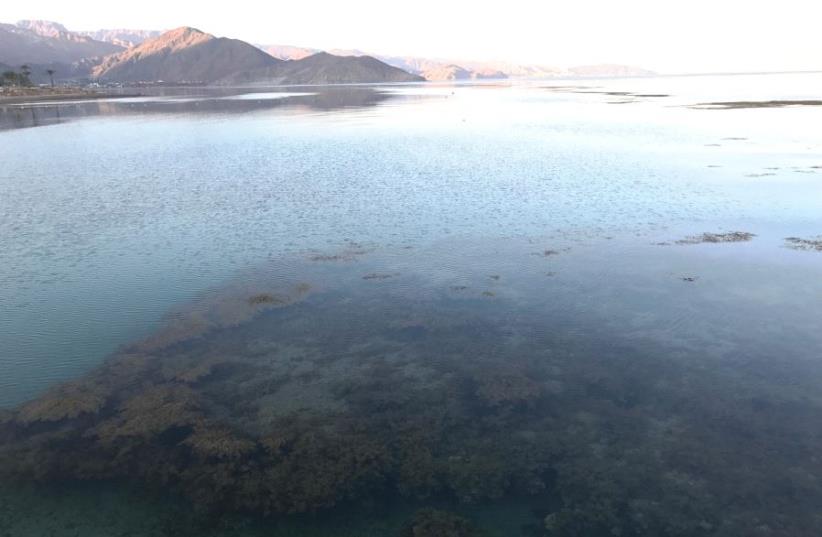 Coral reef and Sinai mountains at Taba Heights
(photo credit: BEN FISHER)
Advertisement
Almost all the wildly varied, colorful fish that populate coral reefs start life as tiny, colorless, tadpole-like larvae. Telling one from the other is nearly impossible – even for experts – and this presents a difficult challenge to those who study the ecology of the reefs.Prof. Rotem Sorek of the Weizmann Institute of Science; Prof. Roi Holzman of Tel Aviv University’s School of Zoology and the Steinhardt Museum of Natural History; and Dr. Moshe Kiflawi of Ben-Gurion University have now produced a way to understand precisely which species of larvae are present in the water around reefs. Altogether, the team sequenced the genomes of around 10,000 larvae in 400 different samples. Ultimately, they created a sort of map that could tell them, species by species, how many could be found, at what time of year, at which particular location and depth.Their study, which involved genetic “barcoding” of nearly all the fish species in the gulf between Eilat and Aqaba, showed not only which larvae were in the gulf, but how many of each were swimming around, at what time of year and at what depths. This study was recently published in the journal Nature Ecology and Evolution.“Understanding the types and distribution of the larvae is important for a number of reasons,” said Holzman. He and Kiflawi are resident researchers at the Interuniversity Institute for Marine Sciences (IUI) in Eilat.
Israeli and Swiss scientists discover coral that could beat climate change in Gulf of Eilat (Reuters)
A Related Video You May Like:
It is only the larvae that disperse – washed by currents and flows – while adult reef fish tend to stay close to their home reef. To the marine ecologists who monitor the larvae, they are an integral part of the ecosystem and of its future. Since the numbers of larvae can reveal something about the prospective populations of adult fish, monitoring them might be useful to fishery management as well, they explained. The researchers used the IUI’s research vessel, which is equipped with sophisticated gear that can sample larvae from specific depths. They sampled larvae twice a month over the course of a full year at various sites and depths near the two coasts of the narrow gulf as well as in its deep middle.“We had many sampled larvae,” says Kiflawi, “but current techniques involve inspecting them under a microscope and counting their spines – which can point to the taxonomic family, but not the species, and it also takes a lot of time. Luckily, we had discussed this with Sorek, who was then visiting the IUI.”Sorek’s lab in the Weizmann Institute’s molecular genetics department normally deals with different genomes, especially those of bacteria.“I thought that the techniques from the genomic research we employ in my lab could determine the identity of larvae by sequencing a ‘barcode’ from their genomes,” he said. Research student Naama Kimmerling from Kiflawi’s lab; Tamara Gurevitch from Holzman’s lab; research student Omer Zuqert; and Dr. Gil Amitai and Sarah Melamed from Sorek’s lab, together with their research groups and colleagues, adapted these techniques to identifying fish larvae.“Before we could apply the method,” says Sorek, “we had to create a database of ‘barcodes’ for all the reef fish in the gulf. That was a feat in itself; the team members took up diving in the gulf to clip the fins of adult fish for DNA analysis. Ultimately, we managed to create a database of barcodes for around 80% of the main fish species (420 of about 540) known to frequent the reef.”
GENETIC BARCODING is a technique based on comparing the DNA of one specific gene whose sequence varies from species to species. This convenient, very precise “labeling” technique has numerous uses in the world of biological research; it was an incontrovertible way to match larvae to their adult forms.The sequencing of the larval genomes was conducted in the advanced facilities of the Stephen and Nancy Grand Israel National Center for Personalized Medicine on the Weizmann campus. Until now, using barcoding to analyze large samples has been impractical.  But in this study, all of the DNA in each sample was sequenced together using a ‘metagenomics’ technique, whether the sample contained one individual or 500 larvae.“We invented a ‘trick’ that matches pictures of the larvae to their DNA sequence,” says Sorek, “and this enabled us to tell exactly how many individual larvae of each species were in the sample. But to get that one for each, we had to sequence trillions of DNA bases.”“Because we could now analyze thousands of larvae at a much finer resolution than was previously possible,” says Kiflawi, “we could now zoom in on ecological differences between species. If the larvae of one family of fish had been presumed to live in both shallow and deep waters, we could now see that some species in the family prefer the shallow waters, while others prefer deeper waters – a difference that can affect their survival and dispersal.”The findings also solved several mysteries – for example, the invasion into the Mediterranean of a small puffer fish known as a Spiny blaasop. The adult fish live at depths of several hundred meters, yet they presumably cross over through the Suez Canal, which is only around 25 meters deep. The study shows that the larvae can dwell in the shallows, and it is probably these that have moved along the shipping lanes. The sampling also turned up larvae of fish that are found farther south in the Red Sea, but not in the gulf. This finding raised new questions about why these larvae do not make it to adulthood there.Sorek: “Although the initial process was a bit arduous, we now have an excellent tool for monitoring the health of the reef ecosystem and other reef researchers may follow suit.”