Religion and the State of Israel: Let that woman go!

Tzviah Gordetski spends most of her days opposite the Knesset, trying to catch the attention of passersby, particularly MKs. 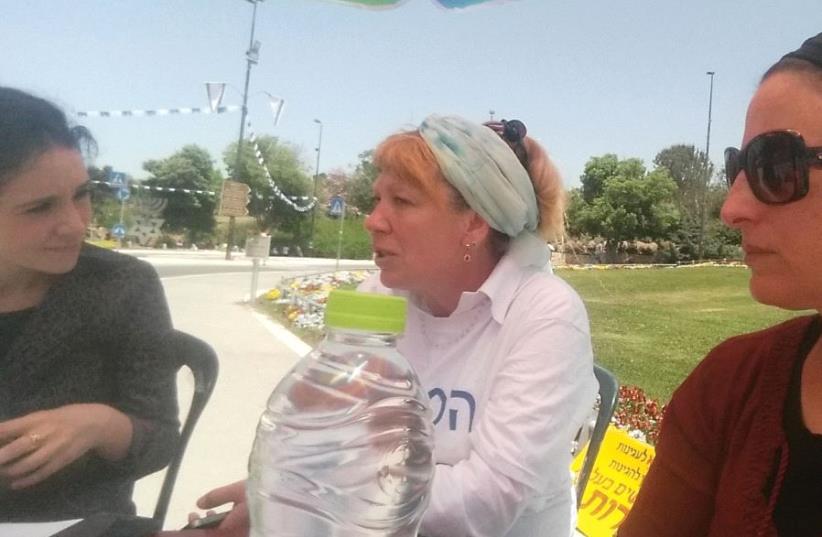 Tzviah Gordetski (center, outside the Knesset with supporters): ‘Why isn’t the State of Israel protecting me and providing me with the freedom I deserve?’
(photo credit: SHOSHANNA KEATS-JASKOLL)
Advertisement
On May 3, the morning after Independence Day, a distraught woman appeared on the sidewalk facing the Knesset and started a hunger strike.Tzviah Gordetski, 53, stood there all day long – and virtually every day since – asking the state to give her her freedom back. Gordetski has been held captive for 17 years by a recalcitrant husband who prefers sitting in jail to giving her a get (divorce according to Jewish law) and she wants the Knesset to approve a bill that could set her free.

She says that vindictiveness and bureaucracy have dragged her into a prolonged nightmare in which she is the prisoner of a husband who, imprisoned, cannot support her (and would not anyway). Because working would cause her to lose her National Insurance Institute rights, she remains unemployed and lives in poverty.By rabbinic law, a divorce must be granted by the husband. In many cases, a husband will leverage this power to pressure his wife into a disadvantageous divorce resolution. Despite many improvements promoted by the rabbinical courts, the situation is still problematic for too many women.The worst cases are those of the mesuravot get, whose husbands openly refuse to give a divorce. A husband cannot be forced to consent to a divorce, but rabbinic law provides means of coercion, as in the case of Gordetski’s husband, who will remain imprisoned until he agrees to grant the divorce. This extreme measure has proven effective in many cases, but has so far had no impact on him; this is his 17th year in jail, and no divorce is forthcoming.Gordetski and her husband made aliya 25 years ago from Kiev, then part of the Soviet Union and today in Ukraine.“Upon reaching Israel, we decided to have a real Jewish wedding with huppa and kiddushin,” she relates, adding that since then she has become religiously observant.“The problems started from the beginning. He couldn’t get steady work as a ship engineer and our economic situation became precarious.” Financial difficulties led to acts of violence and things quickly deteriorated further.“He moved out of the house, but used to take all of my salary for his own needs, leaving the children and me – by then we had three boys – in a difficult situation. When I said I wouldn’t tolerate it anymore, he broke into the house and threatened to kill me. He forced me to withdraw my complaint at the police, promising he wouldn’t bother me anymore. I believed him; did I have a choice?” Gordetski opened a small day-care facility in her apartment, registered at the municipality, and earned her living through hard work, taking care of up to 10 babies. By then, she needed help from the authorities, and went to the city’s welfare administration. When she was asked to have her husband sign a declaration that he was not opposed to sending one of the sons to a Chabad yeshiva, he attacked her again.Unwilling to prolong her suffering, Gordetski seeks prompt and courageous action from the authorities. A recent initiative that could be a possible light at the end of the tunnel is a halachic option to annul the Jewish wedding.Promoted by a group of religious women conversant with Halacha, the solution addresses the situation from both a Jewish and feminist angle.Zahava Fisher, a leading figure in this initiative, explains that when specific conditions are met, Jewish law enables annulment of an engagement. In such a case, the dayanim (rabbinical court judges) can declare that due to circumstances, the marriage sanctification is null and void. Being nonexistent, it does not require a divorce.“We have presented our proposal to the Knesset committee for the status of women,” says Fisher. “Scholars have done exhaustive work on the matter. It is in full accord with the strict requirements of Jewish law and provides an answer to extreme cases like Tzviah’s, whose husband apparently will never give her a divorce.”Somewhat ironically, the Knesset committee is headed by MK Aida Touma- Sliman (Joint List), a Christian Arab.She has expressed willingness to help bring the matter to debate. The proposal is supported by Social Equality Minister Gila Gamliel (Likud) but is strongly opposed by United Torah Judaism and Shas, the haredi parties in the coalition.“If there is a call for coalition discipline,” says Fisher, “there is no chance this proposal will be brought to a vote at the Knesset, but we are still trying to convince MKs – especially from the opposition benches – that the fate of Tzviah and other women has to be their major concern.”On Sunday (May 6), the scheduled preliminary debate on the bill at the Law and Justice committee was canceled at the last moment, as Justice Minister Ayelet Shaked was overseas.Gamliel explained that she wanted Shaked to declare her position on the matter in order to enhance the chances of the bill to pass.Meanwhile, Gordetski is still spending most of her days opposite the Knesset, trying to catch the attention of passersby, particularly MKs, with whom she wants to discuss what is at stake and why this bill is so important.“I have two sons serving in the IDF,” she concludes, “and two older sons that have already completed their military service. My four sons protect the State of Israel, so why isn’t the State of Israel protecting me and providing me with the freedom I deserve?”