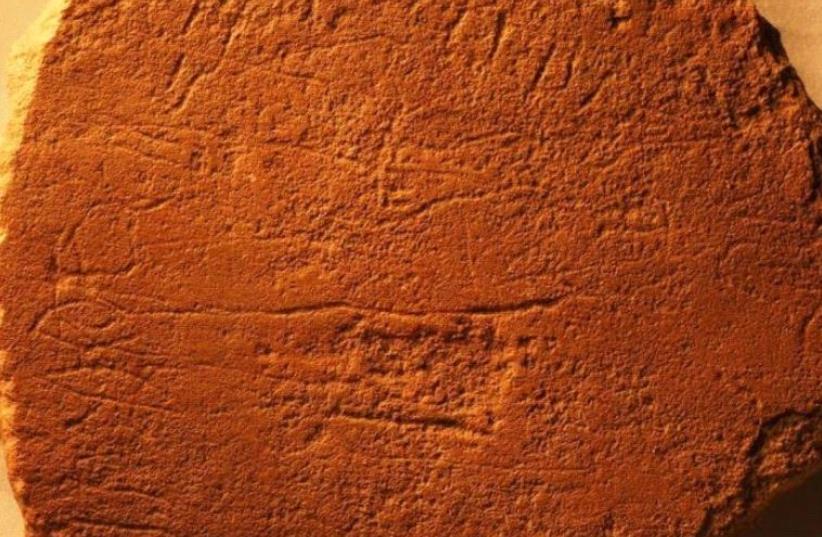 ONE OF the ancient Egyptian stone slabs inscribed with the name Ahisamach, from Exodus 31:6, used by Petrovich in his research.
(photo credit: COURTESY OF DOUGLAS PETROVICH)
Advertisement
Hebrew, resurrected by Eliezer Ben-Yehuda during the late 19th century after having been considered a dead language, may contain the oldest alphabet in the world, a Canadian expert contends.According to Douglas Petrovich, an ancient-inscription specialist, archeologist and professor of Egyptian history at Wilfrid Laurier University in Ontario, more than 3,800 years ago Israelites enslaved in Egypt invented the alphabet using roughly two dozen Egyptian hieroglyphs.While critics argue that the original alphabet likely derived from a grouping of Afro-Asiatic languages – including Akkadian, Aramaic, Phoenician, Ethiopic and Hebrew – Petrovich claims that an inscription discovered on an ancient Egyptian stone slab in 2012 proves his case.The slab in question, known as Sania 115, dates from 1842 BCE and is on display at Harvard’s Semitic Museum. It identifies Joseph and his two sons, Ephraim and Manasseh, and is inscribed with the words “6 Levantines: Hebrews of Bethel, the beloved.”“I was translating Middle Egyptian and proto-consonantal Hebrew inscriptions that nobody ever had translated successfully before,” Petrovich said during a recent interview with Fox News. “There were many Aha! moments along the way, because I was stumbling across biblical figures never attested before in the epigraphical record, or seeing connections that I had not understood before.”“On this otherwise Middle Egyptian caption were a Canaanite syllabic and the world’s oldest attested proto-consonantal letter ‘B,’ depicting a house for the Hebrew consonant ‘bet,’” he said. “It was this single proto-consonantal Hebrew letter that helped me to understand that the world’s oldest alphabet – the language of which has been unidentified for over 150 years of scholarship – is Hebrew.”Petrovich said he subsequently translated 16 more Hebrew inscriptions from four other ancient slabs discovered in Egypt and Sinai, including one from 1446 BCE, which describes Moses as a figure heralded by the ancient Jews shortly before he led the exodus from Egypt.“I absolutely was surprised to find the Moses [reference], because he resided in Egypt for less than a year at the time of his provoking of astonishment there,” Petrovich told Fox News.After exhaustive research to determine whether the combination of letters could have other meanings, the researcher said he eliminated all possible options.“Only after realizing that every other possibility had to be eliminated, whether due to contextual or grammatical limitations, was I forced to admit that this word must be taken as a proper noun and almost undoubtedly refers to the Moses who is credited with writing the first five books of the Hebrew Bible, known as the Torah,” he said.While conceding that his research has been met with considerable cynicism from fellow scholars, who state that biblical dates are unreliable, Petrovich contended that the onus is on them to prove him wrong.“My discoveries are so controversial because, if correct, they will rewrite the history books and undermine much of the assumptions and misconceptions about the ancient Hebrew people and the Bible that have become commonly accepted in the scholarly world and taught as factual in the world’s leading universities,” he said during the interview.“To my skeptics, I say: ‘Continue to be skeptical. Do not accept my conclusions until you are convinced they are correct.’” Petrovich added: “Truth is un-killable, so if I am correct, my findings will outlast scholarly scrutiny.”