In an exclusive interview with the Jerusalem Post Magazine, Nir Barkat lambasts international condemnation of Jewish construction in capital. 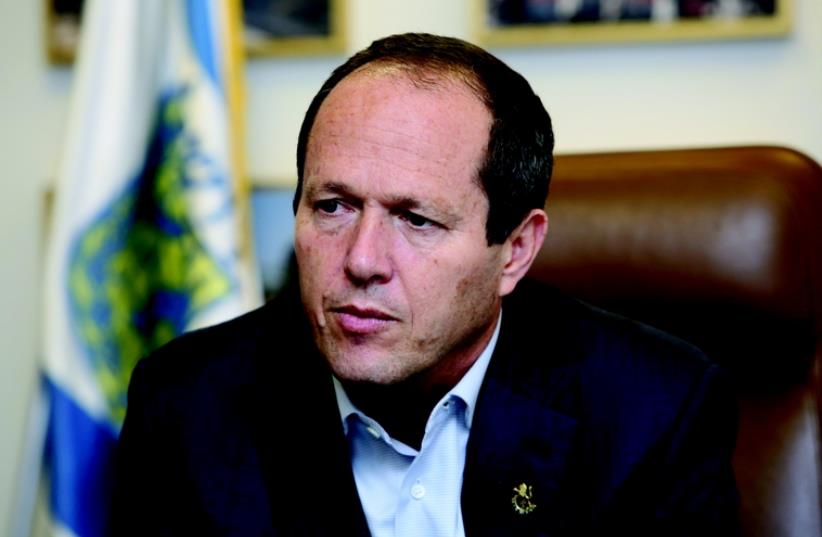 Nir Barkat
(photo credit: MARC ISRAEL SELLEM)
Jerusalem Mayor Nir Barkat dismissed ongoing international pressure to freeze Jewish construction in the capital as unconstitutional, impractical and nonsensical in an exclusive interview with The Jerusalem Post Magazine.During a recent interview with the Magazine and Editor-in-Chief Yaakov Katz, Barkat discussed critical issues facing the capital, ranging from construction, security and the economy to his political future.The interview, to be published Friday, reveals candid insights from a man who many are speculating has his sights set on the premiership.While Barkat addresses such speculation – which peaked after he joined the Likud Party – he emphasized far more important matters he regularly contends with that continue to challenge the capital.
Anti-Israel protesters crash lecture of Jerusalem mayor Nir Barkat in San Francisco , California , US in April 2016
The mayor regards American and international pressure to freeze Jewish residential construction in Jerusalem as shortsighted.“They’re missing two things,” he said. “When the American administration or the Europeans come and talk about freezing building in Jerusalem, I pose [a few] questions for them: ‘Freeze all the infrastructure for the Arab residents? Freeze building the schools? Do not give the Arabs [building] permits? Do you mean freeze everything? “Or, God forbid, do you mean that I have to ask somebody whether he is Jewish or not to determine whether I freeze his construction? Is that according to the Constitution of the United States? You want to tell me that I, as mayor of Jerusalem, have to differentiate between Jews and Arabs for the building permits?” Despite the ongoing conflicts in the capital, Barkat says that diversity in Jerusalem is a pro, not a con.“By design, Jerusalem is built to host and include all tribes – Jews and non- Jews alike,” he said. “That was the role of Jerusalem 3,000 years ago. It was the only place that was not given to any specific tribe. It belonged to all.“And the philosophy of leading the city in the future is about a deep understanding that there is a role for everyone here. And if someone is not included in the city, then the city is not functioning well.”The full interview will be featured in the Friday Magazine.