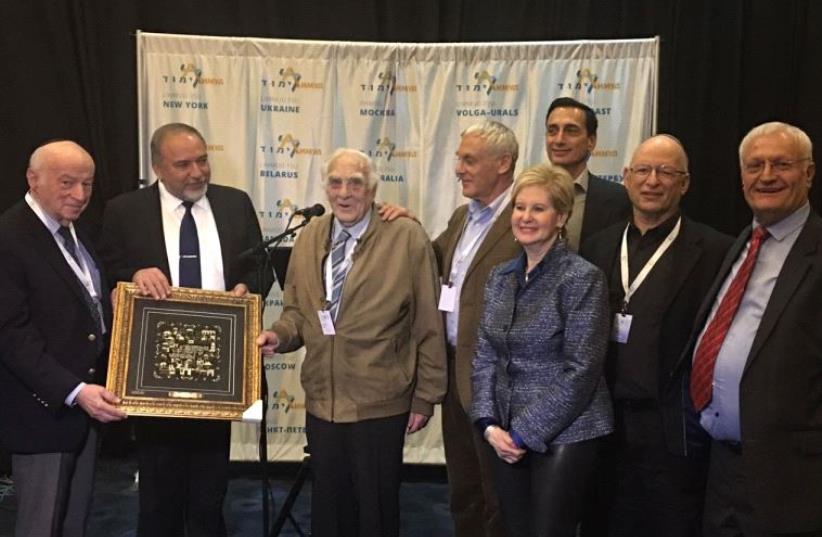 Board chairman of the Claims Conference Julius Berman, Avigdor Lieberman, Baruch Shuv that was presented a honorary Limmud FSU award,Yossi Shuv, Limmud FSU co-founder Sandra F. Cahn ,Matthew Bronfman,Dr. Joel Rappel and Limmud FSU founder Chaim Chesler
(photo credit: COURTESY LIMMUD FSU)
Advertisement
More than 2,000 Russian- speaking Israelis joined Jewish luminaries in Eilat for a three-day Limmud Former Soviet Union (FSU) conference to network, attend dozens of lectures and celebrate the organization’s 10th anniversary.Businessman, philanthropist and chairman of Limmud’s steering committee Matthew Bronfman, described the exponential growth of the organization as a “movement,” at the Red Sea resort conference location that featured stunning vistas of the Jordanian mountains.“We see this incredible growth for Limmud, which is very, very exciting, and we’re looking to do even bigger and better,” he said, following his Friday night lecture on the contentious US presidential election.“It has really become a movement,” Bronfman said. “It’s not just a series of conferences; Limmud FSU has become a movement, and we’re going to continue to grow it.”Bronfman said he views Limmud as a logical progression to his late father Edgar’s work aiding Russian Jews flee the former Soviet Union during the Refusnik era.“Then it was ‘Let our people go.’ Now, it’s ‘Let our people know.’ After so many years of what happened in the former Soviet Union, when Jews weren’t allowed to learn anything – also, you can see in the Diaspora too many people are not giving their children a Jewish education – we need to promote learning throughout the world, and that’s Limmud,” he said.Bronfman continued: “The next challenge is making sure we continue to provide Jewish homes and Jewish ethics and Jewish morals for our children.”In the 10 years since its inaugural conference in Moscow when the non-profit was founded by former Jewish Agency treasurer Chaim Chesler, and New York philanthropist Sandra Cahn, Limmud FSU has attracted over 50,000 participants in nearly a dozen countries.The grassroots organization’s mission is to empower young Russian-speaking adults whose families’ Jewish identities were once obscured by communism to learn about their history through pluralistic, egalitarian, volunteer- driven conferences of Jewish learning and culture.Key partners include the Claims Conference, Bronfman, Aaron Frenkel, Michal Grayevsky, Ronald Lauder, Diane Wohl, the Jewish National Fund (KKL), UJA-Federation of New York, Israel Bonds, the Jewish Agency and others.According to Chesler, the organization’s ultimate goal is to galvanize the next generation of Russian-speakers to revitalize Jewish communities in the former Soviet Union and in countries with Russian-Jewish groups.Noting that the conference, which featured a speech from Defense Minister Avigdor Liberman, sold out four months beforehand to record attendance, Chesler said Limmud’s success has exceeded his expectations.“We are so proud and we always make sure that the program is better every time.We bring more interesting lectures on more interesting issues and are not afraid to touch sensitive topics,” he said.“Right now,” Chesler said, “we’re thinking about the next decade. About how we can be better, more sophisticated, and better serve our people, how we can be better Jews connected to our history, to the Jewish people, and connected to the State of Israel.”Former ambassador to Italy, Gideon Meir, attended the conference with his wife, Amira, both of whom lectured.Meir said this was his sixth Limmud conference.“When I was in the Foreign Ministry I helped [Limmud FSU] financially, because I think that what they are doing is bringing closer young generations of Jews from the former Soviet Union to Israel and to Judaism,” he said.“Let’s put it this way: First to Judaism and then to Israel, which is also important. Therefore, the role of Limmud is uniting us as Jews, and you see the young generation coming here. I saw them in St. Petersburg. I saw them in America. It’s something that is really fascinating and also strategically very important to the Jewish people and to Israel.”One of those young people was Mira Kamenskaya, a 23-year-old recent immigrant from Moscow and social work major at Sapir Academic College outside Sderot. As she waited with friends in line to check in at the Leonardo Plaza Hotel on Thursday evening, Kamenskaya said she felt compelled to attend after hearing praise about the conference series.“This is the first time I took part in Limmud and I came because I heard from a lot of people that this event is very important for the Russian- speaking Jewish community in Israel,” she said. “Also, I heard it is amazing and a great experience, so I wanted to participate.”Olga Lazar, an internal medicine physician who emigrated from Moscow six years ago, held her three-monthold daughter after attending a Friday lecture on Jewish history.“This is my second Limmud, and it is very interesting because I’m getting a lot of fascinating information and meeting new people,” said Lazar, who traveled to the event with her husband and daughter from Petah Tikva.Noting that her parents were forbidden to practice Judaism under communism, Lazar said Limmud is helping usher in a renaissance among tens of thousands of young Russian-speaking Jews whose families were denied access to their heritage.“I was very young during communism, but my parents and grandparents said it was extremely difficult to practice being Jewish,” she said. “A lot of people were scared then. With Limmud, I have dozens of lectures to choose from to learn what my family could not.”