US ambassador to Israel honors Hadar Goldin’s memory in Jerusalem 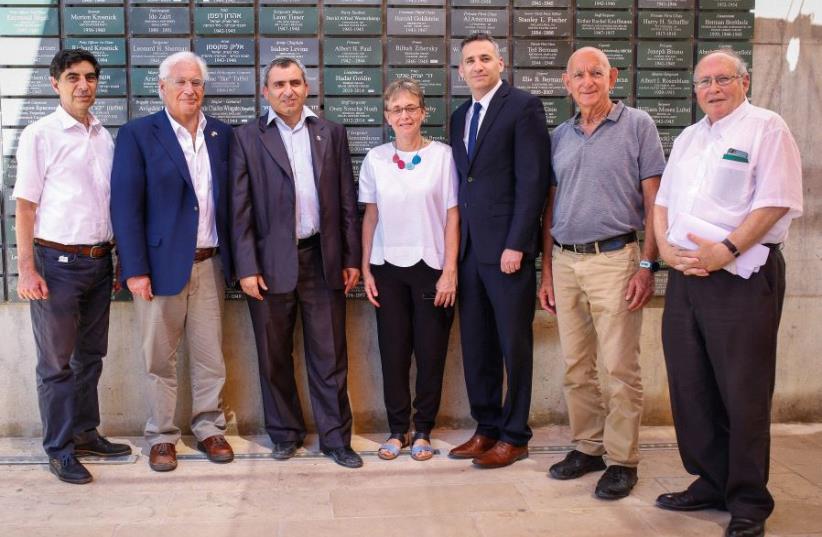 From the left: Simcha Goldin, US Ambassador to Israel David Friedman, Jerusalem & Heritage Affairs Minister Zev Elkin, Leah Goldin, Chief Israel Officer, JNF-USA Eric Michaelson, CEO of Ammunition Hill Katri Maoz, Vice President of the Supreme Court of Israel Elyakim Rubinstein
(photo credit: JEWISH NATIONAL FUND – USA)
A plaque was dedicated to fallen IDF soldier Lt. Hadar Goldin on Sunday at Jerusalem’s hallowed Ammunition Hill Wall of Honor in a ceremony attended by friends and family as well as US Ambassador to Israel David Friedman.The Wall of Honor, which was erected by the Jewish National Fund, recognizes Jewish soldiers worldwide who have died defending their home countries.Goldin was killed in August 2014 during Operation Protective Edge, after he was captured by Hamas terrorists in the Gaza Strip during a US-brokered cease-fire. His body has yet to be returned to his family, which has sparked international outrage among Jewish communities.Friedman condemned Hamas for refusing to return Goldin’s body to his parents for burial, adding that the US is committed to defeating what he dismissed as an “evil terrorist organization.”“The pain of [Goldin’s] parents is unforgivable and unspeakable, and we hold Hamas responsible,” he said.“The United States is very clear that Hamas is a terrorist organization, and a brutal and evil organization, and the US is committed to defeating Hamas and we’re committed to ending the suffering of Israeli parents – and any of those who have suffered from their acts of terrorism.”The newly designated ambassador added: “I have no interest in [negotiating] with [Hamas] directly, but they will be defeated. I’m certain of that.”Goldin’s mother, Leah, whose parents survived the Holocaust, discussed the tumultuous three years her family has endured attempting to procure his body for proper burial on Mount Herzl.“He was ambushed and killed during a cease-fire brokered by the US and UN, so he was a victim of a ceasefire and is still being held by Hamas as a bargaining chip,” she said, adding that her family received nominal support from the UN and the US until the Trump administration.“Now we see a new horizon with the new administration,” Leah Goldin said. “This [administration] is totally different; they are open to listen and feel responsibility. They understand that Hadar’s case is a basic humanitarian issue that affects all religions... so now this is a precious opportunity for them to demand his unconditional return.”Arsen Ostrovsky, executive director of research at the Israeli-Jewish Congress, spoke at the event and condemned the lack of international outcry regarding Hamas’s refusal to return Goldin’s body.“Where is the outrage from the international community?” he asked, adding: “The same international community was up in arms recently over the Palestinian prisoners on hunger strike in Israel. But again, only silence when it comes to the lives of Israelis.”Vivian Grossman, who serves on JNF’s national board, said it was important for the organization to honor Goldin and his family.“The Wall of Honor is where Jewish soldiers are honored and recognized, and it’s not a memorial, it’s a living wall – a tribute to Jews who fought for their country,” she said.“And we thought it is important that Hadar’s name be up there because not only is he a hero and a soldier who fought with courage. More than that, once this is resolved and he’s brought home, Jews the world over should never forget what this family has been through.”