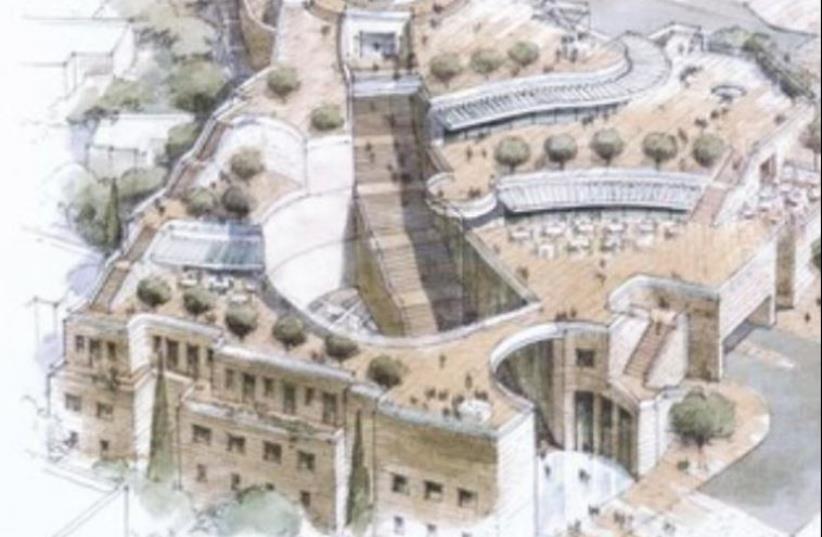 An artist's rendition of the proposed Kedem Center
(photo credit: ELAD)
Advertisement
A Jerusalem District Court judge rejected an appeal this week from the right-wing NGO Ir David Foundation (Elad) to build a larger version of its proposed Kedem Center, a highly contested visitors’ compound and archaeology museum, to be operated in east Jerusalem’s Silwan neighborhood.Approval for the center, which will be constructed outside the Old City’s walls, has a long and contentious legal history.In June, the court approved, but ordered a scaled-down version of the proposed 1.6-hectare (four-acre) compound, after reviewing the left-wing NGOs’ Ir Amim and Emek Shaveh’s joint petition to block it entirely.In its ruling, the National Planning and Building Appeals Committee ordered that the compound – to be located south of the Dung Gate over the Givati Parking Lot, and include a museum, large atrium and multiple offices – be scaled down to 0.8 hectares.Elad promptly appealed the decision, which was upheld Tuesday.While Elad, which operates the City of David National Park, contended that the center would be instrumental in drawing tourists by housing ancient archeological findings, the opposing NGOs denounced the center as destructive.In their January petition, the European-funded organizations had claimed the center would result in “destruction and damage to the fabric of ancient Jerusalem” by harming relics located under the building, while contributing to the “Judaization” of east Jerusalem.Meanwhile, Elad – which intends for the structure to serve as the entryway for visitors to the Jerusalem Walls National Park, including the City of David, Mount Zion and Ophel and Hulda Gates – said the center will strengthen the capital by celebrating its shared history.While conceding that the committee’s June ruling to revise and resubmit the center’s blueprint to limit the center’s scope “will detract from the visitor experience,” Elad nonetheless lauded the outcome for rejecting many of the central claims laid out by the opposition.A spokesman for Elad did not comment on Tuesday’s ruling.