Lawmakers urge dialogue instead of legislation. 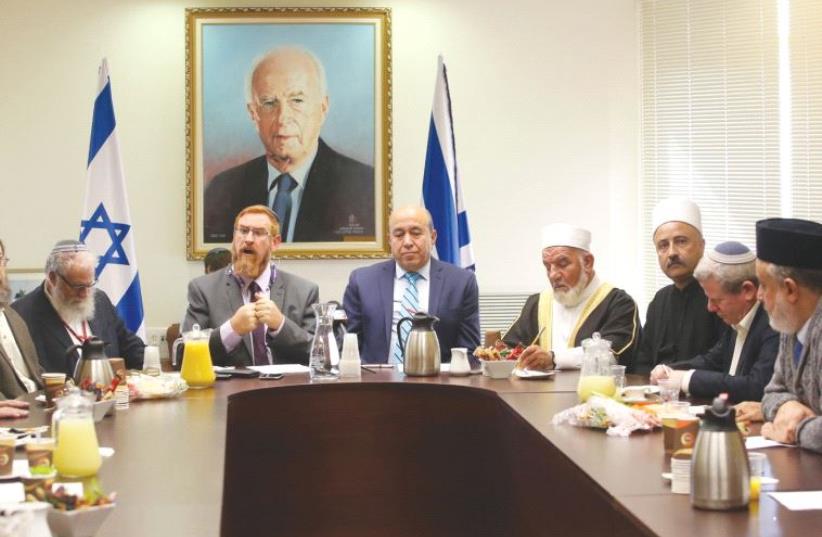 MKS YEHUDAH GLICK (rear left) and Zuheir Bahloul lead a conference at the Knesset yesterday, which was called in response to a proposal to ban religious institutions from using outdoor loudspeakers
(photo credit: MARC ISRAEL SELLEM/THE JERUSALEM POST)
Advertisement
Legislation restricting the Muslim call to prayer to hours that do not disturb the public will cause more harm than good and should be replaced with dialogue, Jewish and Muslim religious leaders told a Knesset conference Monday called by MKs Yehudah Glick (Likud) and Zuheir Bahloul (Zionist Union).“Legislation does not need to manage our lives; true dialogue should,” Bahloul said. “The cooperation between MK Glick and me is the essence of ‘yes’ to understanding and dialogue and ‘no’ to antagonistic and forceful legislation.”Bahloul and Glick called the conference in response to a proposal by MK Motti Yogev (Bayit Yehudi) to ban religious institutions from using outdoor loudspeakers, which would primarily impact mosques. Yogev agreed to amend his bill so that the ban would be in effect only from 11 p.m.-7 a.m., such that it would not apply to the pre-Shabbat siren in haredi communities on Friday afternoons, but would apply to the muezzin’s pre-dawn call to prayer.Glick said the religious people attending the conference “have God in their hearts,” which allowed them to talk and seek peace.“Many people wanted to prevent this conference... but we are not here to be forceful; we’re here to make agreements,” Glick stated.Committee of Imams in Israel chairman Sheikh Muhammad Cayuan said that creative solutions can be reached through dialogue, but that forced solutions – like passing a law – will not be accepted.Former Chief Rabbinate director- general Oded Wiener, who is currently an adviser to the chief rabbis, said it pains him that people think their religion is being violated.“Chief Rabbi David Lau asked me to say that this is not a religious matter, it is a matter of being a good neighbor. There are solutions that can be implemented tomorrow. The law shouldn’t exist; we have a very delicate fabric to our shared lives, and we have to protect it,” he stated.Representatives from Acre presented their city as an example of the possibility of reaching agreements. After an incident of violence between Jews and Muslims when Yom Kippur, a fast day, and Eid al-Adha, a day on which Muslims kill and barbecue a lamb, coincided, religious leaders held a dialogue.There are currently agreements on how to behave, including in regard to the muezzin.Rabbi Yisrael Samet of Lod said attempts to talk to Muslim leaders about lowering the volume of the call to prayer in the city fell on deaf ears. “The law is meant for people who refuse to compromise,” he said.Former rebel Shas MK Rabbi Haim Amsalem said he enjoys the sound of the muezzin, and Sephardic liturgy is inspired by it. However, he said, he does not want to hear it at dawn.“Why not send a Whatsapp message calling to pray, instead?” Amsalem asked.At the end of the meeting, attendees agreed to a resolution calling to remove the bill from the Knesset’s agenda.“The right to religious worship is God-given and not a matter of legislation. This right was also recognized in the Declaration of Independence,” the resolution reads. “We want to see a dialogue between the sides. We do not deny the right of the muezzin to call to prayer, as is commanded by Islam, on the one hand, and on the other, we call to find implementable solutions... to the call at dawn while taking the whole population into consideration.”The resolution suggests instead of passing a law, local committees of religious leaders be formed in every municipality to reach agreements, as well as an interreligious committee in the Prime Minister’s Office that will receive complaints on the issue and mediate.Yogev’s office said the MK proposed the bill only after two years of trying to help negotiate compromises in different areas. The attempts at compromise apparently failed to encourage the observance of existing municipal bylaws that already limit the decibel level of mosque loudspeakers, but are not enforced.