The conference was attended by clerics and dominant figures from the two religions. 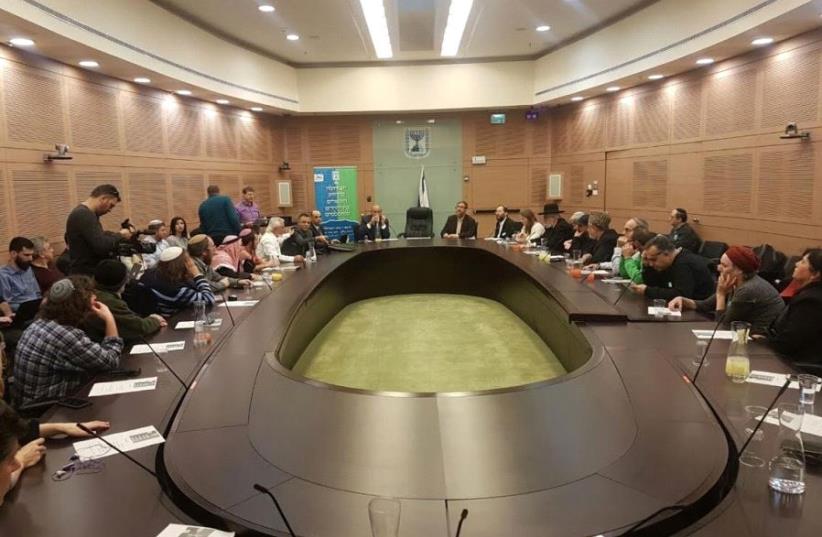 Knesset inaugurates Jewish-Muslim ties caucus
(photo credit: Courtesy)
Advertisement
MKs from across the spectrum gathered in the Knesset on Tuesday to inaugurate the Jewish-Muslim Ties Caucus, alongside religious leaders from both faiths.“There is nothing more valuable or stronger than this gathering here,” said MK Zouheir Bahloul (Zionist Union) at the event. The initiative, led by Bahloul and MK Yehudah Glick (Likud) started with a session about the value of life in Judaism and Islam.“We are now at a period in which hatred, alienation, stereotypes and prejudice are the dominant voice in our lives,” Bahloul added. “Now when we meet and try to create this form of productive dialogue – which is a direct continuation of the meeting we held before [on the ‘muezzin bill’], I see it as a ray of hope that could revive the faith of coexistence in our shared land.”The conference was attended by clerics and dominant figures from the two religions, including Dr. Ziad Zahalka, the chief qadi of the sharia courts in Israel, former chief rabbinate director Oded Wiener, Sheikh Muhammad Sharif, head of the Ahmadi group in Israel, and Chief Rabbi of Dimona Yitzchok Elefant.Glick said this kind of initiative could affect the whole region and promote the establishment of viable peace. “Peace is not just a comfortable solution that would prevent us from fighting, it is much deeper,” he said. “Peace is the name of god. We must have this discussion here because there are people who defame Judaism and Islam with no reason.We hope peace will spread from here to the rest of the world.”Knesset Speaker Yuli Edelstein congratulated the Knesset members for the initiative and expressed his concerns about the widening gap between Jews and Muslims in Israeli society. “I want to say that I am happy that we established this caucus, but it is not quite right. I would like to live in a reality in which we won’t need to have such initiatives,” he said. “Why do we need caucuses in order to talk with each other? Our reality is not perfect, unfortunately.The ongoing dividing public discourse in recent years is louder than the uniting one.“However, there is an attempt here to try and change the direction [of the public discourse] and I praise you for that,” said Edelstein. “Although both of you [Bahloul and Glick] faced loud objection, I am glad that you followed through with it until the end.”