A president's budget allows the White House to lay out its priorities for the year but is not legally binding. 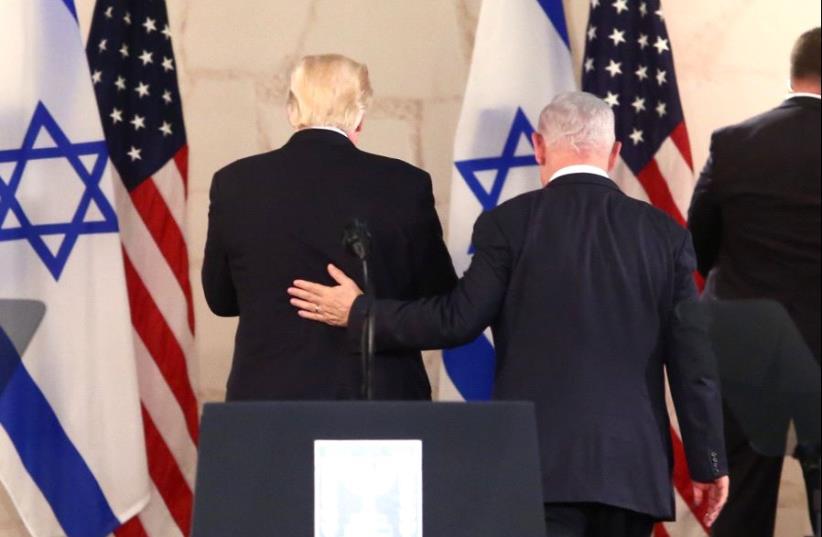 US President Donald Trump and Prime Minister Benjamin Netanyahu at the Israel Museum
(photo credit: MARC ISRAEL SELLEM)
Advertisement
Israel will receive $3.3 billion in funding from the United States under President Donald Trump's Fiscal Year 2019 budget request for the Department of State, a US official announced at a department briefing on Monday. Hari Sastry, the Director of the Office of US Foreign Assistance Resources at the State Department, noted that Israel will receive a bump of $200 million in aid under the proposed budget.The administration wants $39.3 billion for the State Department and the US Agency for International Development, a reduction of about one-third from 2017 spending, but proposed an increase in funding to its Middle East ally."[For] Israel, the total is $3.3 billion, which is a $200 million increase from the previous year and reflects the newly signed 10-year MOU [memorandum of understanding]," he said. In September, the US and Israel signed a 10-year MOU providing $38 billion in defense aid to Israel through 2028. The budget request explains the $3.3 billion request provides "assistance to bolster Israel’s capacity to defend itself and maintain its qualitative military edge."Sastry downplayed the role of December's United Nations vote slamming Trump's decision to recognize Jerusalem as Israel's capital and pledge to relocate the embassy there in any budget decision. "Our foreign assistance, the President and the Secretary [of State Rex Tillerson] continue to believe, should be aligned to US interests, so this budget certainly reflects that. Voting in multilateral fora is one factor to consider among many, but there are – if you look at our budget, it is focused on where we think the most appropriate assistance level should be based on where our security needs are."He reiterated that the vote was just "one factor" in deciding the funding requests.A fact sheet released by the Department of State in conjunction with the budget request noted "prioritizing funding" for the relocation of the embassy to Jerusalem.Under "Protecting US Overseas Personnel and Facilities," a sub-section of the category "Protecting America’s Security at Home and Abroad," the fact sheet states, "The Administration is also prioritizing funding for a US Embassy facility in Jerusalem which will begin once design and construction plans are finalized." The fact sheet provided no further details and no officials at Monday's briefing were pressed on the issue. The budget itself made no mention of the embassy move. Sastry noted during the briefing that Jordan will also see an increase in funding. "For Jordan, the total is $1.275 billion, which is a $275 million increase from the previous year and also does reflect the MOU that the Secretary – that we are in negotiation and the Secretary intends to sign."There is little chance of the budget being passed as proposed, as presidential budgets are rarely enacted by the US Congress, which legally controls government spending. Instead, the budget allows the White House to lay out its priorities for the year.Reuters contributed to this report.