Chef Avi Levy serves you his soul in a dish.

By MIRIAM KRESH
SEPTEMBER 27, 2017 16:13
Chef Avi Levy.
(photo credit: DAN LEV)
Advertisement
Chef and Jerusalem native Avi Levy, 41, has been in love with cooking since childhood. His mother and grandmother, superb home cooks, came from Algeria with a strong family and culinary ethic. In their home culture, to eat is to strengthen bonds. Traditional foods mark celebrations, mourning and festivals. Eating the home-cooked daily meals together is almost a sacred obligation, one the family delights in.“Our home has always been a house of food,” Levy says. “Traditional Algerian food. Our cooking has bold flavors and lots of seasonings. We routinely eat organ meats like spleen and sweetbreads, and use only the best raw ingredients.“In my home, it’s always important to present the food beautifully and to eat in a pleasant atmosphere. When I was about eight years old, I began watching my mother and grandmother cook. I saw their devotion, how carefully they performed every step. I watched until I decided that cooking is what I wanted to do.”
Read More...
Levy worked as a cook during his army service. “That’s where I learned to cook in large quantities,” he recounts. “By the time I left the army, it was part of me.”He became addicted to drugs as a youngster. It was a long phase; he was in and out of jail for drug-related crimes for seven years. With strong family support and a robust rehabilitation program, the future chef reconciled with his wife and family and put drugs behind him forever, but he was at a loss as to how to start life again.His sister, remembering his culinary talent, urged him to enter the Master Chef TV cooking competition, then in its second season. Winning the competition set him on the path to opening his first restaurant, Hamotzi, in Jerusalem. Later he received an invitation to cook for Prime Minister Benjamin Netanyahu and his wife, Sara.“They loved my food,” he says wryly, “But I cooked with a security guard at my elbow the whole time.”In past years, Levy has talked openly and at length about the dark days, but today prefers to leave the past to the past, attending to his fruitful present. Recently he opened a second restaurant in Tel Aviv, Chiripom, which means “happy food,” which like its Jerusalem counterpart gets rave reviews. I asked whether his Tel Aviv restaurant is kosher, which opened a conversation on Levy’s way of life today.“Although I don’t call myself religious, I’m strongly traditional and cook only kosher,” the chef says. “I keep Shabbat, up to a certain level. On Fridays nights, I always eat at my mother’s. She cooks a special fish dish for Shabbat: fresh tuna fish Algerian style, with chilies, coriander leaf, and garlic. I look forward to it all week long.“Shabbat is a special time, a holy time. I turn the phone off and enjoy one day of complete freedom from the stressful routine. Time for introspection, for being with my family. Suddenly, there’s time for the family. You see them, and they see you.”The father of four, Levy says “My oldest son sometimes comes to the restaurant and helps me cook. I don’t teach him, but he learns.”Levy himself travels abroad every year, visiting Spain, France, Italy and North Africa to garner new recipes and talk with fellow chefs. On his return, he experiments and perfects the dishes he learned for at least two weeks before putting them on his restaurants’ menus. His dishes combine Moroccan and Algerian influences, with his own flair.“I have my own ways. That is, I keep the food’s authenticity but put my own fingerprint on it,” he says. “You want to invest part of yourself in every dish.”Food feeds the soul, too, he maintains. “Everything needs to be done with love, even chopping the vegetables. The dish should be clean and well presented. Enthusiasm – without that, cooking doesn’t work. And it’s important to visit other kitchens and learn from other cooks.”You don’t need to follow gourmet recipes to cook well, he adds. He also laments that so many have lost touch with authentic food and cooking, depending on prepared foods.“Take a recipe, then go into the kitchen and try it out. Don’t use prepared foods; go for fresh. You can make great chicken fingers for your kids with fresh chicken breast. And what’s wrong with simple things like ptitim [short-cut pasta, popular with kids]? Or roast potatoes? Kids love them, and you have the satisfaction of giving them home-cooked food, the best.” 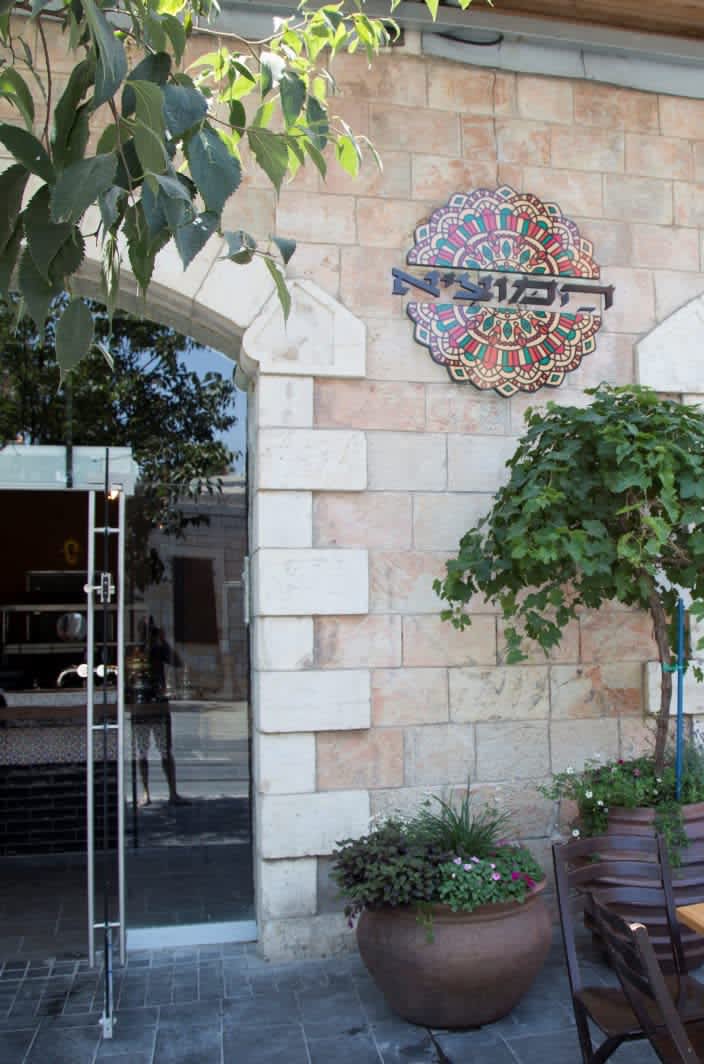 Hamotzi, which recently moved to a new location on Jerusalem’s Jaffa Road. (DAN LEV)The family presence is strong at Hamotzi. Levy’s mother, Miri, has a featured place, where she comes every day. She sits in an illuminated blue-tiled niche, making pastry for baklava and other delicacies, and is always happy to talk to you, although as a proud mother, it’s natural that she mostly extols her wonderful son.“She’s the soul of the place,” Levy says affectionately.The chef winds the interview up with thanks for his appreciative customers. “It’s not simple,” he says. “I really want to thank those who accompanied me in life and helped me make it a success.” 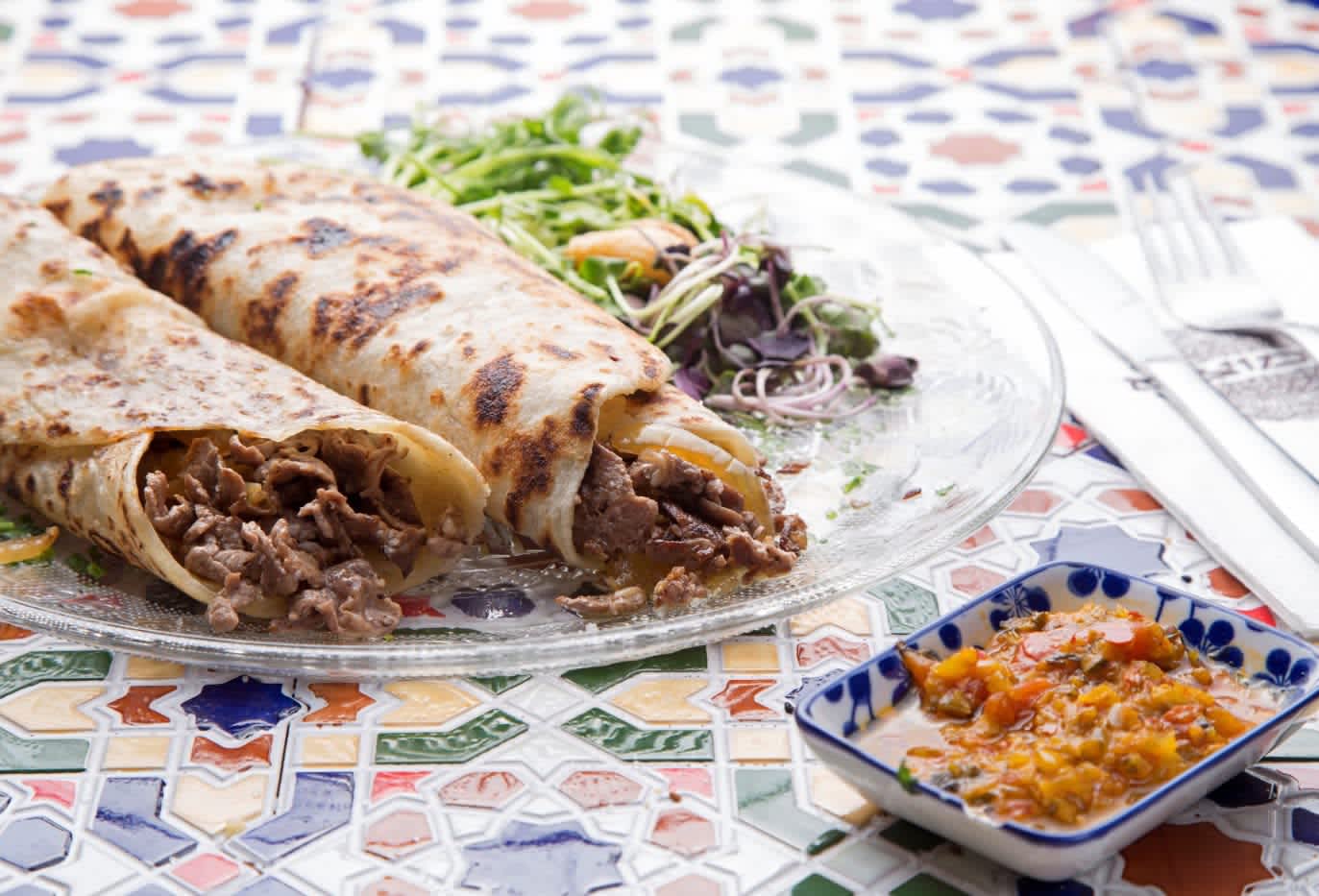 Savory moufleta crepes stuffed with chopped steak. (DAN LEV)Savory moufleta crepes stuffed with chopped steak
Serves 4For the moufleta dough:
1 kg. all-purpose flour, sifted
2 Tbsp. granulated sugar
1 Tbsp. coarse salt
600 ml. (2½ cups) room-temperature water Blend the flour, water and sugar in a mixture until you have a uniform mass. Add the salt. Knead the dough another two or three minutes.Oil a bowl lightly and place the dough in it. Cover and let it rest for 30 minutes.For the steak filling:
500 gr. fresh, prime-quality steak, sliced into strips no thicker than 1 cm.
1 large onion, sliced
salt as needed
a pinch of ground black pepper
2 tsp. granulated sugar
1 additional tsp. table salt
1 additional tsp. ground black pepper
1 teaspoon ground cumin
a little olive oil Pour the olive oil into a skillet and heat it. Fry the onion until it’s golden.Add the sugar and a little salt and pepper. Stir-fry the onion until it caramelizes, then remove it from the heat.Pinch balls off the dough, each one about the size of a large meatball.Roll each dough ball out as thinly as possible to make a crepe.Fry the crepes until speckled with brown spots.In a separate skillet, stir-fry the meat.Add the caramelized onions to the meat. Season all with the teaspoon of salt, the teaspoon of pepper, and the cumin.Fill the moufleta crepes with the meat/onion mixture and roll them up.Serve hot, accompanied by stir-fried vegetables or a salad.Note: Unless you have a very sharp knife and good knife skills, ask the butcher to put the steak through his slicing machine.