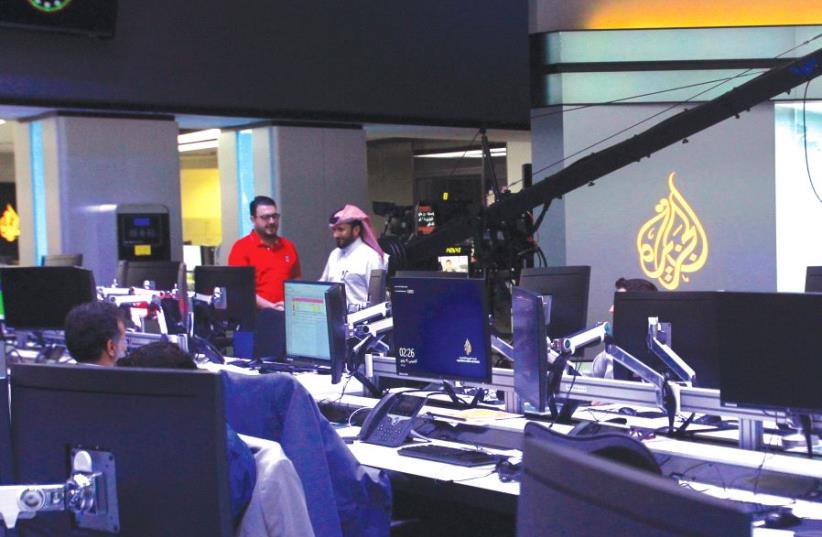 Staff work inside the headquarters of Al Jazeera Media Network, in Doha, Qatar, last month.
(photo credit: REUTERS)
Advertisement
Al Jazeera on Sunday suspended two of its journalists over video content they posted on Friday that questioned the “truth” of the Holocaust and asserted that “the Zionist movement benefited from it.”
The video and accompanying posts were swiftly deleted by AJ+ senior management from all AJ+ pages and accounts on social media, as it contravened the network’s editorial standards, Al Jazeera reported.
The controversial video was promoted in Arabic: “Gas ovens killed millions of Jews. That’s what the story says. What is the truth of the Holocaust and how did the Zionist movement benefit from it?” A woman who claimed to have taken part in making the video tweeted, “did Hitler kill six million Jews? And how did Israeli occupation benefit from extermination?” She also asked if Hitler had cooperated with Zionism. A link to the original tweet has been deleted.

Shimrit Meir provided a discussion on Twitter about the contents of the original. The video claimed “Israel is the No. 1 beneficiary from the Holocaust, using it as an excuse for ethnic cleansing and exterminating Palestinians.” In addition, the video said that the number of murdered Jews was debatable. The video asked why the world concentrates on Jewish suffering when 20 million people died in World War II, and claims the focus is due to Jewish organizations. According to Meir, 750,000 people saw the video on Facebook in the few hours it was up. “They posted it on a Friday night, after Iftar, on Ramadan. [They] wanted all the traction they could get, I guess,” Meir noted.

The holocaust according to Aljazeera‘s young and hype brand:
• Number of victims is debatable, some deny the extermination, some say it is exaggerated, some blame the Zionist movement for playing it up
>> https://t.co/8cXA5gbF2Z
— Shimrit Meir שמרית מאיר (@shimritmeir) May 18, 2019


Anshel Pfeffer of Haaretz tweeted that although he had done interviews on Al Jazeera in the past, it was “inexcusable now to be on it, that it’s officially endorsing Holocaust denial.”

I've done dozens of interviews on Al Jazeera over the years (both the Arabic and English channels). I always thought it was important to appear on the most popular Arab channel. Inexcusable now to be on it that it's officially endorsing Holocaust denial.https://t.co/9CO021gIJl
— Anshel Pfeffer (@AnshelPfeffer) May 18, 2019


The World Jewish Congress condemned Al Jazeera for the “horridly offensive article accusing Jews of exploiting the Holocaust for their own interests.”

Al-Jazeera published a horridly offensive article accusing Jews of exploiting the Holocaust for their own interests. It is an appalling and unabashedly antisemitic piece. It crossed all lines of decency and entered into the realm of blood libel. https://t.co/ZYSklT6cyA
— WJC (@WorldJewishCong) May 18, 2019

Many noted how Al Jazeera in English poses as progressive while its Arabic content is often filled with far-Right hatred similar to the Holocaust denial video. Ariz Kader notes that “This is the exact reason the channels were segmented this way, to appeal to both liberals and the general Gulf. Whose mistake was this?”

AJ+ Arabic strayed for a second into regular Al Jazeera Arabic territory with Holocaust denial before people noticed and the video was deleted.This is the exact reason the channels were segmented this way, to appeal to both liberals and the general Gulf. Whose mistake was this? https://t.co/Xvv2N8z1nA
— Ariz Kader (@KaderAriz) May 18, 2019


The Al Jazeera Media Network said it had “deleted a video produced by AJ+ Arabic because it violated the editorial standards of the Network.” As of Sunday, the network had not apologized. The video comes on the heels of other high-profile antisemitism media scandals. The New York Times atoned in late April for an antisemitic cartoon in its international edition.