Fadi grew up in Bethlehem and attended the Lycée Français in Jerusalem. His passion for cooking is rooted in memories of flavors from his grandmother’s kitchen. 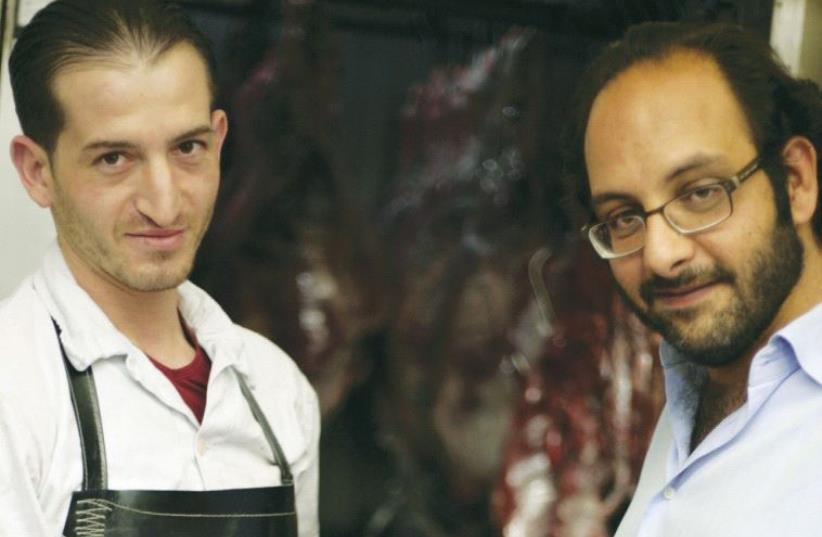 FADI KATTAN (right) makes a purchase from his butcher last week for his Hosh al-Syrian guest house in Bethlehem. (
(photo credit: ELIYAHU KAMISHER)
Advertisement
Fadi Kattan steps out of the entrance of the Hosh al-Syrian guest house and into the Bethlehem marketplace. In 50 steps he has reached his favorite herb and fruit vendor. Around the corner is Bethlehem’s best butcher, and in another 10 meters is his baker.“She brings these in from her farm in Artas, south of Bethlehem,” Kattan tells me as we examine the deep purple plums that went into today’s dessert.Kattan is the owner of the Hosh al-Syrian guest house and head chef of the boutique hotel’s Fawda Cafe, which provides locally sourced, high-end Palestinian cuisine.Prior to opening up Hosh al-Syrian around six months ago, Kattan worked for the PA Ministry of Tourism. However, he became tired of the straitlaced institution and sought to open his own boutique hotel, while also ditching his cellphone. “Work felt like an interrogation,” he tells me, “I was tired of being put into categories.”In Bethlehem’s Old City, Kattan has created a distinctly modern space housed in an ancient limestone building that cherishes traditional Palestinian culture and cuisine, yet tweaks them to a modern sensibility.Fadi grew up in Bethlehem and attended the Lycée Français in Jerusalem. His passion for cooking is rooted in memories of flavors from his grandmother’s kitchen, yet he honed his skills while studying hotel management in France.In Café Fawda, Kattan combines his French culinary background with inventive takes on traditional Palestinian ingredients and dishes. He has combed the small Palestinian farms that populate villages throughout the West Bank looking for the best ingredients, such as sumac which he sources from a village south of Bethlehem.
Grilled Shrimp with cactus fruit and chilli
Today’s four-course tasting menu begins with grilled shrimp imported from Jaffa served on a bed of cactus fruit jam and a hint of chili. “I had to tell the seafood importer to only call me when the fish is truly fresh!” Fadi exclaims.Nevertheless, Kattan’s updated take on traditional Palestinian dishes and ingredients sometimes ruffles feathers.“For some locals they are not used to the way we do things, it is very different for them,” Kattan explains, “We had a man who was upset about the grape leaves dish I served him, stuffed with figs and cheese instead of rice. I told him ‘just taste it.’” Still, well-educated and well-traveled Palestinians in their 20s through 40s do frequent the guest house and restaurant, where they can recline on the sundeck with views of the rolling hills toward Jerusalem, or rent a room at prices ranging from NIS 270 to NIS 535.As a chef, Kattan pays careful attention to what goes into his food and how it is prepared.“You shouldn’t buy the beautiful perfectly shaped tomatoes, they are from big farms, the small ugly ones are from the small farmers, they look ugly but when you cut them open you can taste the difference,” he states.The second course, scattered dramatically across a rectangular white plate is a play on musakhan, a traditional Palestinian dish of roasted chicken served with sumac and caramelized onions over taboon bread. At Café Fawda, the chicken is served instead as a pâté of chicken liver and hearts intermixed with sweet caramelized onions.For this dish Kattan had his baker make miniature versions of the taboon bread that is regularly served with dish. “It’s a headache to make such small breads, but he’s a customer,” Kattan’s baker tells me, while Kattan cracks a guilty smile.According to Kattan the best Palestinian food is usually found in the home, posing a challenge for visitors. “People come to Palestine and they think that all we have is holein- the-wall hummus joints… I’m trying to show that there is something more to Palestinian food.”The other problem, according to Kattan, is when Palestinian restaurants do attempt fine dining they tend to abandon Palestinian cooking and ingredients and instead poorly imitate European dishes.Kattan first noticed this trend in 2006 when he helped found the first Palestinian cooking competition. “Almost all of the finalist cooked European dishes!” he states with exasperation.For the third course Kattan brings out his favorite dish, a slow-roasted rack of lamb served over maftoul – a Palestinian couscous. The lamb has been aged for few weeks helping the meat to unveil a deeper flavor and tenderness.“I leave the maftoul as is, without adding anything, so you can really taste it,” he states.The rack of lamb was picked up right around the corner, but it was the aging process, which is unusual in Palestinian cooking that made the butcher a bit nervous. “They don’t age lamb that often, it is a bit weird for them,” Kattan tells me.Besides a restaurant and bar Kattan hopes to establish Hosh al Syrian as a center for Palestinian cultural events and a meeting place for different ideas and beliefs that may not always get along. “Everyone is welcome here, gay, straight, Christian, Muslim, Jewish, Confucius, whatever,” he states.
Poached plums, pistachio creme meringue
Over our last course - poached plums with meringue and pistachio creme - Fadi spoke about the challenges of being a chef in the midst of the Israeli-Palestinian conflict. Fadi has happily welcomed Israelis who dare to break Israeli law, which forbids them from entering Area A of the West Bank. However, he does draw a line at cooperation with Israeli chefs. “We are not equal, I don’t cooperate, because for the Israeli chefs their lives are so much easier, they don’t have to deal with an occupation.”But for the Jews and or Israelis who keep kosher, Fadi keeps an extra set of vegetarian pots and pans waiting for them.