How did one of the world’s poorest countries build state-of-art drones?

Despite their Isolation, the Houthis are able to produce drones and other equipment they seemingly should not be able to. 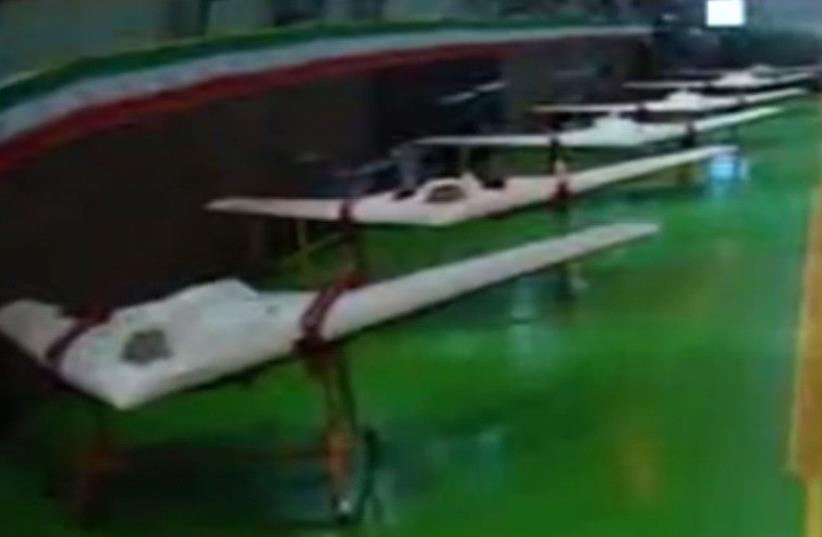 iran's Revolutionary Guard equipped with new drones
(photo credit: IRANIAN MEDIA)
Advertisement
Iran has a story to tell and it’s all about drones. But not Iran’s drones. The drones supposedly built in Yemen by the Iranian-allied Houthi rebels.
There was a time when that alliance was not as open as today. But on September 26 Press TV in Iran revealed that the Houthis had built eight different indigenous drones that have “changed the military equation” in the war with Saudi Arabia.The article leads to questions about how one of the poorest countries in the world, in the midst of brutal armed conflict, built all these drones, when many countries that are far wealthier cannot make their own drones.According to Press TV in Iran, the Houthi Arabic news station Ansarullah reported that the Houthi forces have 11 missile systems, some of them “completely indigenous.” One of them is the Quds-1 winged missile, which can travel 1,700 km., the sources claim. The article also claims the Houthis have “eight combat and surveillance drones the Yemeni army has produced during the war.” The article admits that some of these weapons are based on developing weapons based on older Russian weapons that were available locally.An article at ArmsControlWonk.com notes that one of these weapons is the Iranian Soumar cruise missile. “The Soumar and its updated version, the Hoveyzeh, are Iran’s attempts at reverse-engineering the Soviet-designed KH-55 cruise missile, several of which the country illegally imported from Ukraine in the early 2000s. Others claimed it was the Quds 1, a recently unveiled Houthi cruise missile often claimed to be a rebranded Soumar.” There are real differences, author Fabien Hinz, points out. While observers claimed the Quds 1 was merely a Soumar smuggled directly from Iran, the missile has been changed by the Houthis. “This leaves the question of just who developed and built the Quds 1. The idea that impoverished war-torn Yemen would be able to develop a cruise missile without any outside assistance seems far-fetched.” Indeed.The Houthis also have an arsenal of “Burkan” missiles that are alleged to be modified Soviet R-17E Scud rockets, according to a piece at The National Interest. The Burkan is 1.5 meters longer and can fly an additional 800 km. Are these Houthi rockets just a modified version of the Russian missile, or a modified version of its North Korean counterpart called the Hwasong-6?The Houthis, despite being isolated, certainly seem to have access to all sorts of goodies. The Quds 1 has a Czech TJ100 engine, according to reports. These engines are apparently ideal for drones or UAVs. They’ve been spotted on Iranian-made drones, the website Ars Technica says. Yet the UN estimates that Yemen is heading toward becoming one of the poorest countries in the world. It also has a diverse and interesting fleet of military drones being used to confront one of the wealthiest countries in the world. The Press TV article provides a list.The drones include the “Hod Hod,” a surveillance drone that ca fly for an hour and a half and go 30 km. Another, called the Raqib, uses “laser technology” and can fly 15 km. The Rased can fly for 500 km. to conduct mapping and photography.There are also a fleet of attack drones or loitering munitions. The famous Qasef-1 can carry a 30-kg. warhead to strike targets. The Qasef K2, unveiled in January, also can bring explosives to strike a target. The Houthis engineered it to detonate close to targets and spread shrapnel as well. A third drone called the Sammad-2 can supposedly fly 1,300 km. And don’t forget the Sammad-3, a “stealth combat drone” that can fly 1,700 km.The array of Yemeni drones and missiles, including their increasing use against Saudi Arabia shows that the Houthis are able to operate a sophisticated industrial production line for drones, or that they have found a way to easily smuggle them from Iran. It’s not entirely clear how either is possible given their isolation and the fact that the technologies of Saudi Arabia, the UAE and others have been arrayed against them.The Houthi successes are causing celebrations across the Middle East among Iran’s allies. In Lebanon Hezbollah has said the attack on Abqaiq, which the Houthis claimed but which the US blamed on Iran, shows the “military equation” in the region has changed. “The US is on the decline,” says the leader of Iran’s IRGC. “The US and allies have lost hope,” asserts Syrian President Bashar Assad. One almost gets the sense that the recent use of drones and cruise missiles, whether by the Houthis or Iran, has stoked the feeling that Iran and its allies are winning.Since air-defense systems have costs that run into the billions, with a recent price tag in Poland costing $10.5 billion for four Patriot systems, the fact that one of the poorest areas in one of the poorest countries has used drones and cruise missiles to outmaneuver such a system would seem to send a big message.Even under siege, in Yemen, or sanctions, in Iran, the “axis of resistance” is able to defeat Western technology. This may be a bit of bragging, because air defense experts say that properly deployed systems can take down the cruise missiles and drone swarms.
Maybe. So far an Iranian drone swarm and cruise missile attack, of the kind used against Saudi Arabia, whether by Yemenis or by Iran itself or its allies, has not been stopped.