Expert: An Israeli strike on Iranian targets in Iraq 'a major escalation' 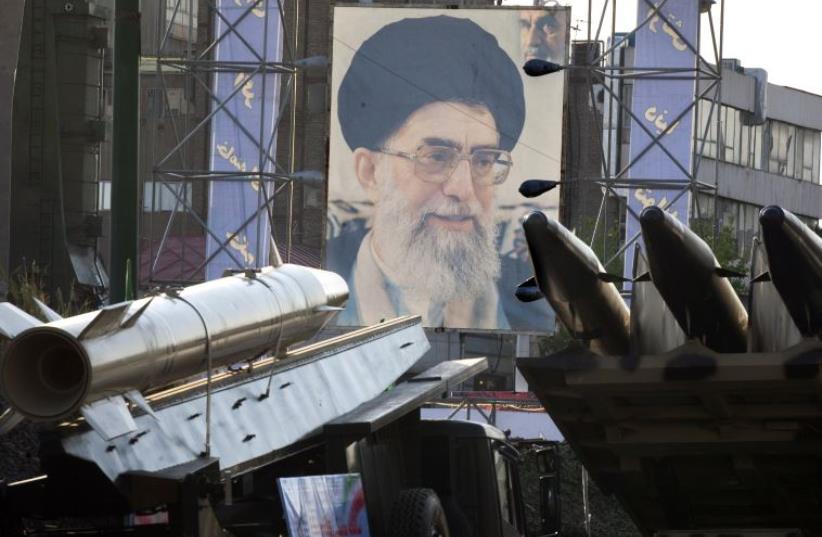 Iranian-made Fateh 110 (Conqueror) (L) and Persian Gulf (R) missiles are seen next to a portrait of Iran's Supreme Leader Ayatollah Ali Khamenei at a war exhibition in Tehran
(photo credit: REUTERS)
Advertisement
A strike by Israel on Iranian ballistic missiles in Iraq would be a major escalation in Iranian-Israeli hostilities, a Middle East expert told The Jerusalem Post on Monday.“Conducting strikes in real mainland Iraq would be a big escalation in Iranian-Israeli hostilities and could very well bring more risks on the Israeli side than we’ve seen before because of the expanded scope,” said Charles Lister, senior fellow and director of the Extremism and Counterterrorism Program at the non-partisan Middle East Institute in Washington, DC.A report by Reuters over the weekend stated that Iran had transferred ballistic missiles to Shi’ite proxies in Iraq over the course of several months and that it is developing the capacity to build more there.The missiles include the Fateh-110, Zolfaqar and Zelzal types, which have ranges of 200-700 km., allowing them to be able to threaten both Saudi Arabia and Israel.While the report was denied by Tehran, Lister told the Post, on the sidelines of the International Institute for Counterterrorism’s annual conference, that “it makes sense” that Iran would make such a move, saying that it was similar to the North Korean model of building a broad range of rockets and missiles to establish deterrence.“The only other thing that would have made sense from a strategic standpoint would be to add Iraq into that equation, particularly given the extent of confidence that the Iranians would have been feeling several months ago about the shape and trajectory of Iraqi politics,” he said.
From nuclear center, Netanyahu warns those threatening to destroy Israel, August 30, 2018 (GPO)
Lister told the Post that Iran has won a strategic victory in Syria despite Israeli operations against them, including the large-scale “House of Cards” operation carried out by the IAF in May, in which jets struck 50 mainly Iranian targets in Syria. That operation sent a “very strong message that the behavior [of Iran] as it was then was totally unacceptable,” Lister said, adding that the psychological affect was greater than any practical damage.Nevertheless, he said Iran hasn’t stopped any of its activities in Syria. But that “doesn’t mean that Iran feels that it is in a massive position of weakness; if anything the fact that it can make that decision is a reflection of the fact that it is actually quite confident with what it has still won in Syria.”“Iranians know already that they’ve won their strategic victory in Syria. While they had a presence and influence in Syria prior to the civil war, Tehran has managed to establish, shape and consolidate a solid parallel security structure in the country,” Lister said. “They have obviously established a much more strategic military position than ever before, notwithstanding just the militias and despite the Israeli operations.”According to Lister, Israel is widely alleged to be behind an air strike on the Syrian-Iraqi border in June near the town of Al-Bukamal which killed 22 members of a Shi’ite militia.“If that’s true, that’s a huge statement of intent,” he said.Israel rarely comments on foreign reports of military activity in Syria, but has publicly admitted to striking more than 100 Hezbollah convoys and other targets in the war-torn country.Prime Minister Benjamin Netanyahu said strikes will continue when “we have information and operational feasibility.”Defense Minister Avigdor Liberman also signaled on Monday that Israel could strike suspected Iranian military assets in Iraq like it has done in neighboring Syria.“We are certainly monitoring everything that is happening in Syria, and regarding Iranian threats we are not limiting ourselves to Syrian territory,” Liberman said. “This also needs to be clear: We will contend with any Iranian threat, and it doesn’t matter from where it comes… Israel’s freedom is total. We retain this freedom of action.”