The park, which opened near the second largest city in Iran, Mashhad, targets boys 8 to 13 years in age and is free to visitors. 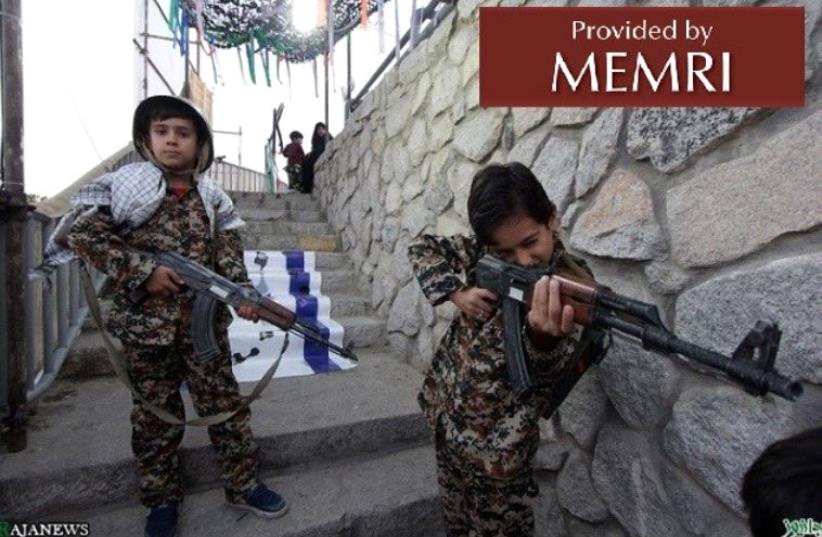 The City Of Games for Revolutionary Children
(photo credit: MEMRI)
A new children's theme park has opened in Iran according to the Middle East Media Research Institute (MEMRI), The City Of Games for Revolutionary Children park, run by the government, features military checkpoints and plastic bullet-equipped AK47s.The park, which opened near the second largest city in Iran, Mashhad, targets boys 8 to 13 years in age and is free to visitors. The children dress in military fatigues and pretend to attack Iran's enemies, shooting plastic bullets at a mock up of Prime Minister Benjamin Netanyahu and at US flags. The City Of Games for Revolutionary Children.(photo credit: MEMRI)Children are meant to learn about the Iran-Iraq war of 1980 to 1988, which Iran refers to as "The Holy Defense." Mock fighting in Syria is also featured at the park, mean to teach visitors about ISIS. In an interview with Iranian Raja News that was translated by MEMRI, Cultural Center Director Hamid Sadeghi stated, "The children follow various paths simulating fighting the enemy, and at some places, the children learn about simple [combat] methods such as firing plastic artillery shells at a simulated enemy as well as aiming and firing a rifle with plastic bullets at [an effigy] of Netanyahu and at US and Israeli flags. Here the guide tells the children a story about some of the operations that were carried out during the eight years of the Holy Defense."The amusement park, which was open in September, saw great demand. According to Sadeghi they considered extending the parks planned schedule, in order to keep up with the demand.