After his release from Israeli prison in 2008, he had a series of sexual affairs – some with women being pressured and intimidated by Kuntar, sources say. 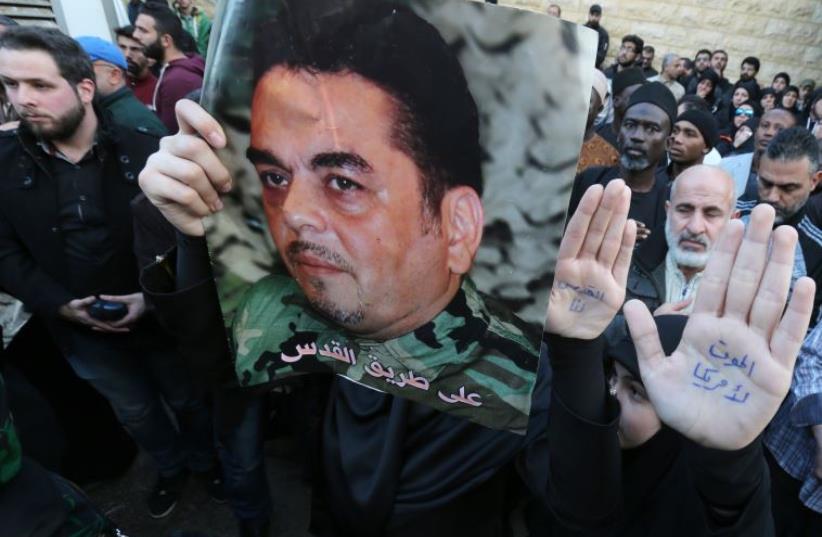 Lebanese mourners hold portraits of Lebanese militant Samir Kantar during his funeral procession
(photo credit: AFP PHOTO)
Advertisement
Some new disturbing facts are emerging about the character of Lebanese terrorist Samir Kuntar who was assassinated in an airstrike attributed to Israel earlier this month.Sources that were were familiar with Kuntar have described him to Lebanese daily newspaper, The Beirut Observer as no less than a “sex monster.” The report, that was later confirmed to The Jerusalem Post by Syrian rebel sources, says that since his release from Israeli prison in 2008, he has has had a series of sexual affairs – some with the women being pressured and intimidated by Kuntar.The website for The Beirut Observer ceased to operate following the publication of the report and sources in Lebanon suspect that a deliberate hacking attack took down the site to prevent the report from being seen.The sources say that when Kuntar visited his “working office” on the outskirts of Damascus, women were brought to him to “release his stress.”' One of the women who was involved with Kuntar was the widow of a terrorist who fought with the arch-terrorist and was killed after a bomb exploded in his car (an action that was also attributed to Israel).Even inside Hezbollah, fighters were surprised to hear the warm words that Hezbollah chief Hassan Nasrallah said after Kuntar's death, and the promises to avenge him. “Is this a way that a ‘hero of the resistance’ behaves?” the sources asked.“He (Kuntar) has damaged the respect of many women,” a source said. “How can he be refereed to as a hero?”The sources added that Kuntar's sexual escapades continued after he was married to his wife.