Netanyahu: Hamas will pay for the murders of the three youths

PM convenes emergency cabinet meeting to determine how to respond to deaths of kidnapped teens, who premier says were murdered in cold blood; Netanyahu says all of Israel is weeping with bereaved families.

Hamas is responsible for the murder of the Naftali Fraenkel, Eyal Yifrah and Gil-Ad Shaer, and Hamas will pay, Prime Minister Binyamin Netanyahu said Monday evening at the start of an emergency security cabinet meeting called to determine how to respond to the murders.
Netanyahu said that the three teens were murdered in cold blood, and that the entire country is weeping with the families.
“We will bury the boys,” Netanyahu said. Then, paraphrasing Haim Nahman Bialik's famous line that “Satan has not yet created vengeance for the blood of a small child,” he added, “nor for the blood of pure teens that were on their way home to see their parents, and who will never see them again.” 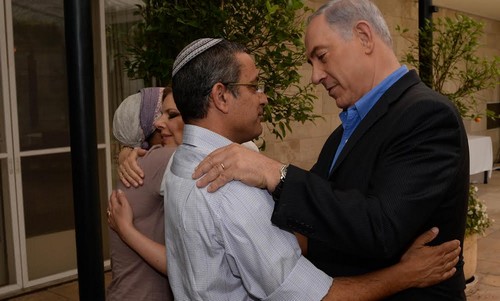 The emergency cabinet meeting was expected to determine what actions to take in light of the murders, with options ranging from an intensive military operation against Hamas – which Israel holds responsible for the murders – to announcements of building in the settlements.
In addition, Netanyahu is widely expected to push for stepping up the campaign to press Palestinian Authority President Mahmoud Abbas to dissolve his unity pact with Hamas.
Foreign Minister Avigdor Liberman who was in Berlin on Monday announced soon after the bodies were found that he would cancel a planned visit to Prague to return to Israel and take part in the security deliberations.
US State Department spokeswoman Jen Psaki said in reaction that “the kidnapping and, of course, any harm that has been done to these teenagers is a tragedy."
Psaki said Washington was urging both Israel and the Palestinians to continue with their security cooperation “ in spite of, obviously, the tragedy and the enormous pain on the ground."
British Prime Minister David Cameron issued an immediate response to the murders, saying he was “deeply saddened by the news.”
“This was an appalling and inexcusable act of terror perpetrated against young teenagers. Britain will stand with Israel as it seeks to bring to justice those responsible,” he said. "Tonight my thoughts and prayers are with the families of Gilad, Naftali and Eyal. No parent should have ever to suffer such heartache or grief."
Advertisement
Subscribe for our daily newsletter