Right From Wrong: Parting words to a disillusioned Zionist

Don't be disillusioned; There is hope. 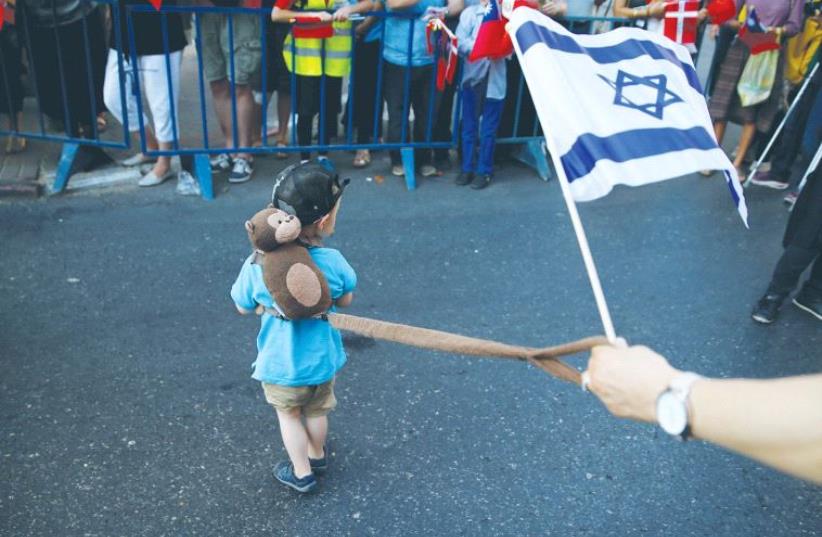 A young boy on a leash while someone holds an Israeli flag
(photo credit: REUTERS)
Advertisement
As the eulogies came to a close at a podium set up next to the freshly dug grave of a widely beloved man – an old friend of my parents who took me into his family when I arrived in Israel nearly 40 years ago – the weather suddenly changed. The crisp, sunny day turned overcast and rain began to fall on the dozens of people paying their last respects to one of country’s pillars of literature. The sky, it seemed, was crying along with the rest of us.But the mourning at the kibbutz cemetery where the funeral took place was not merely expressed in relation to the 90-year-old author, whose physical deterioration had not affected the agility of his mind.For his peers – the salt of the earth of the Jewish state they were instrumental in establishing – the event signaled a tragic end to the Zionist dream.My first encounter with many of these Labor Zionists, a number of whom moved farther to the Left with each passing decade, was in 1977, a few months after Menachem Begin became prime minister. The post- Yom Kippur War period, characterized by national malaise and outrage at the party in power, had ushered in a new and very controversial era.I remember being startled by the fierce reaction to Begin’s victory. I had considered him to be a hero in the battle to rid pre-state Palestine of the British Mandate. But the Israelis I met, both on campus and off, viewed him as a danger to democracy. The woman who would become my mother-in-law, for example, compared him to Mussolini.This rude awakening constituted my initiation- by-fire into Israeli society, which I had previously imagined to be a close-knit community of idealists singing folk songs as they tilled the soil.Ironically, rather than causing me to hightail it back to the United States, the true grit of the place had the opposite effect; it made me fall head-over-heels in love. Indeed, had Israel resembled the land of milk, honey and hora-dancing portrayed at Jewish camp, I wouldn’t have been able to stomach it for more than a few weeks.Having a home to visit on Shabbat, when the Hebrew University dorms emptied out for the weekend, was a godsend. It was also a particular blessing in this case, due to the warmth with which I was received by the brilliant and always witty Hanoch Bartov, whose newspaper columns and books I struggled to read in my determination to learn Hebrew. And though we did not see eye-to-eye on politics, this man – who would go on to win the Israel Prize – was never the least bit condescending. Nor did he ever argue that I was too young or too much of a newcomer to know what I was talking about. It was a generosity of spirit that I never took for granted and will never forget.Aside from an infectious laugh, he also possessed a contagious passion for Israel, repeatedly lauding me for remaining, while expressing sorrow for those who opted out.Over the years, our meetings became less frequent, due to life circumstances. Nevertheless, our love for each other remained intact. What grew apparent when we did get together, however, was that while my own early romantic attraction to Israel had blossomed into a mature and sturdy marriage, his had waned. To be more precise, his view of the country’s leadership, institutions, morals and direction was growing dimmer by the minute. So much so that he recently wrote a piece – which a fellow man of letters quoted at the funeral – announcing his shame at being an Israeli.The collective disgust over the ostensible demise of Israel’s soul has been explained by critics as an angry reaction on the part of the Left to the wresting of its power, first by Begin and subsequently (with a brief interlude) by Benjamin Netanyahu, who last month earned the distinction of being the longest-serving prime minister in the country’s history since David Ben-Gurion.But when those who devoted their youth to defending their homeland against external enemies, while combating an unforgiving climate to make the desert bloom, talk as though their efforts were in vain, something deeper is surfacing. It is not political clout they were robbed of, but rather the impetus for their drive.In other words, their work is done. No wonder they’re depressed.There is nothing more inspiring and invigorating than having a genuinely worthy cause around which to rally. Achieving a goal brings momentary satisfaction; striving for one provides incessant energy.Today, it is the settler movement that is infused with this fuel.In Pirkei Avot – The Ethics of the Fathers – it is written that a rich man is one who is content with his lot. In the Jewish state, this bit of spiritual wisdom has gotten lost in translation. I don’t know whether my friend would concur, but he would giggle – in his unique way – to hear me quote ancient rabbis to admonish him to champion the country he used to adore unconditionally.To those who eulogized him through commiseration, I have this to say: It is true that Israel is not what it used to be. It’s better.

The writer is the managing editor of The Algemeiner.