Exactly a year ago this Sunday, suspected Jewish terrorists firebombed the Dawabsha family’s modest one-story home in the middle of the night. 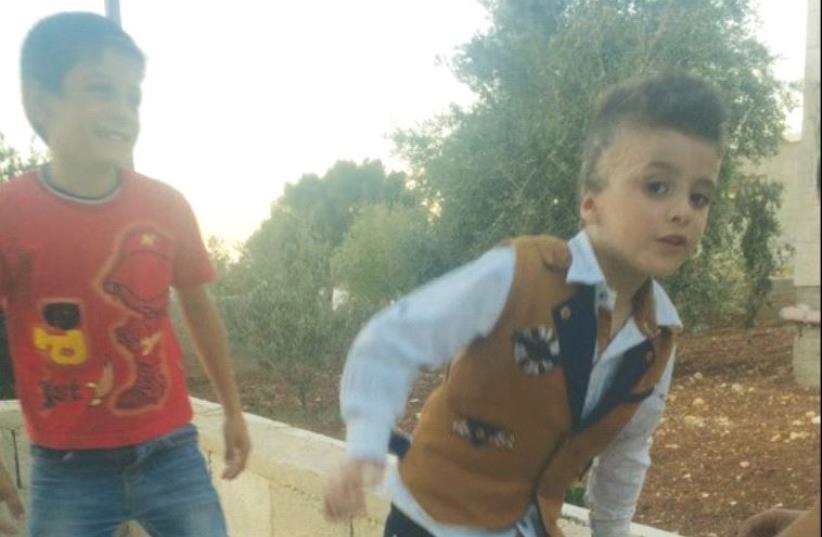 FIREBOMBING SURVIVOR Ahmad Dawabsha plays with his cousins outside their Duma home, July 2016
(photo credit: ADAM RASGON)
Advertisement
“Catch him, catch him, catch him,” yells six-year-old Ahmad Dawabsha, running after a bee with his cousins in his hometown Duma, a Palestinian village southeast of Nablus.He and his cousins slowly approach the bee resting on the ledge of his uncle's and aunt’s porch and smack it with a rag. “Yes, now we have caught eight bees,” he says.Ahmad is all smiles and full of energy. He finally returned to his village last week.Exactly a year ago this Sunday, suspected Jewish terrorists firebombed the Dawabsha family’s modest one-story home in the middle of the night, setting Ahmad, his parents, Saad and Riham, and his brother, 18-month-old Ali, ablaze. Ali died within minutes.Saad, who suffered from 90 percent burns to his body, succumbed to his wounds a week later. And Riham, who suffered from 80 percent burns, died a month after Saad.Ahmad fought for his life in the hospital, spending 25 days in intensive care and undergoing multiple surgeries, skin grafts, and other treatments. His condition gradually improved and the team of doctors responsible for his care discharged him last week.Nasr Dawabsha, Ahmad’s paternal uncle, told The Jerusalem Post in his living room that his nephew has overcome many obstacles, but still has a long road ahead of him.“Ahmad will be returning to the hospital every Monday for laser treatment. He then will undergo a number of beautification surgeries. All in all, the doctors say that Ahmad has another eight years until he will complete his treatment,” he said.Nasr also said that Ahmad still does not fully realize what happened to his parents and brother. “He knows they died and went to heaven, but he does not understand what that means. He thinks that he can travel to Ramallah or Nablus to see his parents and brother sometime soon,” he said. “He asks about them every day and their absence is taking a heavy toll on him.”Nonetheless, Nasr said that he and his family intend to raise Ahmad as a normal child. “We are going to bring up Ahmad as if he were any other child. We believe that it is important that he has the opportunity to experience a regular childhood,” he said.He added that the past week is evidence Ahmad can live a normal life: “He wakes up in the morning, plays with his cousins and friends, rides around in his dad’s car, and chases after chickens.” Nasr also said that Ahmad will start studying at The Martyr Ali Dawabsha School this fall.Hussein, Ahmad’s maternal grandfather, who almost never left his grandson’s bedside, told the Post that the past year caused his family great anxiety. “It has been very difficult. When Ahmad first entered the hospital, he had to undergo surgery every day and even sometimes two times a day. We all nervously waited for his condition to improve, asking our Lord to heal Ahmad,” he remarked.“Praise God, he survived and now has returned home.”Hussein added that the quality of treatment Ahmad received at Sheba Hospital in Tel Hashomer, where he worked as a construction worker 20 years ago, reassured him throughout his grandson’s recovery process. “The doctors and hospital staff provided Ahmad with superb treatment and only wanted for him to be in good health.”He stated further that the hospital gave him special authority to ask for whatever he wants. “If I requested a new bed for Ahmad, a different room, or specific doctors and nurses, my request was always fulfilled,” he said.Nasr said a number of other groups besides the medical staff have helped the family make it through the past year.For example, he mentioned that the Israeli NGO The Road to Recovery helped his family with transportation. “They gave us rides from the checkpoint to the hospital,” he said.He also mentioned that the Palestinian Authority has provided generous support to his family. “President Mahmoud Abbas’s door is always open.We can talk to him at any time and he said he will give us whatever we need.” In addition, he revealed that the PA is footing a $1.5 million bill for a new home for Ahmad and a memorial museum in Duma.Moreover, the Dawabsha family is still in the process of a legal battle in Israel.The family overwhelmingly believes that the court will not ultimately deliver justice and hold the perpetrators accountable. Speaking of the ongoing trial, Hussein said, “The perpetrators need to be held accountable. But I don’t think that will happen in this country,” he said.Despite not expecting justice, he said that his family will continue to attend hearings to prove that the Dawabsha family is still standing.“We want to make clear that we are still here and exist,” he remarked. The last hearing took place Thursday in Lod.Israel has charged 21-yearold Amiram Ben-Uliel with murder and an unnamed suspect as an accomplice in the attack.The Dawabsha family hopes to move forward, but feels that it will never be able to overcome the loss of Riham, Saad, and Ali. Just as the sun set over Duma, Hussein remarked, “My daughter, sonin- law, and grandson will never be returned to us. We’re broken from the inside.“But we need to be strong on the outside so Ahmad can grow to be strong, successful, and continue his family’s lineage.”