King Abdullah did not visit Ramallah since 2012, why did he come now? 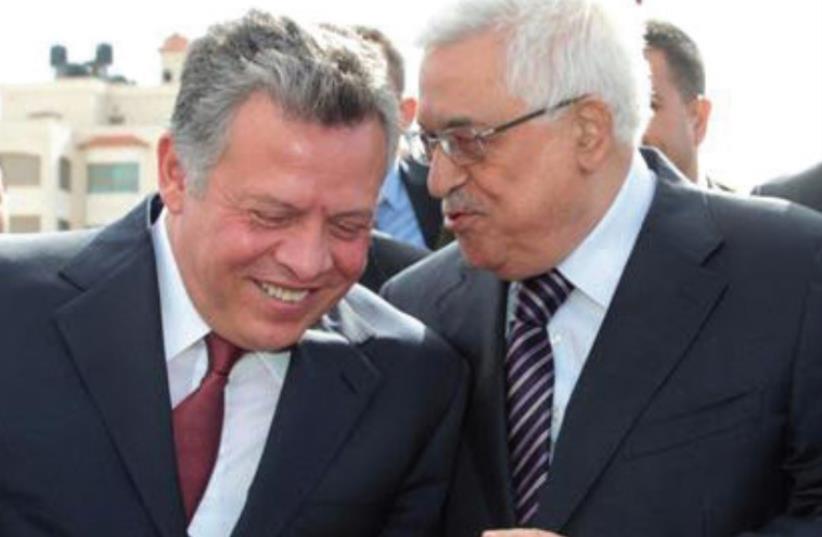 Mahmoud Abbas (right) to King Abdullah: We are one nation in two states
(photo credit: REUTERS)
Advertisement
By making a quick but rare trip to Ramallah on Monday, Jordan’s King Abdullah II sent a message to several different audiences at the same time, former ambassador to Egypt Yitzhak Levanon said.Prior to serving as ambassador to Egypt from 2009-2011, Levanon dealt for years with Arab-world issues in various capacities inside the Foreign Ministry. Those varied audiences, he said, included Israel, the king’s domestic constituency in Jordan, the Palestinian Authority and Hamas.Levanon pointed out that Abdullah is not a frequent visitor to Israel or the PA. This was the king’s first visit to Ramallah since 2012 and only his sixth in 17 years. He has visited Israel just twice during that same period; the first time in April 2000 and the second was a secret visit to then-prime minister Ariel Sharon’s farm in 2004.Since Abdullah’s visits to the area are quite rare, that he went to Ramallah and not to Israel was a demonstrative act showing Jerusalem that, following the Temple Mount crisis and the incident at the Israeli Embassy in Jordan, it is “not the right time to come to Israel,” Levanon said.He likened the snub of Israel to someone who gets two dinner invitations but accepts only one, leaving the other party intentionally insulted.“It is not as if he comes here every other day so that if he doesn’t come once when he is in the neighborhood it’s no big deal,” Levanon said. “It is a big deal. He is saying: ‘I am going to Abu Mazen [PA President Mahmoud Abbas] and that is all.’” The visit, Levanon said, is obviously connected to last month’s tension on the Temple Mount.“Otherwise, there is no reason for him to go to Ramallah now,” he said. The message is that he supports the Palestinian Authority, supports Abu Mazen and supports the decisions that he made during the crisis.”That message was important for him to send to the Palestinians, as well as to his own people, many of whom were angered by his decision to release to Israel the embassy security guard who was attacked with a screwdriver and killed both the assailant and another person at the scene.According to Levanon, there was also a clear message to Hamas that in its battle with Fatah and the PA, Abdullah stands squarely on the side of the PA.“The king went to Ramallah at a time when he knows the Egyptians are in contact with [Abbas’s chief rival, Mohammad] Dahlan, while Abu Mazen is taking steps to stop the supply of electricity to Gaza, as well as the payment of salaries there,” he said.This clear picking of a side in the bitter Hamas-Fatah rivalry is also a message to Abdullah’s domestic audience, which is not entirely on the side of the PA, Levanon added.Another message sent by the two-hour trip to Ramallah, according to Levanon, was to shore up the whole arrangement on the Temple Mount, whereby the Jordanians have overall responsibility for the site as its custodians, as spelled out in the peace agreement with Israel, but daily administration of the site is in the hands of the Wakf Muslim religious trust, whose members are appointed and paid by the PA.Abdullah, Levanon said, wanted to make sure it was clear that, despite the events of the last month, the situation has not changed. While this arrangement is accepted by Abbas and the PA, he said, Hamas is far less enamored of it and would like to see the Palestinians in control of the site without any Jordanian involvement.Levanon also said that Abdullah’s visit was important in bringing Abbas back into the picture regarding the Temple Mount. Abu Mazen, he contended, was largely sidelined during the crisis.“Nobody turned to him,” he said, adding that the main players were Israel, Jordan, the Americans, Egypt, the Saudis and – to a certain extent– Turkey.“By going to Ramallah,” Levanon said, “Abdullah was bringing Abu Mazen back into the game.”According to Levanon, Abdullah’s visit was akin to a “big brother” giving support to a younger sibling. “It is a pat on the back,” he said. “The king is saying, ‘My brother, I am with you here; don’t worry.’ This was meant to encourage Abbas, to show him that Jordan is with him.”