After 3 years of Gaza quiet, a boom of southern life 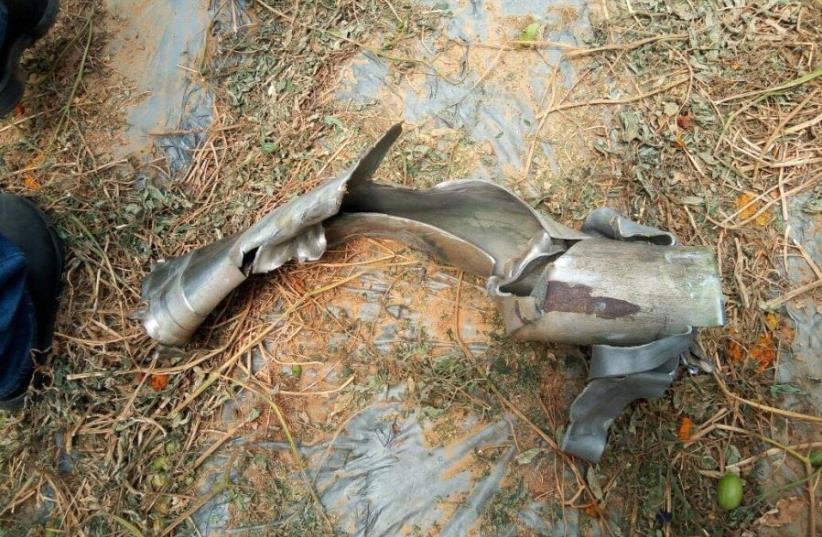 Remnants from a rocket that struck southern Israel, April 10, 2017
(photo credit: POLICE SPOKESPERSON'S UNIT)
Advertisement
While the border with the Gaza Strip is Israel’s most explosive, three years of quiet has led to a surge of growth in Israeli communities bordering the Hamas-run Strip, a senior IDF officer told The Jerusalem Post.“People here feel more secure and they are building in the kibbutzim and neighboring communities,” Lt.-Col. Ariyeh Berger said, adding that there has also been an increase in tourism.In the nearby town of Sderot, which sits just a few kilometers from the border and which has been pounded by thousands of Hamas rockets over the years, construction has increased tremendously with high-rise buildings on the outskirts of the town and a new mall at one of the entrances to the town.“There is a lot of life here. In my eyes, that’s the most incredible thing I have seen,” Berger, who served on the northern part of the Gazan border stated.The coordination and cooperation between military forces in the area and the local regional councils is at the highest possible level, with all relevant figures involved on an almost daily basis.And while the prolonged period of quiet since Operation Protective Edge in 2014 has brought new life to border communities, every once in a while the calm is shattered by a rocket launched by Salafi jihadist groups, reminding the IDF of the ever-present threat on the other side of the fence.Several rockets have struck southern Israel in recent months and while most of them have been claimed by small jihadist groups, many times as a means for pressuring Hamas by raising tensions between the terrorist organization and Israel, Israel holds Hamas responsible for all fire coming from the Strip.Company Commander Capt. Guy Dahan told the Post that following a rocket launch toward the Eshkol regional council last month “we were able to pinpoint the target” and he fired on a Hamas position with his tank.Due to intelligence gathered on the target prior to the retaliation, “it was all over quickly,” he said.While the group has rebuilt its missile stockpile with locally produced weapons, the group has also invested in their own intelligence gathering capabilities, building outposts every dozen meters along the border with Israel and patrolling the border. While the outposts may allow Hamas to collect intelligence on the IDF, Dahan told the Post that the outposts have made it easier for him and his fellow soldiers to see their enemy.According to Berger, Hamas, which quickly arrests those responsible for firing rockets towards Israel, has been deterred and is not looking to get into another conflict with Israel. Nonetheless the IDF continues to build its capabilities and maintains the preparedness of troops.Berger told the Post that troops under his command have at least two drills per week “to make sure that if the situation suddenly changes we know how to properly react and get the situation under control as fast as possible.”In December, hundreds of IDF soldiers participated in a large-scale 11-hour drill in border communities as well as in large southern cities such as Ashkelon, Netivot and Ofakim in preparation for another possible war with Hamas and terrorist attacks emanating from the coastal enclave, including sudden, surprising terrorist infiltrations through terror tunnels into populated Israeli territory in the south of the country.During the 2014 war, several soldiers were killed by Hamas gunmen when they popped out of the numerous tunnels dug into Israel by the terrorist group, surprising the IDF and leaving the residents of border communities concerned of possible tunnels beneath their homes. By the time of the last cease-fire, the IDF said it had destroyed 32 tunnels that crossed under the border.According to Berger the army has not heard from any civilian reporting hearing any sounds of digging, but nonetheless the army is “spending a significant amount of energy and time on increasing our ability to protect our citizens.”The construction of Israel’s underground barrier, which has become incredibly symbolic to both sides, has led some officials to voice their concern that it may push Hamas to attack Israel.Construction of the barrier is expected to cost over NIS 3 billion and be completed within two years. Despite the fact that the barrier is being built entirely in Israeli territory, OC Southern Command Maj.-Gen. Eyal Zamir recently stated it can potentially lead to a dangerous escalation.But while above ground it may be quiet, both Hamas and the IDF are preparing for a war which could break out at any moment.“We know Hamas, we have been dealing with them for years,” Dahan said.