Ambassador: Denying Israel's ties to Temple Mount is like denying Sweden's to IKEA

"Any attempt to deny these ties is simply an evasion of science," writes Israeli envoy to Sweden. 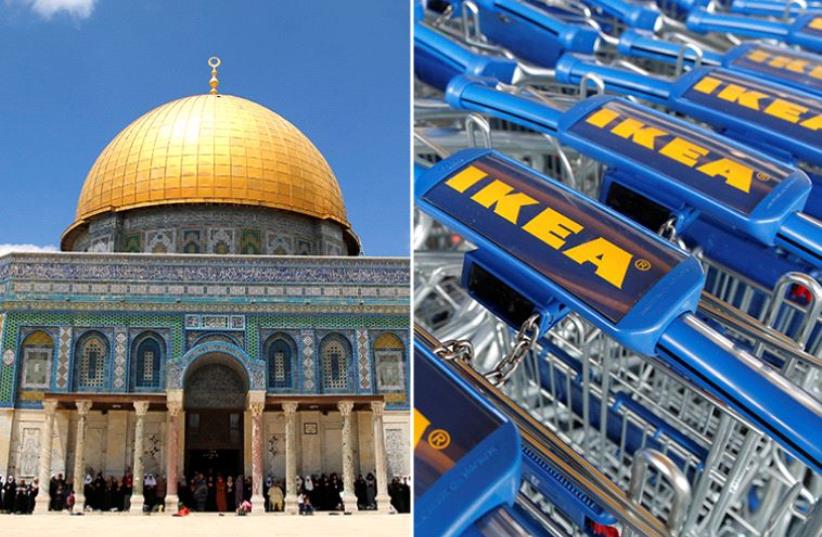 Temple Mount and IKEA
(photo credit: REUTERS)
Advertisement
Ambassador to Sweden Isaac Bachman called on Stockholm to oppose future UNESCO Jerusalem resolutions that ignore Jewish ties to its holiest site, the Temple Mount.“To say that Israel has no connection to the Temple Mount is like saying that Sweden has no connection to IKEA or that France has no connection to the Eiffel Tower,” Bachman said.The Israel envoy invoked the Swedish-founded furniture giant and the iconic Parisian landmark in an op-ed published Monday in the Scandinavian country’s Göteborgs-Posten newspaper.
Israel’s Ambassador to Sweden Isaac BachmanLast April, Sweden voted in favor of a Jerusalem resolution that was approved by UNESCO’s 58-member Executive Board, but then abstained when the board passed on a similar text last month.Bachman told The Jerusalem Post on Tuesday that he took no comfort in Sweden’s decision to withdraw its support from the resolution because such texts can only be defeated if UNESCO member states actually oppose them, instead of abstaining.“I do not look at the abstention as an achievement. This is a failure. Sweden should do some soul searching,” he said.Countries need to take a moral stand here and set the record straight, Bachman said.This is particularly true for Sweden, which talks often about equality and human rights, he added.
A change for Israel at the United Nations?
Bachman – who has headed the mission in Sweden since 2012 – penned the op-ed as part of his continuing efforts to sway Sweden to change its position on texts that refers to the Temple Mount solely as “Al-Haram Al-Sharif.”“One must wonder how it is possible for Sweden and the other European countries that abstained, to have no opinion on such a delusional resolution that ignores thousands of years of Jewish history,” Bachman wrote.He mentioned that there were five European countries that voted against the Executive Board resolution: Great Britain, Germany, the Netherlands, Lithuania and Estonia. The United States also opposed the resolution and Italy has promised to do so in the future.Stockholm’s absence from that list, Bachman said, “is yet another example of Sweden’s one-sided policy when it comes to the Palestinian-Israeli conflict.“Sweden’s moral voice is often used to preach to Israel about human rights,” he said, “but the same moral voice is never used to criticize the Palestinians or come with demands to the Palestinians."“Not even when the Palestinians are engaging in a campaign to change verifiable historical facts can Sweden bring itself to oppose them,” Bachman wrote.“The Swedish conduct with regard to this UNESCO resolution is one of the most extreme example of this one-sidedness.”These resolutions, the latest of which was approved by a 21-member World Heritage Committee last week, is part of a Palestinian campaign to deny the fact that “the Jewish people are the indigenous people to the Land of Israel that have maintained a continuous presence there for the past 3,000 years,” he wrote.Attempts by UNESCO boards to “deny these ties is simply an erosion of science” and a promotion of “anti-science propaganda,” Bachman said.It’s sad that UNESCO, which is suppose to protect the world’s historical heritage, “has become so politicized that even Western democracies like Sweden are driven by political interests instead principles or historical facts.”That these resolutions continue to be voted on even though UNESCO Director-General Irina Bokova and UN Secretary General Ban Ki-moon have condemned them, “further illustrating how international organizations have been hijacked by an extremist agenda,” he said.“No one with intellectual honesty seriously doubts that the Jewish people have historical, cultural and religious ties to the Land of Israel. Any attempt to deny these ties is simply an erosion of science. That UNESCO is promoting anti-science propaganda is yet another tragic example of the shameful state of UN institutions,” Bachman wrote.Separately after the vote in October Aron Verständig, who chairs the Jewish Central Council of Sweden, wrote a letter of protest to Foreign Minister Margot Wallström.“The Jewish Central Council would like to see a clarification on the part of the Swedish government as to how the government views the message conveyed by this resolution. The Jewish Central Council expects that Sweden will make a stand against similar attempt at history revisionism,” he wrote.