Analysis: How Israel fell into a trap in the Gaza Strip

Tuesday's rocket fire into Israel was a local decision made by a junior Islamic Jihad commander, but with the rehabilitation of Gaza stagnating, any small incident can ignite the situation. 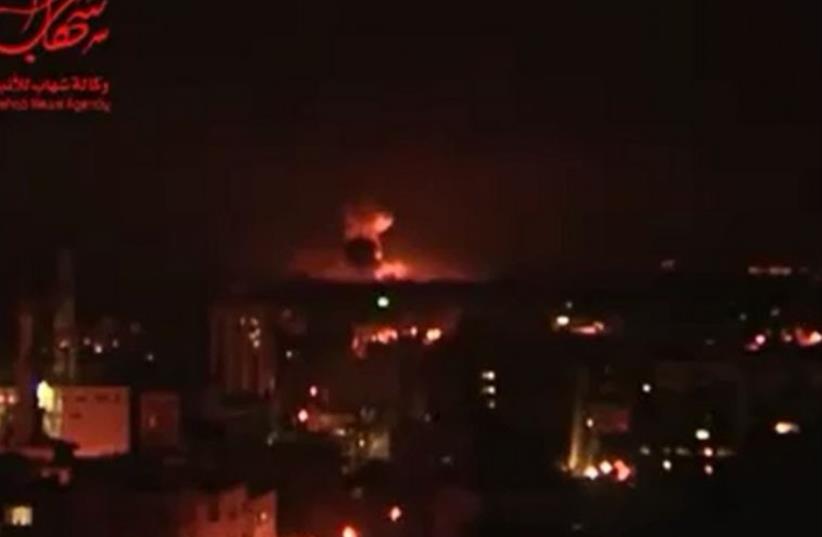 Explosions in Gaza following IDF attack
(photo credit: PALESTINIAN MEDIA)
Advertisement
The firing of a rocket into Israel from Gaza on Tuesday reminded us all of the degree to which Israel's situation is fragile and explosive. The alarm and warning systems were triggered, rumors were spread, on social media reports arose of rockets being launched and television stations began live news broadcasts. An atmosphere of an emergency situation could be felt. Ministers and MKs responded, with Culture and Sport Minister Miri Regev calling for retaliation against Hamas. Quickly, the picture became clearer - one rocket was launched, falling in Gan Yavne.The defense leadership - Prime Minister Benjamin Netanyahu and Defense Minister Moshe Ya'alon - held consultations and the IDF gathered intel and investigated the incident. A picture of the situation was put together. The rocket was the whimsy of a rebellious Islamic Jihad faction that was displeased with the appointment of a local commander. The members of the faction decided to respond by firing on Israel.Israel, almost unavoidably, decided to retaliate as was expected - but not to escalate the situation. Early Wednesday morning, IAF planes attacked four Islamic Jihad and Hamas targets. The defense minister put out a statement warning that he sees Hamas as the responsible party for every attack from Gaza. On Wednesday, it was reported that Hamas arrested those involved in the firing of the rocket.The messages were sent and understood. Both sides - in fact everyone involved, including Islamic Jihad - are not interested in an escalation and deterioration of the situation. The quiet in the South will continue until the next whimsy, but the main problem has not yet been solved. Nine months after the third Gaza war in summer 2014, the Gaza Strip has not begun its rehabilitation process at all. The materials transferred there from Israel- food, fuel, medicine and building materials - are merely means of resuscitation. There is a real need to come to a long-term agreement, but the chances of that happening are slim.The Palestinian Authority, which was supposed to play a role in Gaza, does not want to, or is unable to do so. Israel, which has a supreme interest in helping the rehabilitation and stabilization of Gaza, finds itself in a trap. If Israel tries to promote a long-term agreement, which is in its interest, Jerusalem is likely to face opposition from Egypt, which sees Hamas as an enemy, and therefore the Gaza trap will continue. The chances of a deal are scant and any minor incident could potentially swell out of proportion.Yossi Melman is an Israeli journalist and writer who specializes in security and intelligence affairs.  He is co-author of Spies Against Armageddon: Inside Israel's Secret Wars. Visit Yossi Melman's blog: www.israelspy.com