Analysis: Is demolishing Palestinian terrorists' homes, but not Jewish ones discrimination?

As long as there is even a small amount of Jewish terror, the issue will not go away from the public sphere and will continue to sharpen the criticism of Israel’s house demolition policy. 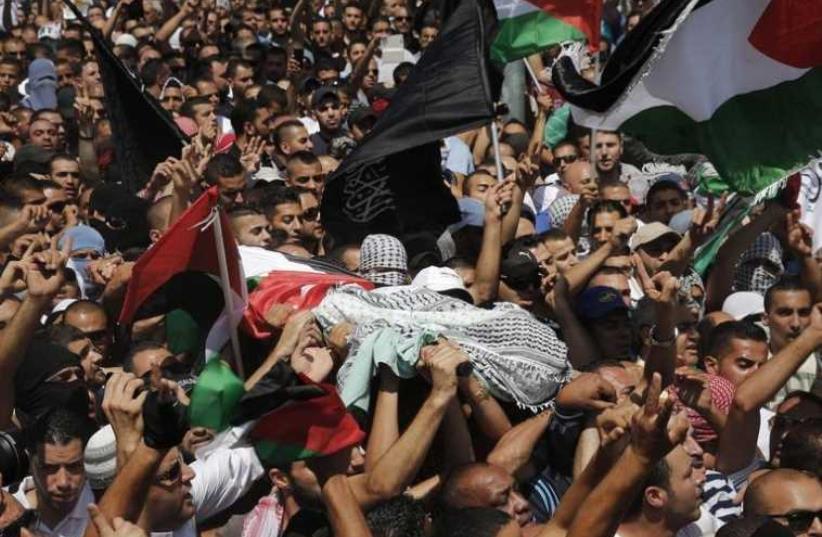 Palestinians carry the body of 16-year-old Muhammad Abu Khdeir during his funeral in Shuafat
(photo credit: REUTERS)
Advertisement
If there was ever a Jewish terrorist who the Israeli side might agree “deserved” to have his house demolished, it would be Yosef Haim Ben David, who brutally murdered and burned to death 16-year-old Palestinian teen Muhammad Abu Khdeir on July 2, 2014.Yet with Israel refusing to demolish Ben David’s house while demolishing the houses of many Palestinian terrorists, the Abu Khdeir family has petitioned the High Court of Justice to declare the different treatment of Jewish and Palestinian terrorists to be discrimination.Is it? How will the High Court likely rule?The argument for discrimination is quite simple. If Palestinian terrorists’ homes are being demolished, so should Jewish terrorists' homes. Anything else is discrimination.MK Ahmed Tibi (Joint List) made this argument back in April, responding to Ben David’s conviction for murder at a press conference. He said that even as the court “had reached the correct decision,” he attacked the absence of a government process or even discussion about demolishing Ben David’s house.The Jerusalem Post asked Tibi if a formal request to the government for a demolition had been filed, as state prosecutor Uri Korb told the Post in the past would need to be done since house demolitions are not authorized by the prosecution.He responded, "Has any lawyer in the past proposed to destroy a Palestinian house? It was an initiative from the prime minister, by the internal security minister and by the authorities; I think that they know this option."Eventually, the Abu Khdeir family requested that the government demolish Ben David’s house, and when the state refused, they petitioned the High Court.The government defended its decision not to demolish Ben David’s house in a written submission Saturday, with the timing of the filing potentially indicating that the state wishes to keep attention away from the sensitive issue.Quoting a prior High court decision which indirectly addressed the issue and said that the amount of Jewish terror is far less than the amount of Palestinian terror, the state tried to convince the court to agree with its prior pronouncement.The state said that in 2015 there were only 16 Jewish terror incidents and only two so far in 2016 (terror incidents including incidents beyond murders), far less than from the Palestinian side.It argued that the reason that there are house demolitions of Palestinians is not for punishment, but for deterring Palestinians from future terror attacks, and that ongoing criminal proceedings against Jewish terrorists are sufficient deterrence when facing a much smaller threat.Kohelet International Law Department Director and Northwestern University Professor Eugene Kontorovich said that the petition is problematic.He said that “only in Israel can a family go to court to make the government” take actions like house demolitions.Beyond that narrower point, he said that the discrimination argument is misplaced.He argued there is no ability currently to know if there is discrimination because the volume of Palestinian terrorists is so much higher than Jewish terrorists and the only way to decide the issue would be if the numbers were more comparable in the first place.Kontorovich pointed out that most Palestinian terrorists' homes still are not demolished and that, even with the increase in demolitions in recent years, the relative percentage of terrorists' homes which are demolished is still small.He said the fact that the state has demolished zero out of two Jewish terrorists’ homes proves nothing.The scholar said that part of the confusion is that people misunderstand the essence of what he says makes house demolitions legal.He said that if house demolitions were for collective punishment, they would be illegal as much of the world claims, but that their deterrence purpose is what makes them legal and is what differentiates the Palestinian and Jewish cases.He compared the situation too the US seizing 500 houses per year in Philadelphia for law enforcement purposes, including “Grandma’s house” where her “grandson is dealing drugs out of the basement without her knowledge.”Again, Kontorovich said critics think the hypothetical grandma is being unfairly punished for her grandson’s drug-dealing, the same as many Palestinians argue against hurting their families for the sins of one family member, but that this is just an indirect impact of administrative measures to reduce crime and terror.  Justice Minister Ayelet Shaked told Israel Radio in December 2015 that “if there will be more terror attacks by Jews, we will also do house demolitions of Jews,” appearing to coincide with Kontorovich’s argument that the difference in policy is volume-related and not ideological.The Jerusalem Post attempted to get responses to the state’s and Kontorovich’s arguments from Mohanad Jabarah, the Abu Khdeir family’s lawyer, and from multiple NGOs, but they did not respond or declined to by press time.One difficulty of the issue is that even as some Palestinian and human rights critics of Israel argue that the house demolition policy discriminates against Palestinians, most would highly prefer that there were no house demolitions at all, making it complicated for them to argue for more demolitions, even against Jewish terrorists.The High Court is likely to dismiss the petition as it tends to defer to the state on issues of national security and deterrence.But one thing is certain, as long as there is even a small amount of Jewish terror, the issue will not go away from the public sphere and will continue to sharpen the criticism of Israel’s house demolition policy.Whether there is discrimination or not in the legal sense, the government will likely carefully weigh this over time in deciding which Palestinian houses to demolish and whether at some point to start demolishing Jewish homes.