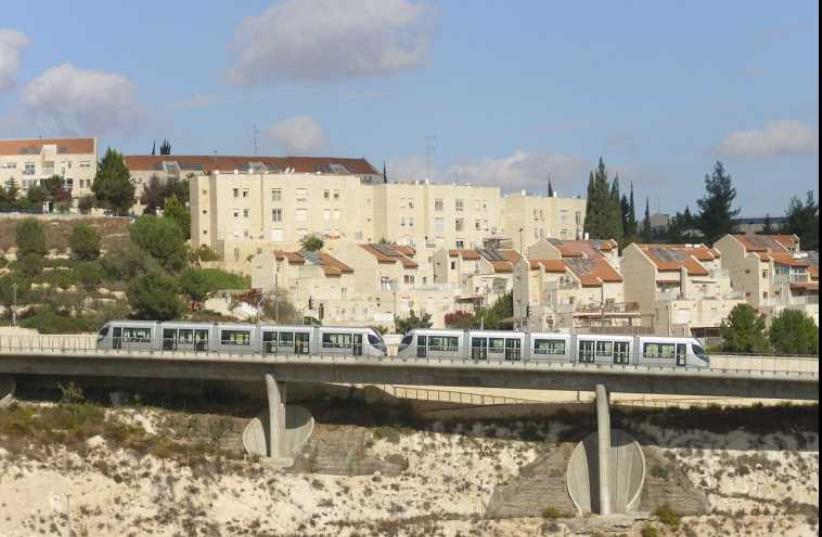 Pisgat Ze'ev
(photo credit: Wikimedia Commons)
Advertisement
A mob of masked Arab youths besieged a busload of mourners attending a memorial service for a revered rabbi, and wounded a Border Police officer, during multiple rock attacks near the Mount of Olives Cemetery in Jerusalem Wednesday night.According to police, the bus – carrying passengers en route to the memorial for Rabbi David Cohen (popularly known as the Nazir, or the Nazarite), a preeminent philosopher and Talmud scholar who died in 1972 – was passing through the Palestinian neighborhood of E-Tur when dozens of rocks were hurled at it.While several of the bus’s windows were shattered in the attack, none of the passengers were wounded, police said. Minutes later, a Border Police officer stationed at the cemetery sustained a light head wound after being struck by a rock in another attack.Border Police officers responded to both incidents immediately and dispersed the assailants with stun grenades. No arrests were made, police said.Just four days earlier, MKs and ministers demanded greater security on the Mount of Olives during a Sunday Knesset Interior Committee visit to the site, following repeated cases of grave-site vandalism and violence against Jewish visitors.Construction Minister Yoav Galant (Kulanu) said the trip was intended to ensure that Israel’s sovereignty over the site is being protected, and called on Defense Minister Moshe Ya’alon and Public Security Minister Gilad Erdan to form a united command.During the trip, MK Bezalel Smotrich (Bayit Yehudi) said attacks on the Mount of Olives are so commonplace that he will only travel in a car equipped with reinforced windows to visit his two sisters who live in the area.“The feeling is that [police] got a budget and manpower and there’s still no response,” he stated.While police said they intend to install 160 more security cameras over the next four years and have increased supervision in the area, most of the attacks are carried out by minors, who are released to the custody of their parents.Indeed, this year 17 criminal cases were opened due to the ongoing violence, resulting in 11 arrests, but all the suspects were released because they were minors.Still, Jerusalem Affairs Minister Ze’ev Elkin (Likud) said the ministry has invested NIS 90 million in security for the cemetery, via the Jerusalem Development Authority, and plans to continue to invest in developing the Mount of Olives to attract more visitors to the site.The 3,000-year-old cemetery – where four prophets, former prime minister Menachem Begin, Hebrew revivalist Eliezer Ben-Yehuda and leaders of revered rabbinical dynasties are buried – contains between 150,000 and 200,000 graves, and is only accessible by driving through Palestinian neighborhoods.The majority of the attacks have taken place on the congested main roads leading to the site by Palestinian students from a nearby high school and middle school who throw rocks at Jewish drivers and deface grave-sites.The violence has been so pronounced over the years, that many visitors have been forced to retain security escorts provided by the Construction Ministry, who will guard them for no more than 40 minutes.Meanwhile, on Thursday morning two Jewish minors were arrested in the Pisgat Ze’ev neighborhood for allegedly participating in a mob attack with four other Jewish youths against an Arab contractor who was repairing a traffic light in the area.According to police, the 31-year-old Arab worker filed a complaint stating that the youths approached him at approximately 2 p.m. on Wednesday and proceeded to repeatedly strike him in the head after an argument ensued.The unidentified man told police he was hospitalized for light wounds following the attack.After an intensive search, two suspects were arrested and arraigned at the Jerusalem Magistrate’s Court.Police said the investigation is continuing and more arrests are expected in the coming days.Lahav Harkov contributed to this report.