In a separate incident, a Palestinian girl with a knife is stopped approaching West Bank settlement of Carmei Tsur. 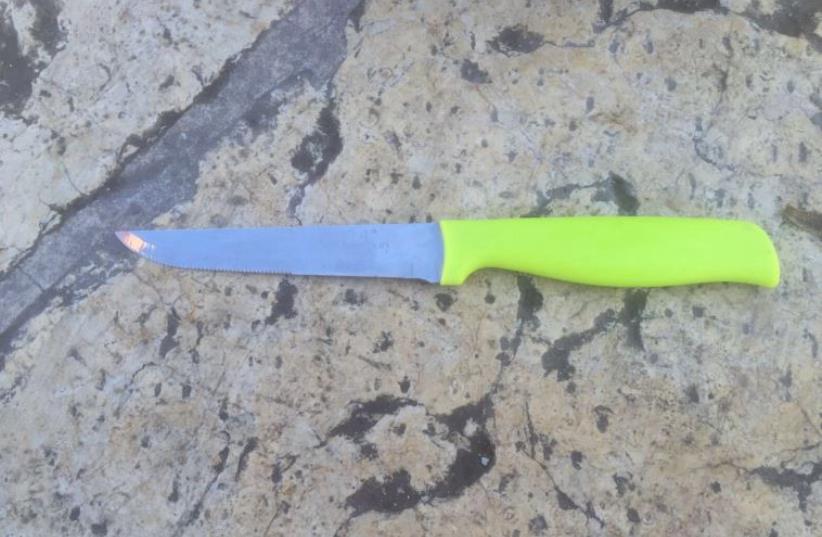 Scene of attempted stabbing attack in Jerusalem's Damascus Gate
(photo credit: ISRAEL POLICE)
Advertisement
A stabbing attack was thwarted near Damascus Gate in Jerusalem's Old City on Tuesday morning, near the site of a terror attack last week that claimed the life of Border Police officer Hadar Cohen.According to police, in Tuesday's incident, a Border Police unit saw a woman who aroused their suspicions near Damascus Gate and approached the suspect. During the inspection, when the woman was asked to hand over her bag, she pulled out a knife and attempted to stab the officers.The officers responded quickly, and succeeded in gaining control of the suspect. Police described her as a 16-year-old Arab Jerusalem resident.There were no injuries in the incident.In a separate incident on Tuesday morning, a 13-year old Palestinian girl with a knife was stopped as she walked toward the gate of the West Bank settlement of Karmei Tzur in Gush Etzion. She was holding a number of school books in her hand.The security guard asked her to stop and lie down on the ground, because Palestinian school girls do not usually enter the settlement, particularly in the morning, according to a Gush Etzion Council spokesman. When she did so, she dropped the school books which had hidden the knife she also had in her hand. It too, fell to the pavement, the spokesman said..The guard held her until security forces arrived. Those security forces have arrested her and are questioning her.Gush Etzion Regional Council head, Davidi Perl said that "thanks to the awareness of the residents and the professionalism of the security forces a tragedy was prevented this morning."Perl blamed Palestinian incitement for the incident and called on Israel to take offensive action.“When a girl leaves her home to stab Jews rather than head to school, that can only be the result of wild incitement rampant for years in the Palestinian Authority. We once again call on the government of Israel to act responsibly by going on the offensive rather than rely on defensive responses," Perl said.On Friday night Palestinian vandals set fire to prayer books in a small synagogue in the Givat Sorek outpost, located just outside the boundaries of Karmei Tzur.