The telltale signs are: First, the perpetrating terrorist’s profile, Second, each terrorist attack spurs imitation on the Palestinian side. 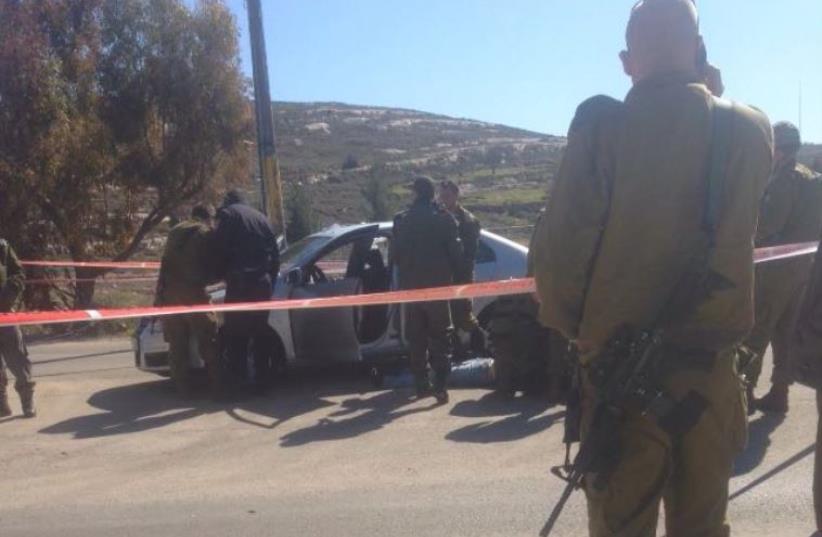 Scene of shooting attack near Beit El
(photo credit: BEIT EL SECURITY/RAFI ALUSH)
Advertisement
The terrorist attack on Sunday in Beit El seems to mark the beginning of the next armed intifada we have so far sought to avoid.The telltale signs are: First, the perpetrating terrorist’s profile – he was a member of the Palestinian [Authority] security forces, aged 29 and married with children. This profile is not the same as that of the youth assailants that have been prevalent so far. Second, each terrorist attack spurs imitation on the Palestinian side, which could lead to further attempts by members of Palestinian security forces to turn their weapons against Israeli citizens.Despite the stabbing, shooting and vehicular ramming attacks that characterize the current wave of terrorism, the proper operation of security officials and security coordination between the Palestinians and the IDF has allowed both sides to maintain a reasonable routine. Palestinian workers have retained permission to work in Israel and Israeli citizens maintain their day-to-day routines.Terrorist shooting attacks that increase the number of casualties on both sides are likely to lead to a downward spiral that will require drastic security measures. This will catalyze an immediate loss of confidence and undermine the level of security coordination, which will have a damaging impact on the daily routine.Similarly, in the second intifada, there was a rapid deterioration from the moment security personnel turned their weapons against Israeli targets.Neither side has interest in escalating the situation to the point of loss of control. [Palestinian Authority President Mahmoud Abbas] “Abu Mazen” has aimed to return the Palestinian issue to center stage by means of an uprising.Meanwhile, the Israeli side seeks to maintain the status quo and is not interested in demonstrating surrender in the face of terrorism.A strong country, Israel has proven to the world that is does not capitulate to terrorism. We must continue to fight against terrorism with determination. Simultaneously, before control is lost and we descend into an armed intifada with unforeseeable results, it is necessary for leaders on both sides to maintain composure.The launching of a diplomatic process aimed at shifting gears may work to prevent the deteriorative conditions that nobody desires. A summit meeting between Prime Minister Benjamin Netanyahu and Abbas seems a worthy starting point for such a process.Eliezer Marom is a former commander of the Israel Navy. This article originally appeared in ‘The Jerusalem Post’s sister publication ‘Maariv Hashavua.