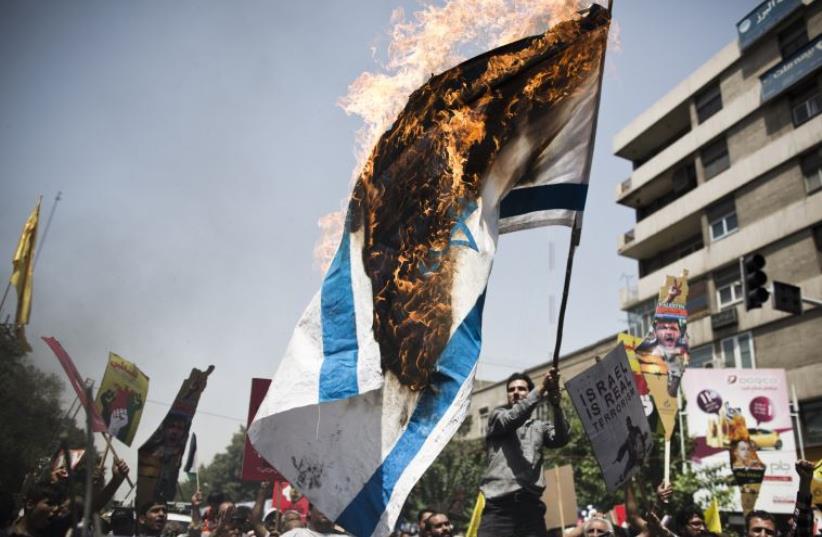 Iranian protestors burn an Israeli flag during a demonstration in Tehran on July 25, 2014 to mark the Quds Day
(photo credit: BEHROUZ MEHRI /AFP)
Advertisement
The Iran deal has not altered the potential threats posed by Shi’ite terrorist groups to Israelis abroad, the head of the National Security Council’s Counter- Terrorism Bureau said Monday.At a briefing with reporters ahead of the upcoming High Holy Days – one of the busiest times of the year for Israeli vacationers – bureau chief Eitan Ben-David said that “the Shi’ite terrorist campaign continues and we can’t say that, because of any deal signed with Iran, that the threat has diminished.”He added that Iran’s capabilities as a terrorist state to fund and execute attacks against Israeli and Jewish targets aboard has not changed since the deal was signed last month.Ben-David said the list of travel warnings has not changed since last year, even with a series of geo-political changes in the region and beyond.As of today, out of 193 countries in the world, Israeli authorities have posted a travel warning for 27, as well as six enemy states – Syria, Iraq (including Kurdistan), Iran, Lebanon, Yemen and Saudi Arabia – where Israeli citizens are banned from visiting. There are also eight separate warnings on specific regions of countries, such as Kashmir in India or Chechnya in Russia, where Israelis are advised to not visit and/or to leave immediately, even though the entire country is not under warning.According to the bureau, one of the main threats is plots against Israeli and Jewish targets in northern and Western Europe by ISIS operatives who have returned from fighting in Iraq and Syria. That said, they see Israel as a sort of “secondary target” for these potential terrorists, who are believed to be more likely to attack targets identified with the establishment in their own countries in the West.Nonetheless, no countries from Europe have been added to the travel warning list, despite the threat. In addition, the influx of thousands of Syrian refugees to eastern Greek islands and the country’s economic collapse have not changed the assessment for Greece.The advisory also focused largely on Africa, in particular the Horn of Africa where the Somalian terrorist group Al-Shabab operates, and parts of western Africa, such as northern Nigeria, where the Islamist terrorist group Boko Haram holds large swaths of land.Ben-David said that the deadly bombing in Thailand last week has been closely watched by the bureau, but that it hasn’t changed their assessment of the safety in the country, in that the attack does not appear to have been directed at Israeli or Jewish targets.Turkey, perennially one of the top destinations for Israelis despite tensions between Jerusalem and Ankara, is still seen as unstable from a security standpoint, and a low level travel warning remains on the country.In Uman, the Ukrainian village where around 30,000 Israelis and Jews from around the world are expected to visit this year for the annual Rosh Hashana pilgrimage to the grave of Rabbi Nahman of Breslav, security is the responsibility of the local authorities and there is no change in the assessment for Ukraine, even with the fighting in the East.The Sinai Peninsula continues to be a serious concern for Israeli officials, who see the security situation worsening as jihadi groups in the region continue their war with the Egyptian Army and target westerners, and due to the emergence of an Islamic State affiliate group.