EU Ambassador to Israel: A two-state solution is the best antidote to BDS

“The BDS phenomenon is a rather marginal one. At this point in time it has very little effect on Israel,” Lars Faaborg-Andersen says. 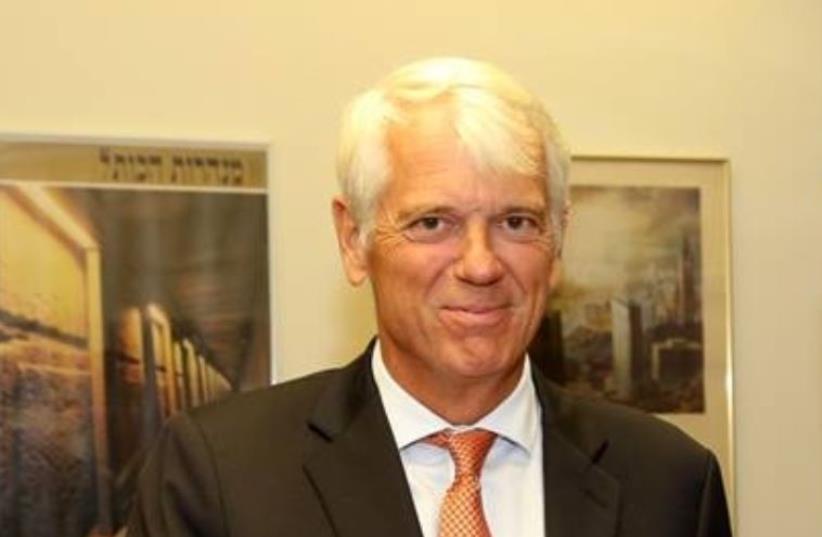 Lars Faaborg-Andersen
(photo credit: Courtesy)
Advertisement
Resolving the Israeli-Palestinian conflict is the best way to combat the boycott, divestment and sanctions movement, US and EU ambassadors said on Monday at a conference on the subject in Jerusalem sponsored by the Hebrew daily Yediot Aharonot.“If more effort is put into [the peace process] and showing a will to move forward and to obtain progress, it will weaken the BDS movement,” the EU’s ambassador to Israel, Lars Faaborg-Andersen, told the large crowd that gathered at Jerusalem’s International Convention Center.US Ambassador to Israel Dan Shapiro added that negotiations or some political horizons is “one of the most effective tools to defeat boycotts and delegitimization. So it is certainly in Israel’s and our interests to find our way back to negotiations with the Palestinians, and until then, to take steps to keep the two state solution viable for the future.”The link between the conflict and BDS was one of the points of contention among the many speakers, a number of whom said the battle is an existential one about Israel’s right to exist.“The claims of the proponents of BDS and the organization’s criticism, is based on a hatred and enmity of Israel, including anti-Semitic elements with regard to the right of Jews to return to their homeland,” President Reuven Rivlin told the conference.Transportation Minister Yisrael Katz charged that the BDS movement was trying to undermine Israel and that many of its members had relations with those who were hostile to Israel.“It’s important to know who your enemies are,” he said.Shapiro agreed that hatred of Israel is certainly part of the issue.“There are those who have a truly anti-Israel agenda independent of the conflict, but there are those who are persuadable, and there are significant numbers of such people,” he said.Lars Faaborg-Andersen agreed that the “most effective antidote to the BDS movement is to solve the Israeli- Palestinian conflict,” he said.BDS would quickly become ineffective if there were a two-state solution and the movement was not piggy-backing on Israel’s continued conflict with the Palestinians, he said.“We do not expect Israel to solve the issue on its own. It takes two to tango,” he said.“What is important is that Israel is not seen as working at cross purposes by undermining the possibility of a two-state solution,” Faaborg-Andersen said.Israelis have linked the EU with the boycott movement in the last few months because of its controversial decision to place consumer labels on products produced over the Green Line.But at the conference, Faaborg-Andersen gave an impassioned speech against any boycotts, including of West Bank settlements.Prior to his arrival at the conference, the BDS movement penned a letter to EU Foreign Policy Chief Federica Mogherini asking that she forbid him from attending. They were upset that Faaborg-Andersen was scheduled to speak on a panel that also featured former settler leader Dani Dayan.Mogherini rejected their request.The European Union is against BDS, Lars Faaborg-Andersen told the conference.EU policy toward Israel has been one of engagement and it has a “long record to prove it,” Faaborg-Andersen said.At 30 billion euros a year, Israel is the EU’s largest trading partner, he said. It is also one of its most important partners in science and technology, the ambassador added.“But the EU considers West Bank settlements to be “illegal under international law and a hindrance to the peace process,” he added.The settlements “are not part of Israel,” he said and as a result, the EU’s agreements with Israel do not apply there.This does not mean that the products are boycotted, Faaborg-Andersen said, as he explained that “settlement products are welcome on the EU market.”“But they are not being given the same preferential treatment as products coming from Israel proper,” he said as he referenced the EU policy not to extend its free trade agreement to West Bank settlement products.“This doesn’t amount to any kind of a boycott. The products are being sold in Europe, but they have to be correctly labeled,” Faaborg-Andersen said.“It is important to distinguish between BDS and a policy that we have on settlements, which has nothing to do with BDS,” he said.“It is about giving the consumer the correct information about the origin of the product.”“Not even the Israeli government claims that the West Bank is part of Israel so why would we label them part of Israel. We have no problem with those products but they have to be correctly labeled,” he said.Faaborg-Andersen said that he did not believe “The BDS phenomenon is a rather marginal one. At this point in time it has very little effect on Israel,” he said.“We have to stay vigilant to ensure that it doesn’t get further support,” Faaborg-Andersen said.When combating BDS it is important to keep a sense of proportion and to ensure that BDS is not given an additional platform through efforts to combat it, he said.“There is a big, big difference between legitimate criticism of Israel policies and BDS,” he said.It is important to recognize the difference because otherwise one cuts off dialogue with the critics who otherwise support Israel, Faaborg-Andersen said.Shapiro spoke of the US’s strong support for Israel and its commitment to fight any kind of boycott and delegitimization of Israel.“Let me restate our vigorous opposition to efforts to isolate or boycott Israel; our demonstrated commitment to defeating such efforts; the proven success of our counter-boycott strategy; and our pride in what our two nations have achieved in expanding our common prosperity,” said Shapiro.The US is depending on its economic partnerships with Israel and he called on other nations to follow suit.