Settler movements pressure government to implement its policy against illegal structures, claims the PA is behind the constructions to gain control in Area C. 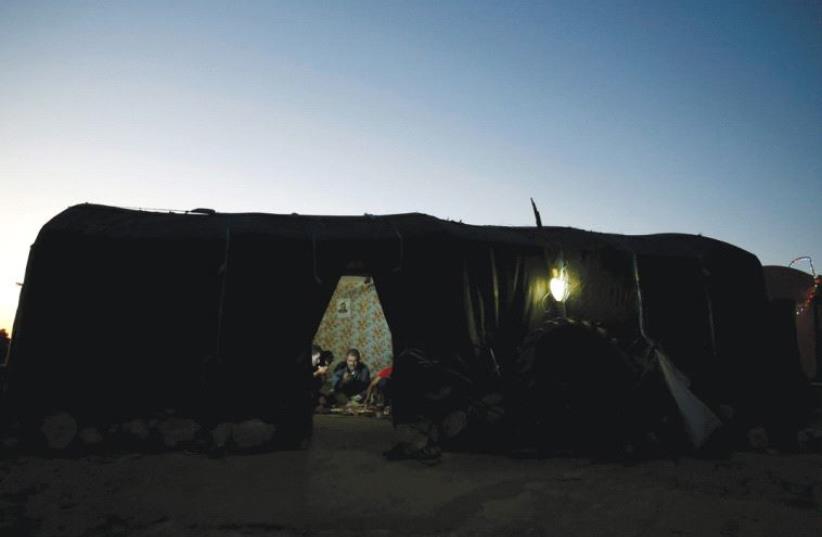 A Beduin man eats with his family in their tent in Sussiya near Hebron
(photo credit: AMMAR AWAD/REUTERS)
Advertisement
The European Union on Monday called on Israel to halt the demolitions of Palestinian structures, as Defense Minister Avigdor Liberman delayed by two days the publication of his opinion on the pending demolition of the Arab village of Sussiya.“The Israeli authorities must halt demolitions of Palestinian houses and property, in accordance with its obligations as an occupying power under international humanitarian law, and to cease the policy of settlement construction and expansion, of designating land for exclusive Israeli use and of denying Palestinian development,” the European Union said in a statement it issued to the media.Among the pending demolition cases that has garnered intense media focus and international attention is the fate of Sussiya, which is composed of some 100 tents and modular structures.It is home to over 300 Palestinians.The High Court of Justice is in the midst of hearing an appeals case regarding the question of whether the village’s agricultural lands in the South Hebron Hills region of the West Bank can be used for permanent housing.It’s the latest chapter in a decades long land dispute between the Sussiya villagers and the Defense Ministry.Since taking up the post of defense minister in June Liberman has been quiet on his opinion with regard to the case.Work on the possible resolution of the issue had been put on hold in the last month, as both the Civil Administration and the villagers wait for him to render his opinion.The High Court of Justice has insisted that he must do so by August 15. Liberman, however, has asked the court for a two-day delay.Israel is under increased pressure by the United States and the European Union to stop all demolitions of Palestinian structures.The government, however, is under pressure from right-wing politicians and settlers to demolish the Palestinian illegal structures, many of which are modular.Non-governmental groups such as the Jerusalem Periphery Forum and Regavim have argued that the Palestinian Authority is behind the illegal construction, which is strategically placed to increase its hold on the Area C of the West Bank.But the international community, including the United States, the European Union and the United Nations believe that Israel’s demolition policies are a form of population transfer.They are particularly upset that Israel has issued very few permits for Palestinian master-plans or building in Area C of the West Bank.Among the most vulnerable, they have said, are the Palestinian herding and Beduin communities there.“Bedouin communities in the West Bank have faced repeated confiscations and demolitions in recent years, which have put them in grave humanitarian need and risk ending in forced transfers.“As stated in the recent Quartet report, such a policy, including the recent high rate of demolitions, is steadily eroding the viability of the two-state solution and raises legitimate questions about Israel’s longterm intentions,” An EU spokesperson based in Brussels said.In addition to Sussiya, the High Court of Justice is also hearing a petition on the Al-Khan Al-Ahmar School in Area C of the West Bank, located near Kfar Adumim.The school, which was established in 2009 with Italian funding, services 170 Palestinian boys and girls from first to ninth grade.The High Court of Justice has asked the state to render its opinion on the matter by early this week. But the state has asked for a delay until next week.The Palestinians are now nervous that the state plans to move against the school.