A Palestinian assailant's final morning leading up to attack

See full text below of farewell letter written by the assailant in Friday's ramming attack that was obtained by the 'Post.' 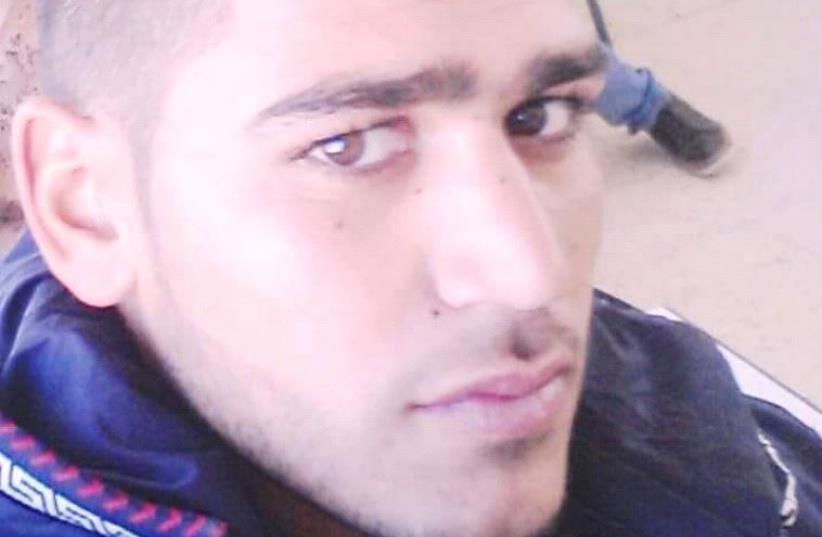 Firas Khdour
(photo credit: KHDOUR FAMILY)
Advertisement
Musa and Hala Khdour and their six sons and daughters woke up and ate breakfast Friday just as they do any other weekend morning in their home in Bani Naim, a village near Hebron. Yet, Firas, 17, and the second oldest of the Khdour children, appeared to be fasting as he refused to eat. After breakfast, the family prayed at a local mosque, returned to their home, and drank coffee together in their living room. 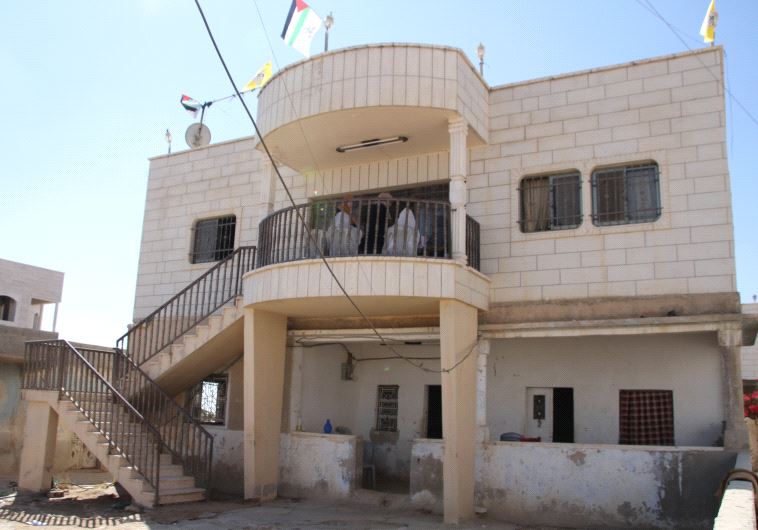 The Khdour Family home (photo credit: TOVAH LAZAROFF)Soon thereafter, Firas stood up and walked out. Thirty minutes later, Musa received a phone call from a friend, asking if he knew where his son, Firas, was and Musa responded that Firas was at home.“I told my friend that Firas was in our home and then went to look for his car and found that it was gone,” Musa told The Jerusalem Post in his living room on Sunday with tens of families members sitting alongside.Musa’s friend then told him he had seen Firas’s car on social media in what appeared to be a ramming attack. Musa was in a state of total shock.“God knows what exactly happened, but I know Firas and he is upright, good-hearted, and a great student. He wanted to go to Germany to study there. I do not believe that he carried out an attack,” Musa, clearly overcome with grief, remarked. “He was responsible for supporting our home. Whenever we needed help with something, we turned to him.”An IDF spokeswoman expressed no doubt in saying that Firas and his cousin, Raghd, who was sitting in the passenger seat of the car, carried out a ramming attack on Friday at one of the entrances to Kiryat Arba.“The terrorists ran their car over civilians and soldiers and our forces responded, firing and shooting one of them dead and wounding the other,” the spokeswoman told the Post adding, “A number of the civilians were wounded.”A farewell letter written by Firas and given to the Post by an anonymous source in Bani Naim appears to indicate Firas had no intention of returning on Friday. “Those who were killed in the path of God are not dead, but rather alive with their God,” the letter began. “I call on God to accept me and my sister, Raghd, as martyrs.“Separating from my family and loved ones is hard, but meeting God is better than staying in the world with people," the letter stated, adding,“I recommend the people to watch over my parents and the young people to follow the path of Jihad.”Firas also called on Bani Naim locals to refrain from believing in rumors that he and Raghd had an illicit relationship. “Raghd is [like] a sister to me. I swear to God that there was nothing between the two of us except for our close familial relationship.”Rumors had spread around Bani Naim in the past weeks and months that Raghd and Firas had an illicit relationship. 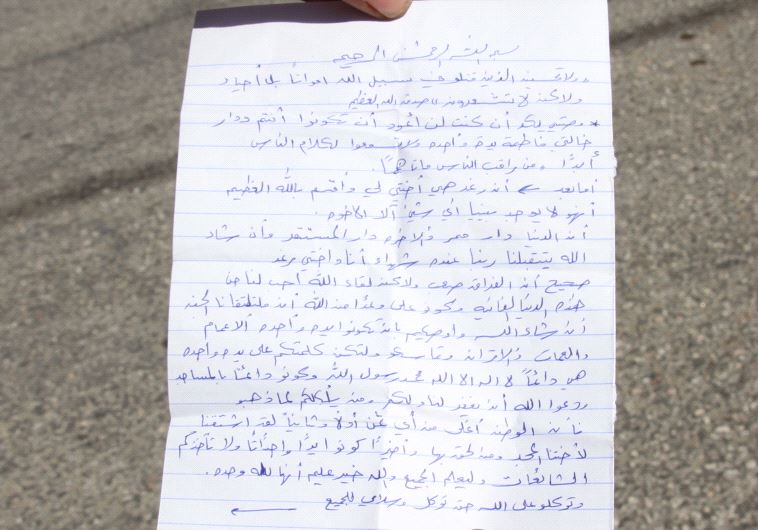 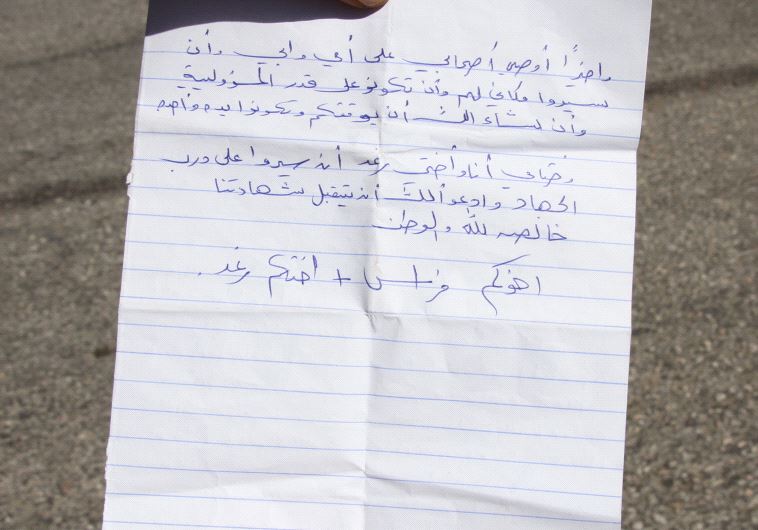 The IDF is holding Firas’s body, and Raghd is being treated at Shaare Zedek Medical Center in Jerusalem.At the mourners’ tent in a Bani Naim schoolyard, bright-yellow Fatah flags and posters congratulating “the martyr Firas” are ubiquitous. Community and family members are filing in and out of the tent, offering their condolences to the Khdour family. Meanwhile, young men offer coffee and dates to mourners, saying “may God have mercy on him” and “may he live.”Mahmoud Khdour, Firas’s cousin, told the Post he does not believe Firas perpetrated the ramming attack. “He was a pious, joyous, and athletic person. He was not the kind of person who would carry out such an act,” said Manasra.Bani Naim, a village of some 30,000, has been caught in the middle of the violence over the past year. Muhammed Taraira, 17, carried out a stabbing attack in Kiryat Arba in June, killing 13-year-old Hallel Yaffa Ariel in her sleep. Also in June, Majd Khdour, a cousin of the perpetrators of Friday’s attack, rammed her car into another car near the entrance to Kiryat Arba.Following the June attacks, the IDF responded by revoking work permits of many Palestinian workers, raiding the village and intermittently closing entrances to Bani Naim. This time, however, the IDF has seemingly responded less forcefully.Ismail Manasra, a local teacher, told the Post: “This time, they have been less forceful, only raiding the village once and closing some of its entrances. They have not revoked work permits or taken other measures, but they could do that at any time,” Manasra says. 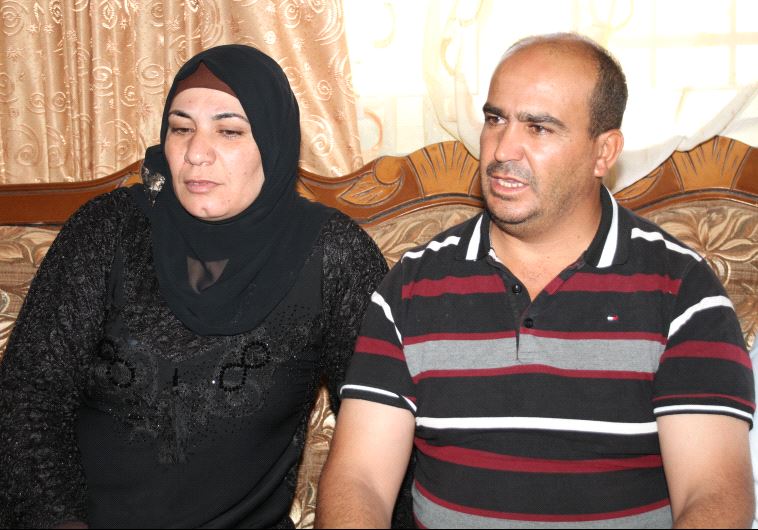 Musa and Hala Khdour in their living room in Bani Naim on Sunday afternoon (photo credit: Courtesy)
In August, Defense Minister Avigdor Liberman unveiled a “carrot and stick” plan that aims to punish villages in the West Bank whose residents attack Israelis and provide economic benefits to villages whose residents do not.Bani Naim Mayor Mahmoud Manasra did not respond to requests for comment on Sunday, but told the Post in a telephone conversation on Saturday that he was calling on Israel not to take harsh measures against the village.“I call on Israel to end this collective punishment because there are 30,000 people who are not responsible for individual acts,” Manasra said, referring to the closures to village entrances.Musa and his family plan to continue to welcome mourners and hope to hold a funeral for Firas when the IDF returns his body. “Allah judges us, for He is the best disposer of affairs,” said Musa.Meanwhile, just across from Bani Naim in Kiryat Arba, residents and the IDF are on full alert.Tovah Lazaroff contributed to this story.