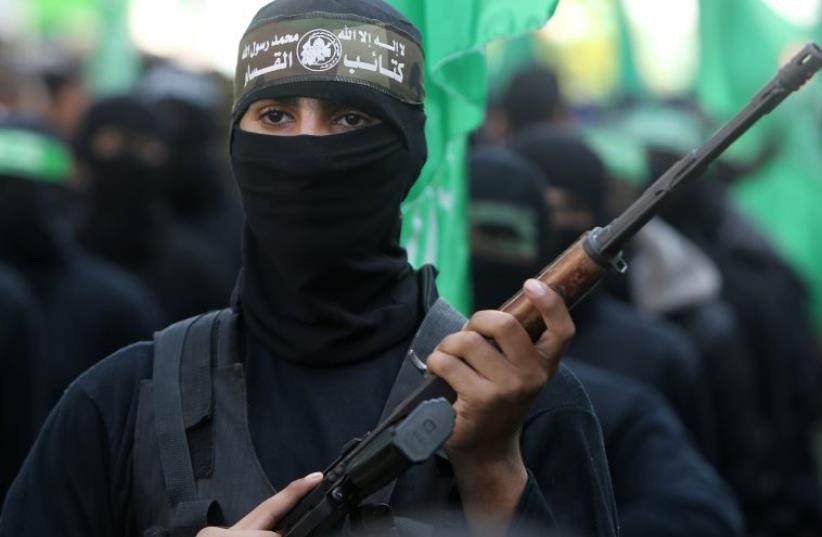 Palestinian militants of the Ezzedine al-Qassam Brigades, the Hamas' armed wing, take part in a rally in Gaza City
(photo credit: MAHMUD HAMS / AFP)
Advertisement
Hamas and other Palestinian factions have decided to resume suicide attacks against Israel, according to a report published by a Lebanese newspaper on Thursday.Al-Akhbar, which is affiliated with Hezbollah, claimed that Hamas was seeking to undermine the Palestinian Authority in the West Bank through the participation of a large number of Fatah activists in the current wave of terrorism against Israelis.The paper claimed that Hamas was now considering ordering its “sleeper cells” in the West Bank to carry out attacks inside the Green Line.It said that a Hamas terrorist cell that was recently busted by Israel in the village of Abu Dis outside Jerusalem was preparing to carry out suicide bombings inside Israel.
IDF raids bomb lab in Abu Dis
The report also claimed that the cell was uncovered after one of its members contacted a PA security officer and asked for forged documents for the Hamas terrorists.An unnamed Hamas official was quoted as saying that the suicide attacks were supposed to be carried out soon. The official said that the terrorist cell was also planning to target Israeli security and political officials.The paper quoted anonymous sources in Hamas as saying that the Islamist movement was in touch with Fatah activists in the West Bank.Hamas officials in the Gaza Strip refused to comment on the Lebanese newspaper report.Hussam Badran, a spokesman for Hamas, said that the wave of attacks on Israel would continue and escalate during 2016.The new year would witness more “resistance operations,” he said, without elaborating.One government official in Jerusalem responded to the report by saying that Israel “knows for a fact” that Hamas is “interested in escalating violence on the West bank, but trying to keep Gaza quiet because they think they have something to lose.”Hamas’s goals in inflaming the West Bank is twofold: to kill Jews and to destabilize the PA, the official said.He added that the reason there have not been suicide attacks during the current wave of terrorism is not because Hamas does not want to carry them out, but because it has been unable to do so.“We always have to be prepared for this type of terrorism,” he said. “Since the last wave of suicide bombings a decade ago, we have developed mechanisms and security ways to deal with the threat.”Asked if the PA also had a hand in preventing suicide bombings, the official said that Israel has been primarily responsible for thwarting the attacks.Prime Minister Benjamin Netanyahu, meanwhile, said in an address to graduates of the air force pilots course that in recent months the IDF and security services have been “aggressively” fighting the terrorist elements. This struggle against lawbreakers is also against those from within, he said.“We will not tolerate murderers in our midst,” he said.Netanyahu said that Islamic extremists – Sunni extremists led by Islamic State and Shi’a extremists led by Iran – pose a threat to civilization. The only thing that can stop them, he said, is if the free world internalizes the gravity of the threat and responds with a determination that matches that danger.“This might be starting to happen, but not yet completely,” he said.History has taught that in order to repel evil it is not good enough to wait for the next blow, but rather one must chase after and pursue the enemy, the prime minister said.“That is precisely our policy: to cut off the threat in its tracks, not to allow our enemies to endanger the security of Israel. We will hit anyone who rises up to harm us,” he said. “There is a time to block, and a time to strike.”Netanyahu said that while Iran and Islamic State threaten many countries, “they explicitly threaten our existence. We do not ignore these threats, nor are we frightened by them. We have proven again and again over a hundred years of Zionism that we can overcome our enemies.“We are developing military capabilities on land, air, sea and cyber that allows us not only to defend ourselves, but also to attack our enemies – if need be – with force and great power,” he said.