'Hamas doesn't want war, but the situation in the Palestinian territories is explosive'

Head of IDF Military Intelligence briefs Knesset Foreign Affairs and Defense Committee, reportedly says tunnels are not an existential threat, but warns of volatile potential in the territories. 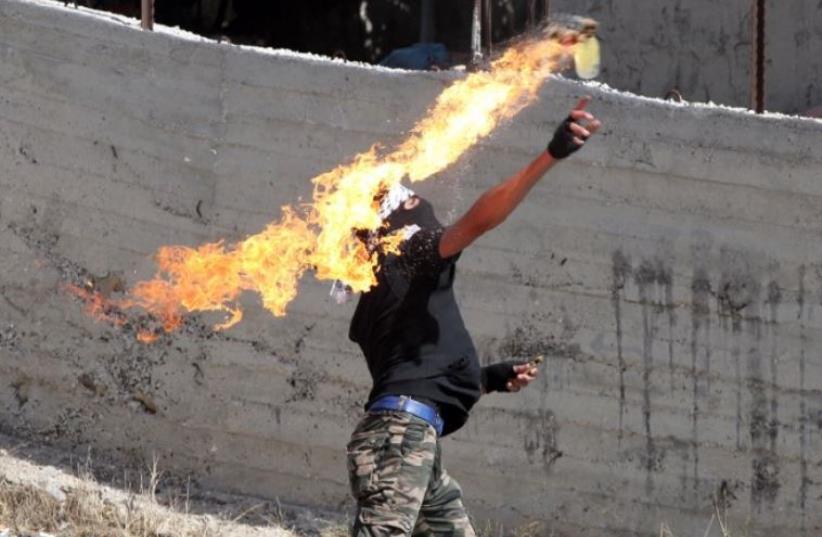 A Palestinian protester throws a Molotov cocktail towards Israeli security forces during clashes in the village of Beit Omar
(photo credit: AFP PHOTO)
Advertisement
IDF Military Intelligence chief Maj.-Gen. Herzi Halevy said Wednesday before the Knesset Foreign Affairs and Defense Committee that there are low chances for the outbreak of war with either Hamas or Hezbollah, because the two terror organizations are not interested in a military confrontation with Israel.According to sources who were present at the closed-door discussion, the MI chief explained that Hezbollah is embroiled in fighting in Syria and does not want to open an additional front with Israel at the moment. However, he added that whenever the next conflict with Hezbollah does break out, the Lebanese army will join the war because of Lebanon's growing dependence on Iranian aid.Addressing the State Comptroller report on Operation Protective Edge, which was released on Tuesday, Halevy praised the quality of intelligence gathered by Israel ahead of and during the war and said that cooperation with the rest of Israel's intelligence organizations is very good today. According to sources who were present during Halevy's briefing, he said that the IDF has more information on tunnels today than it did in the past, but that there will always be surprises. However, he added that while the tunnels are dangerous, they do not constitute an existential threat to Israel.
IDF discovers tunnel from Gaza underneath building on August 8, 2014 (credit: IDF SPOKESPERSON"S UNIT)
In regard to the situation in the Palestinian territories, Halevy reportedly said that, absent a diplomatic horizon and due to the lack of economic stability, the situation is explosive. In order to decrease this explosive potential, he added, initiatives must be advanced to improve the Palestinians' economic situation.Yesh Atid MK Yaakov Peri, who was a member of the security cabinet at the time of Operation Protective Edge and formerly served as the head of the Shin Bet (Israel Security Agency), said after the briefing by Halevy: "We heard now in the Foreign Affairs and Defense Committee a briefing from the Military Intelligence chief who said that MI excelled in Operation Protective Edge. That is his opinion and I understand it, however, when you closely read the Comptroller's report - there were intelligence gaps and there was a problem of translating the intelligence picture into an understanding of whether there was or was not a strategic threat, which is one of the roots of the problem."Peri added that "there is also today those who don't see the tunnels as a strategic threat. True, the tunnels cannot cause the toppling of the regime in Israel. However, if we take a theoretical scenario in which terrorists come out of a tunnel into a kindergarten in one of the Gaza border communities, there is no doubt that this could change the strategic balance in the battlefield - not only in the Israel-Gaza battlefield, but in the entire Middle East."According to Peri, there was no "political or military preparedness to take care of the tunnel threat."He added that "there is not great likelihood for a war or conflict in 2017, however, Israel is surrounded from the North to Eilat and it is explosive. A mistake by a terrorist or soldier could start a fire that a multitude of wise men will struggle to put out."