How Israel could take the fight directly to Iran

By CHARLES BYBELEZER/THE MEDIA LINE
FEBRUARY 17, 2018 01:15
Iranian President Hassan Rouhani gestures as members of Iranian armed forces take part in a rally marking the anniversary of Iran's 1979 Islamic revolution, in Tehran, Iran, February 11, 2018
(photo credit: PRESIDENT.IR/HANDOUT VIA REUTERS)
Advertisement
The conflagration this past weekend between Israeli and Iranian forces is being billed as a new stage in the longstanding, albeit to date largely covert, war between the two adversaries. For the first time, Iranian troops perpetrated a direct attack on Israel, initially by sending a drone across the border from Syria and then by firing the anti-aircraft missile that downed an IDF jet which had reentered Israeli airspace after conducting a retaliatory mission.The events were significant both because of the success in downing the Israeli warplane, the first such occurrence in decades, but also because it evidences Iran’s growing foothold in the Syrian theater, a development that Jerusalem vehemently opposes and has vowed to prevent at all costs. Overall, Iran’s actions suggest that it feels sufficiently emboldened to use its own forces to harm the Jewish state.The incident constitutes a strategic shift, according to Lt.-Col. (ret.) Yiftah Shapir, a career officer in the Israel Air Force and the former head of the Military Balance Project at Israel’s Institute for National Security Studies, “as it marks the first occasion that the Iranians openly engaged Israel, whereas previously this was done via its proxies. It may be,” he qualified, “that the Iranians misjudged the [intensity of the] Israeli response and that the status quo will be restored for a period of time.”By contrast, Saturday’s flare-up was not the first time that Israel directly struck Iranian assets. In December, the IDF reportedly destroyed a military facility being built by Tehran ​​in al-Kiswah, just south of Damascus. Notably, in 2015, Israeli strikes killed at least six Iranian troops in the Syrian Golan Heights, including a general in the Revolutionary Guard Corps. Also targeted was Jihad Mughniyeh, son of the notorious former Hezbollah operations chief, Imad Mughniyeh, who was himself killed in an Israeli-attributed 2008 car bombing in Syria.Furthermore, the Mossad has been implicated in the assassination of multiple nuclear scientists on Iranian soil, not to mention the deployment of the Stuxnet cyberweapon, a computer worm developed in conjunction with Washington that wreaked havoc on Iranian nuclear installations even after being discovered in 2010.So whereas the latest confrontation along the northern border was in some ways exceptional, it does not inevitably entail a long-term escalation or that the conflict be brought out into the open, although these are both distinct possibilities.In fact, while the political and military echelons have made clear that Israel is not seeking an escalation, its so-called “red lines” – namely, the transfer of advanced weaponry to Hezbollah in Lebanon, and Iran’s military entrenchment in Syria – continue to be violated; this, despite the IDF having conducted well over 100 cross-border strikes to protect its interests over the past 18 months. Additionally, Iran has started construction on a subterranean facility in Lebanon to manufacture long-range precision missiles that could allow Hezbollah to target, with great accuracy, critical Israeli infrastructure in a future war.Taken together, these developments raise the question of whether Israel’s deterrence vis-a-vis Tehran and its Lebanese proxy may be weakening, which would necessitate modifying its military strategy. 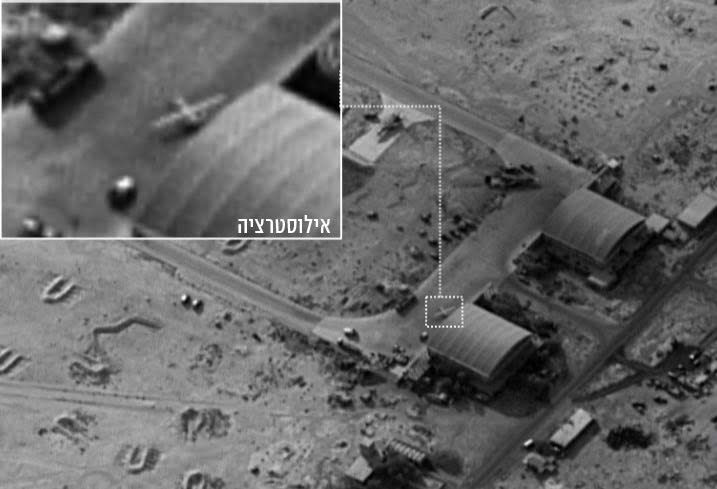 The Iranian drone (inset) that entered Israeli airspace was launched from a Syrian base in the Homs desert, which Israel later bombed (IDF SPOKESPERSON'S UNIT)“ISRAEL’S [decision-making process] now depends largely on what the Iranians and Hezbollah do moving forward,” Brig.-Gen. (res.) Nitzan Nuriel, former director of Israel’s CounterTerrorism Bureau, told The Media Line. “Throughout the years Israel has taken action all over [the region] to make sure that its interests are met. Israel needs to use all the tools available to it, including through its allies.”While one incident is unlikely to cause a dramatic change in Jerusalem’s calculus, it is possible that the IDF could eventually adopt a page out of Tehran’s playbook by taking the fight directly to the Iranian heartland.To this end, most experts agree that a full-scale military operation targeting Iran’s atomic facilities – the likes of which Prime Minister Binyamin Netanyahu reportedly advocated for in 2012, but which was shelved due to opposition from the defense establishment and the Obama administration – is currently off the table. While the debate previously centered on the possibility of setting back Iran’s nuclear program would justify the risks in such an operation, today the political climate has rendered the discussion moot.The signing of the Iran nuclear deal in 2015 effectively ended the possibility for such a mission, the ramifications considered untenable. On the one hand, with the US still committed to the agreement – in addition to Russia, China and European nations – the political fallout from any major military foray into Iran would dwarf the backlash in the wake of the destruction of the Osirak nuclear reactor in Iraq in 1982 and the atomic facility in Deir ez-Zor in Syria in 2007. On the other hand, since the accord was forged Tehran has deepened its penetration into Lebanon, Syria and the Gaza Strip, all but ensuring that the targeting by Israel of its atomic infrastructure would ignite a war on all three fronts.Moreover, as US President Donald Trump mulls withdrawing altogether from the deal, any Israeli action targeting Iran’s nuclear program – military or otherwise – could be self-defeating as it could hinder the American leader’s efforts to either reimpose “crippling” sanctions on the Islamic Republic or at the very least strengthen the atomic agreement by addressing, perhaps in a follow-up pact, Tehran’s ballistic missile program and regional adventurism.Nevertheless, Israel has non-military options according to former Mossad chief Danny Yatom. “Israel should consider all possibilities, including targeting Iran directly, but as part of a grand strategy. I would not exclude the potential that Israel will also use proxies,” he contended to The Media Line.“This could include mobilizing the People’s Mujahedin of Iran [MEK], for example, which may have carried out the killing of Iranian nuclear scientists on Israel’s behalf. Jerusalem has allegedly provided funding, training and possibly arms to the exiled anti-regime group.  The Paris-based MEK maintains a presence in Iraq and covertly in Iran, from where it has been accused of fomenting civil unrest, including the recent week-long nationwide protests. Recently delisted by the US as a terrorist group, the group also purportedly has links to Saudi Arabia and therefore could act as an intermediary between the Jewish state and Riyadh to facilitate the coordination of their positions. The Iranian dissident organization also monitors Tehran’s nuclear program (in fact it was the first non-state actor to reveal it) and might therefore serve as an additional intelligence source for Israel moving forward. 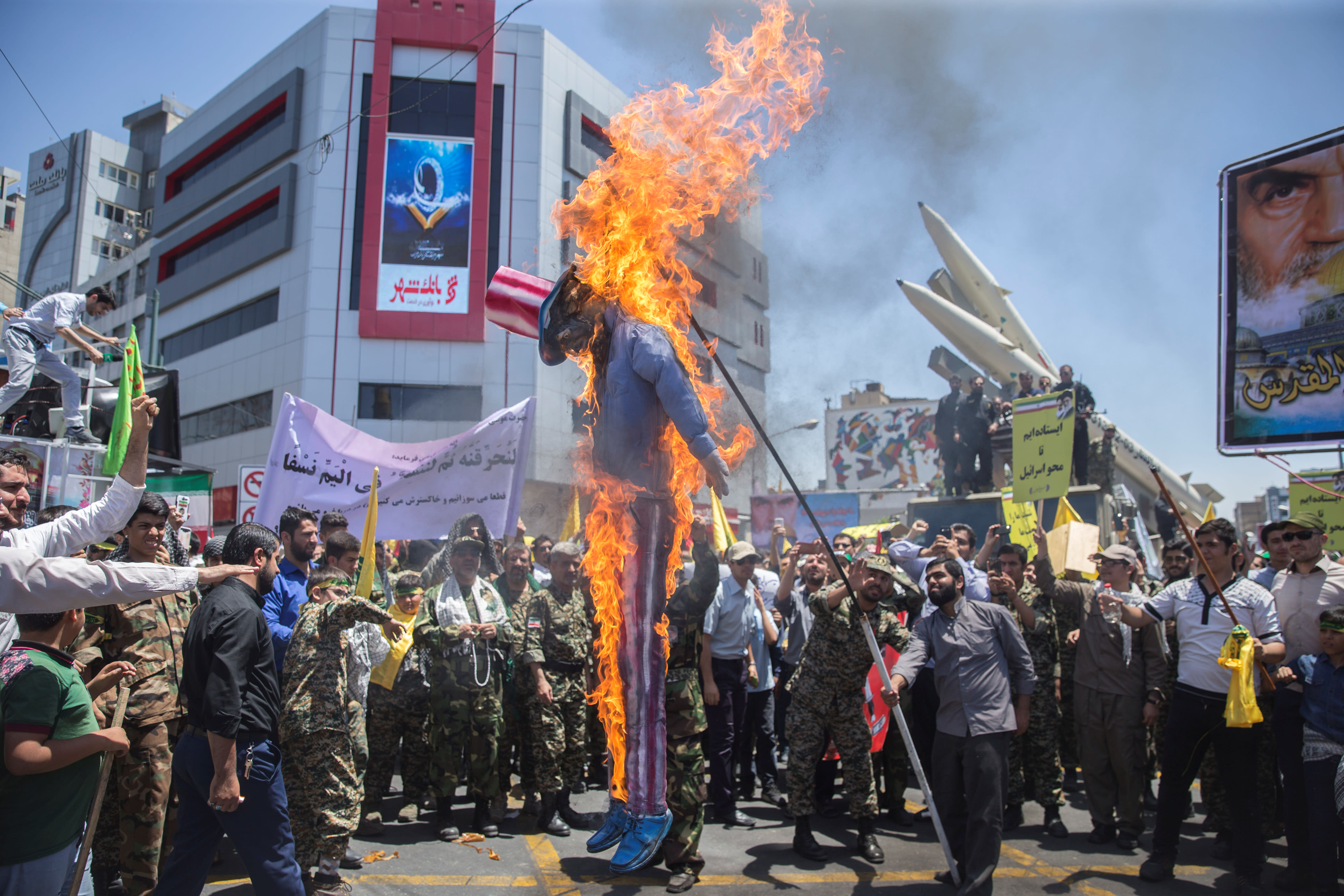 A scarecrow model is set on fire by Iranian demonstratorson during the annual pro-Palestinian rally marking Al-Quds Day in Tehran, Iran, June 23, 2017. (NAZANIN TABATABAEE YAZDI/ TIMA VIA REUTERS)IT IS A shadowy game no doubt, but the MEK, among other groups, could also be used as a conduit through which to convey Israel’s increasingly bold message to the Iranian masses, namely: “Jerusalem is not your enemy but rather the Mullahs themselves are.” In this respect, Netanyahu has numerous times over the past year directly addressed the Iranian people, reinforcing the fact that Israel marks a distinction between the regime and the population.“Israel’s policy of speaking directly to the Iranian people is correct, as today one can send messages not only via television, radio and written press but also through social media, which can reach millions,” Yatom stated. “Why not speak to the population over the heads of the Iranian regime?”The Israeli premier, in conjunction with US President Donald Trump, also publicly backed the recent demonstrations in Iran, suggesting that Jerusalem and Washington may be on the same page, readying to invest further energies into empowering the Iranian opposition with the aim of promoting regime change.“It is very important to address the Iranian populace, as relations with Israelis were strong not only under the shah, but also historically there is no real animosity between Iran and Israel,” Eliezer Tzafrir, the former head of the Mossad station in Iran explained to The Media Line. “The Iranian youth wants a major departure from the radicalism. They want Internet, they want men and women to be able to publicly meet. One day they will succeed.”Given the high stakes, Israel will in the near future like have to make some hard strategic decisions that could effectively chart its course for years to come. If it is serious about maintaining its qualitative military advantage – not in the region, mind you, but, rather, even along its borders – it may be forced to undertake significant operations in both Lebanon and Syria, which could very well lead to full-blown conflict.“We cannot preclude the possibility that Israel will take action to destroy the factory [in Lebanon], especially because it says so clearly, which effectively makes it an obligation,” Yatom stressed. “There is a very big difference between tens of thousands of rockets in Hezbollah’s hands that are not as precise and those that can potentially hit specific buildings.“In this case, the threat to Israel will be much more severe, and it is better to deal with it before they produce the technology than after,” he continued. “We must take into consideration that if that happens it might ignite a medium- or large-scale military exchange. But it appears that the situation is going to deteriorate anyhow unless there will be a coherent international effort to push the Iranians out of Syria and put more restraints on Hezbollah.”In the interim, Jerusalem might consider indirect action, allowing it to maintain plausible deniability while reducing the prospects of unintended consequences that could lead to a major intensification of the conflict. The impact of such a shot across the bow against the Iranian regime might resonate more loudly given the proximity to home.