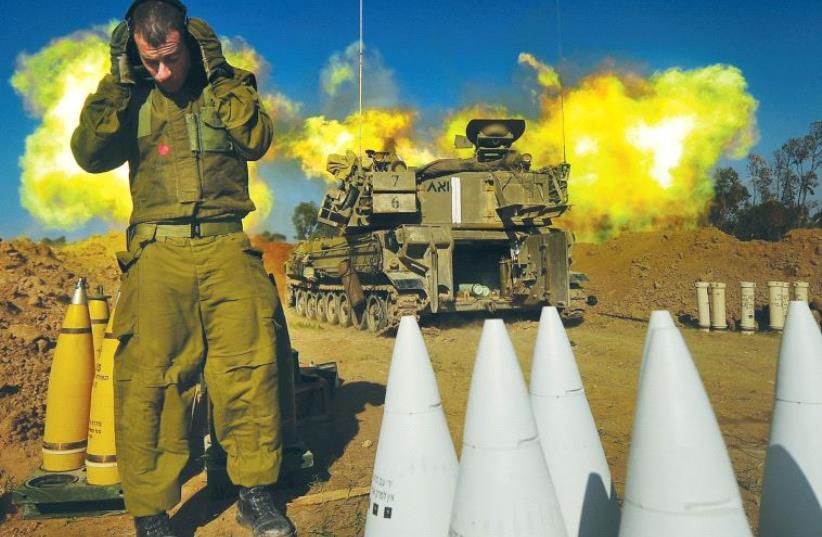 A SOLDIER from the recently established Flame of Fire Brigade participates in a live-fire drill in southern Israel last week.
(photo credit: IDF)
Advertisement
A newly established IDF artillery brigade recently held a large-scale war drill to prepare for a potential clash with Hamas in Gaza, but the live-fire training involved far more than shells.During the drill, the brigade, dubbed Flame of Fire – a part of the Sinai Division – also fired precision-guided Spear (Romach) rockets, produced by Israel Military Industries, which are surface-to-surface, GPS-guided weapons. The brigade operated radars that can detect the source of enemy rocket fire and enable rapid return fire and deployed additional measures that remain classified.The drill sheds light on the evolving role and capabilities of artillery units in the IDF. In recent years, these were dismissed as being no longer relevant to 21st-century asymmetrical warfare, yet they proved vital in operations that saved infantry units under heavy fire in Gaza during the 2014 war with Hamas.“There are some who eulogized the artillery before Operation Protective Edge,” Col. Rami Habudraham, 41, commander of the Flame of Fire Brigade, told The Jerusalem Post on Sunday.“In [the Gazan City district of] Shejaia, it was the artillery that rescued the Golani Brigade [from a coordinated Hamas ambush of antitank missiles and machine-gun fire],” he said.The Flame of Fire Brigade began its drill last week at the Tze’elim Ground Forces Training Center in the Negev. Its mock mission was to provide assistance fire to an infantry brigade moving into Gaza. The drill ended 50 kilometers away at the Shivta Field Artillery Training Center.Until recently, the Flame of Fire Brigade’s commanders were instructors at the Shivta training center before the IDF decided at the start of the year that the center would double as a cutting-edge firepower and field intelligence force and not be limited to training.Habudraham, who spent his entire military career in the Artillery Corps, said a new concept is evolving in the IDF that is tailor-made to the hit-andrun, vanishing hybrid enemies that seek to terrorize the Israeli home front with rockets and attack the IDF.“Statistical [non-accurate] fire can surprise the enemy and throw it off balance,” he said.“The catch is, how to deploy this firepower correctly. We did not do it so well in the Second Lebanon War. We did it well in Operation Protective Edge, and we will do it better in the next war. It is about firing small, accurate barrages that do much more damage.”There is an additional catch in the IDF’s evolving approach: the combination of mortar-shell fire with precision- guided rocket and missile fire against targets singled out by intelligence as being particularly important to damaging the enemy. Habudraham called this concept “focused, intelligence- based fire.”This is why artillery units in the IDF are increasingly housing units that are not artillery. Instead, they fire precision- guided rockets and missiles, including the Romach, which entered service in January, alongside the older Tamuz surface-to-surface missiles and other weapons.The Flame of Fire Brigade also has its own field intelligence unit and its own radars.The new concept began to take hold when the IDF formed the Golan Division in 2014 to deal with the unstable Syria border and the myriad of potential enemies that were active beyond the border. It was then that the IDF set up a new Fire Assistance Center in the Golan Division to fast-track strikes on enemies in a chaotic landscape.Across the Syrian border lie the al-Nusra Front, Hezbollah and ISIS, and the IDF reorganized its ground forces. As part of the changes, the Artillery Corps was given the ability to gather its own intelligence on the battlefield. The end result is a shortening of the sensor to shooter cycle, the officer said.In the coming years, the Artillery Corps will also receive GPS-guided shells, which will make logistics easier when traveling into hostile territory since less of the munitions are needed for strikes, meaning that fewer have to be hauled into the battlefield.Artillery brigades will provide critical assistance firepower to infantry units out ahead of them, a fact that shapes all of its training today, the commander said.“Hamas functions by attacking and then disappearing into urban areas,” Habudraham said. “One of the challenges is how to track them and respond rapidly while adhering to constraints posed by the need to avoid hitting noncombatants.”