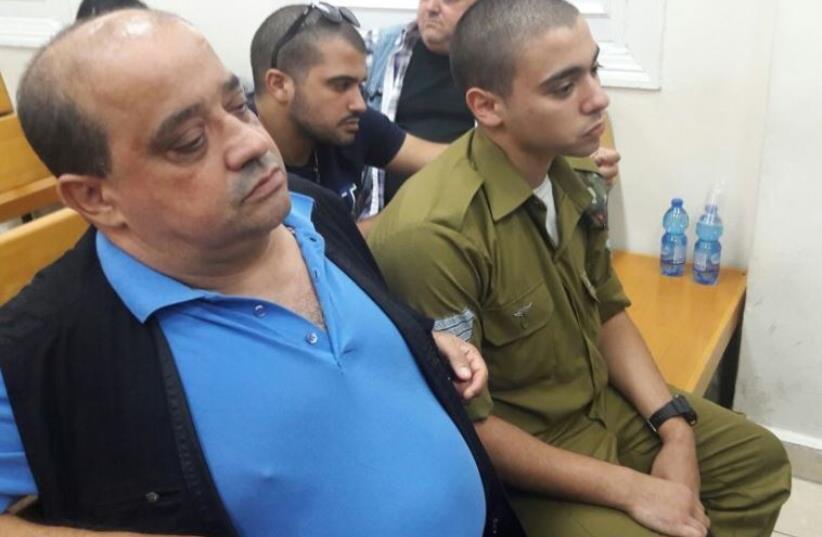 Trial of IDF Sgt. Elor Azaria, July 6, 2016
(photo credit: YONAH JEREMY BOB)
Advertisement
Attorney Ilan Katz, representing the soldier on trial for killing an immobilized terrorist in Hebron on March 24, stomped out of the courtroom on Wednesday, screaming at the prosecution and the court, “It is disgraceful what is happening here!” The main event in the manslaughter trial at the Jaffa Military Court that day was supposed to be the testimony of Hebron Brigade commander Col. Yariv Ben-Ezra, the highest ranking officer involved in the events surrounding Elor Azaria’s shooting of the terrorist.Ben-Ezra did make headlines and added to a mountain of evidence that lead prosecutor Lt.-Col. Nadav Weissman has built over the last two months.But for a period in the middle of the testimony, the charismatic and theatrical Katz stole the day.Katz and his co-counsel, Eyal Besserglick, were engaged in one of many battles with Weissman over whether the prosecutor was improperly interrupting their questions or the defense lawyers were asking Ben-Ezra misleading questions.When Weissman tried to cut in while Katz was slamming him as improperly interrupting, Katz yelled back at him: “Shut up!” Lead Judge Col. Maya Heller warned Katz that if he screamed again, he would be removed from the courtroom.Katz, infuriated that the court was criticizing him, and not Weissman for interrupting, screamed at both the court and the prosecutor and left the courtroom.The event was remarkable as if there are outbursts in court, they are usually from non-lawyers such as Charlie Azaria, Elor’s father, who exploded in an outburst at the prosecution on Tuesday.After cooling off, Katz returned to the courtroom and quietly apologized for yelling, though he made it clear that he still viewed the prosecution as out of line and the judges as giving the prosecution too much leeway to disturb the defense’s cross-examination.In Ben-Ezra’s testimony, he told the court that there was no operational justification for Azaria shooting terrorist Abdel Fatah al-Sharif, because there was no life-threatening danger once he was “neutralized.”The military command charged that he had never seen a soldier “depart so extremely from the [IDF’s] rules of engagement” as he did in the Hebron shooting.Video footage of the incident shows Azaria shooting dead Sharif after he had earlier stabbed a soldier at a checkpoint near Hebron, but had also already been neutralized.Azaria’s attorneys have claimed that the soldier shot the immobilized Palestinian because he thought he still posed a risk, either by reaching for a knife or because he suspected Sharif was wearing an explosive vest under his jacket.In his testimony on Wednesday, Ben-Ezra rejected Azaria’s claims that he acted in self-defense due to fear that the downed Palestinian stabber had an explosive on his person, saying “once you see the video, it’s clear these claims are disconnected from reality.”He noted that several IDF personnel stood right next to Sharif’s body without any sense of urgency, signaling that they were not concerned about a bomb.Ben-Ezra stated that he had not perceived Sharif’s jacket to be suspicious to the extent of rousing concern over a concealed explosive. He added that it is not rare for people to wear such articles of clothing at that time of year due to the weather in high-altitude Hebron, or even in the current summer season.Ben-Ezra asserted that the possibility of an explosive had not been mentioned at the scene, rather afterward in the media.Despite the fights in cross-examination in which Weissman did succeed at times to deflect the defense’s line of attack, Besserglick highlighted a weakness in the prosecution’s case.Besserglick called Ben-Ezra out for speaking to the media and recorded comments to troops, which found their way into the media, in which he slammed Azaria’s conduct.He implied Ben-Ezra’s actions had tampered with the trial and placed the threat of the “spirit of the commander’s wishes” as a dangling sword over all witnesses in the case, who were also soldiers under his command.Ben-Ezra rejected the criticism, saying he needed to teach his troops not to act like Azaria in future incidents and was not involved in his being recorded.Besserglick confronted Ben-Ezra with the fact that both a soldier and a lower level commander on the scene, both names being under gag order, had told police about a concern about a possible explosive vest.The lower level commander even called on his walkie- talkie to have an explosives expert sent to the scene to check Sharif.Ben-Ezra was unfazed, saying that whatever minor concern the lower commander had, he made the telephone call for the explosives expert while standing right next to Sharif, and would not have done this if he viewed a bomb as a real and serious danger.The back and forth laid made it clear that the court will need to decide which story to accept regarding the event in the spectrum of somewhat varying stories even among IDF commanders, in which all of them call Azaria’s actions unjustified since there was no real danger, but some speak of a potential danger.After Ben-Ezra was done almost a full day of testifying, the prosecution called a fellow soldier of Azaria’s, with mixed results.On one hand, the soldier testified that there was no threat of explosives in the incident.On the other hand, he thanked Azaria for shooting Sharif, saying that if there had been an explosive and Azaria had not shot him, he would be dead now.