By BEN HARTMAN, KHALED ABU TOAMEH
SEPTEMBER 7, 2015 15:16
Arson victim Riham Dawabsha laid to rest
Advertisement
Palestinian Authority President Mahmoud Abbas declared three days of mourning in the Palestinian territories over the death of Riham Dawabsha, 26, who died Sunday night after being severely burned in the July 31 arson attack on her one-story home in the West Bank village of Duma. Her husband, Sa’ad, and 18-month-old son, Ali, were also killed in the blaze.Thousands of Palestinians attended her funeral in Duma on Monday afternoon amid calls for revenge. The mourners also called for Palestinian unity and the continuation of the “struggle to end Israeli occupation.”Judea and Samaria District police said they are concerned about possible outbreaks of violence after the noon prayers this coming Friday and are preparing for what is expected to be a day of disturbances in the West Bank and elsewhere. 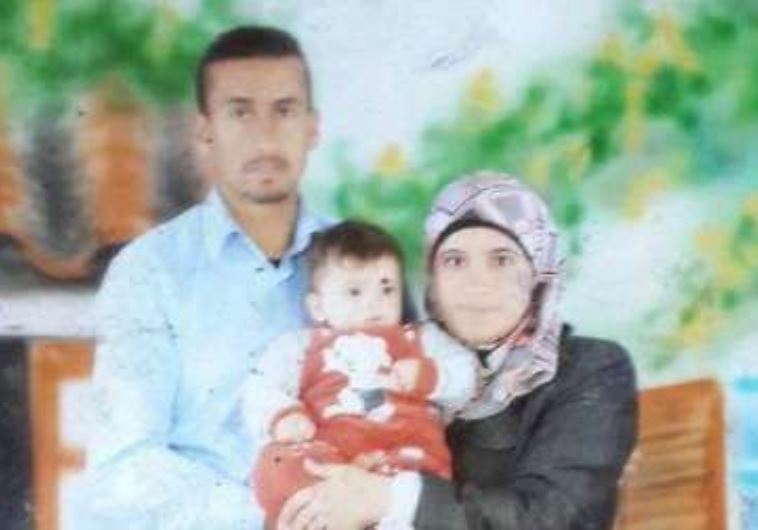 Riham Dawabshe (right) with her family
Terror attack in Duma
Prime Minister Benjamin Netanyahu expressed his condolences to the Dawabsha family on Monday and said that the security forces are doing all they can to catch the perpetrators and bring them to justice.Riham was buried in Duma next to Ali, who was killed immediately in the fire, and Sa’ad, 31, who died a week after the fire from severe burns around the time of their sixth wedding anniversary.The sole surviving member of the Dawabsha family, Ahmed, 4, is recovering from burns at Sheba Medical Center in Tel Hashomer.Riham’s brother-in-law, Nasser Dawabsha, who accompanied her body back home, said he believed Ahmed sensed that his mother had died.“Thank God, it was like Ahmed felt something terrible and he started crying and kept crying until 4 a.m., although in that time he was awake, but yesterday was the hardest period we’ve experienced with Ahmed because we couldn’t answer any of his questions. We were weak in front of Ahmed, we were defeated in front of Ahmed,” he said.Riham died on the eve of her 27th birthday.PLO Secretary-General Saeb Erekat described the Dawabshas as both the victim of “Israeli terrorism” and the international community’s failure to “end the Israeli occupation.”The Dawabsha family will not be the last victims unless Israel is held accountable for its “assaults” on Palestinians, Erekat said. The Israeli government, he said, is responsible for incitement and “all crimes” against the Palestinians.Erekat reiterated his appeal to the international community to provide protection for Palestinians.Fatah spokesman Ahmed Assaf said, “This crime reveals the true and ugly face of Israeli occupation.” It “makes it imperative for the international community to move toward ending occupation and establishing an independent Palestinian state.”Riham worked as a teacher at a school in the village of Jurish, south of Nablus. Her father, Hussein Dawabsha, said upon learning of his daughter’s death: “God gave me the best gift and then took it back.”The family gave the PA permission to perform an autopsy on her body in the Medical Institute of An-Najah University in Nablus. As of Monday evening, the PA had not announced its result.The father called on the Israeli government to bring the perpetrators to trial. He accused the government of backing Jewish extremists and asked: “Why hasn’t the Israeli government captured the perpetrators so far?” In the Gaza Strip, Hamas renewed its call to the PA to halt security coordination with Israel in response to the arson attack in Duma. Hamas also called for launching retaliatory attacks on Israel.Husam Badran, a senior Hamas official in the Gaza Strip, said that the only response to the arson attack was for Palestinians in the West Bank to step up their attacks on Israel. He claimed that the arson attack was carried out by IDF soldiers and settlers.Hamas spokesman Sami Abu Zuhri said that continued security coordination would be tantamount to “national treason” and “provides the occupation with an excuse to commit more attacks and crimes against the Palestinians.”Another Hamas official, Ismail Radwan, criticized the PA for failing to file a complaint against Israel with the International Criminal Court over the Duma arson attack. He also called for suspending security coordination and meetings between the PA and Israel.Radwan warned that the Duma attack would not pass without a response from Hamas and said that the group would find the appropriate time to respond to it.The Shin Bet (Israel Security Agency) and Israel Police investigation into the Duma arson attack is still ongoing, both agencies said on Monday morning.Due to a sweeping gag order on the investigation, neither agency would give any details about progress in the case.Reuters and Tovah Lazaroff contributed to this report.
Advertisement
Subscribe for our daily newsletter