The wife of the prisoner rebuked the militant faction for only acting in the event that her husband dies. 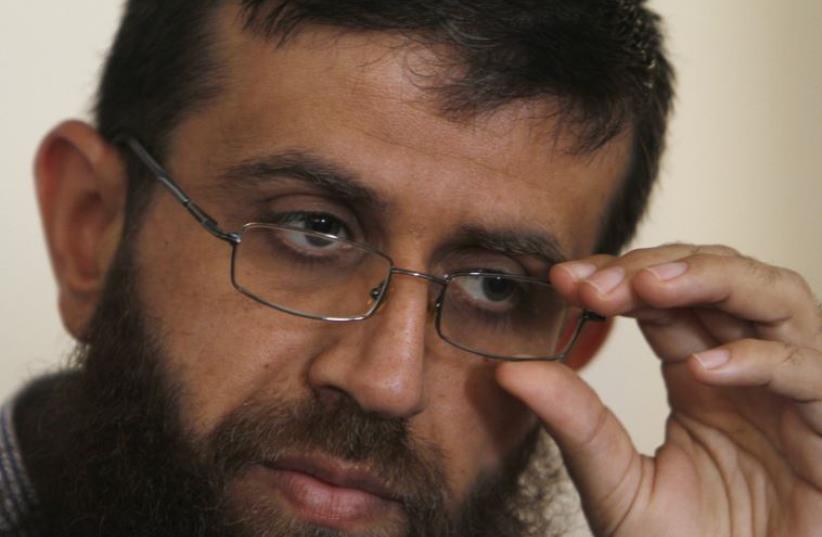 Khader Adnan
(photo credit: REUTERS)
Advertisement
The leadership of the Palestinian Islamic Jihad terrorist group has warned that it is willing to shatter the relative quiet in Gaza if one of its members, Khader Adnan, currently on hunger strike in an Israeli jail, dies.One leading figure in the terrorist organization, Khaled al-Batash, proclaimed that Adnan's life would not end without a shot fired."We will not allow our son [Khader] to die in jail from a hunger strike while the enemy remains secure and there is no response from the resistance," al-Batash said."The organization will be free from the conditions of the tahdiya [Arabic for lull] if Khader Adnan, the prisoner, dies."Al-Batash further called on the international community, the Palestinian Authority, as well as Egypt to intervene in the matter, however only the latter was approached directly on Friday with an appeal to help facilitate the the demands of the group. Adnan, who was initially arrested in the West Bank on December of 2012, is considered to be a high-ranking figure in the PIJ and has maintained a sixty-six day hunger strike in the year since his arrest. He has more recently undertaken another hunger strike entering its fifty-fourth day.However Adnan's wife, Randa Adnan, rebuked al-Batash's threats, and said she is not interested in the posthumous promises of the militant factions in Gaza. "We are not interested in the proclamations [made by Palestinian militants] that if Hader dies in jail, they will get involved," she said.Randa Adnan besought the factions to work for the immediate release of her husband, and stipulated that her family "does not want him as a martyr."According to Jawad Bolous, a leading attorney representing Palestinians in Israeli jails, there is no current agreement between Adnan and Israel's Prison Service, however he "is doing everything to end the prisoner's hunger strike so that Israel will not feel defeated."In a press conference in Ramallah, Bolous elaborated on Adnan's goal."What Adnan wants is clear: his release or a trial," he said. "He is willing to die for his goals and demands that Israel treats him like a human being." Bolous also commented on Adnan's medical condition, warning that it is "extremely severe, and he expected to die in any given minute.""His body is very weak and all the medical tests suggest an immediate threat to his life." Earlier this month Islamic Jihad's al-Batash made similar threats regarding Israel's promise to block the arrival of ships linked to the Freedom Flotilla III, which departed from Sweden to Gaza in May. Threats emanating from groups like Islamic Jihad have been a part of what many consider to be a deteriorating status quo in Gaza, where Hamas' rule has been challenged by splinter organizations and terrorist cells who have pledged allegiance to the Islamic State. Earlier this month a group calling itself the Omar Brigades took responsibility for firing a rocket from Gaza into Israel's South, claiming that the attacks were a response to Hamas' execution of an Islamic State supporter as well as the ongoing hunger strikes of Islamists jailed in Israel.  Yasser Okbi contributed to this report.