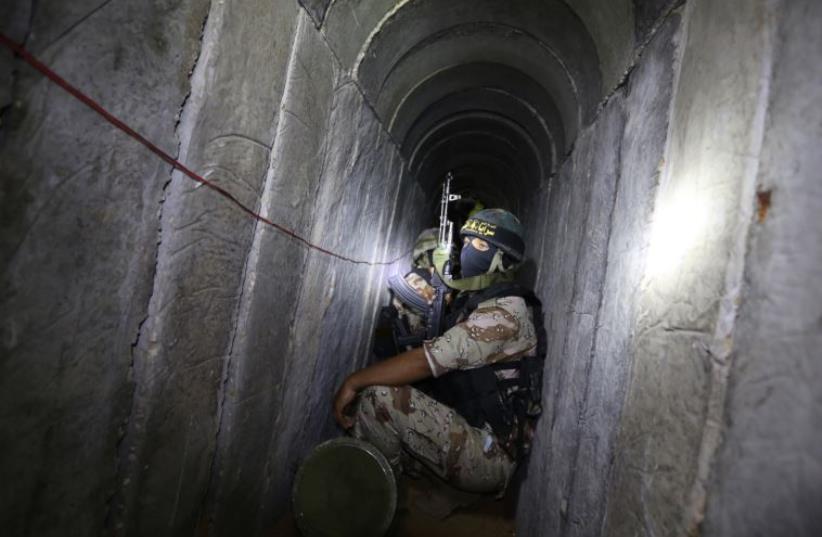 Palestinian militants from the Islamic Jihad's armed wing, the Al-Quds Brigades, in a tunnel in the south of the Gaza Strip
(photo credit: MAHMUD HAMS / AFP)
Advertisement
The IDF on Sunday said it was in possession of the remains of five of the 12 Islamic Jihad terrorists who died in last week’s tunnel explosion, after finding their bodies inside Israel.The IDF Southern Command and Gaza Division found the missing bodies while carrying out additional operations on the tunnel, an IDF statement said.The tunnel was detected using newly implemented advanced technology and destroyed last week in a controlled explosion inside Israeli territory.Seven other terrorists, including two senior Islamic Jihad commanders and two Hamas members, were killed in the tunnel that Islamic Jihad on Saturday said it had been building “for years.”Initially, seven bodies were found in Gaza. On Thursday, the head of the Coordinator of Government Activities in the Territories Maj.-Gen. Yoav ‘Poly’ Mordechai rejected appeals to enable searches for the five sets of remains before the remains of two IDF soldiers killed three years ago were retrieved and other missing Israelis accounted for. Mordechai told the head of the International Red Cross delegation in Gaza, Jacque de Maio, “Israel will not allow search operations in the area of the security barrier in the Gaza Strip without progress on the issue of Israelis kidnapped and MIAs.”Hamas is believed to be holding the remains of missing IDF soldiers Lt. Hadar Goldin and Sgt. Oron Shaul, who were killed in Gaza during Operation Protective Edge in 2014, as well as three other Israeli citizens – Avera Mengistu, Hisham al-Sayed and Juma Abu Anima – who voluntarily crossed into the Strip. Mengistu and Sayed are both said to suffer from mental illness.The Goldin and Shaul families had urged the Israeli government to reject the request to search for the missing terrorists, saying that acquiescing to Hamas’s demand would be “inconceivable” until the terrorist group returns the bodies of their sons.“Any Israeli humanitarian gesture toward Hamas must be conditioned on bringing the boys home,” the Goldin family said in its statement. “For the Israeli government to accede to Hamas would constitute moral injustice and political weakness. It’s inconceivable that the government should continue acceding to Hamas’s humanitarian whims at a time when it is holding Israel Defense Forces soldiers.”The Shaul family in a similar statement said: “Oron was kidnapped into a tunnel Hamas members dug and has been held by them for more than three years, during which they have not allowed Red Cross personnel to determine what his condition is.”During the 2014 war, several soldiers were killed by Hamas terrorists who emerged from numerous tunnels dug into Israel by the jihadist group, surprising the IDF and leaving residents of border communities concerned about the possibility of additional tunnels beneath their homes. By the time of the last cease-fire, the IDF said it had destroyed 32 tunnels that crossed under the border.Israel has begun building a state-of-the-art underground barrier that has a system of advanced sensor and monitoring detection devices combined with a six-meter above-ground fence, similar to the one that runs along the Israeli-Egyptian border.The barrier is expected to cost more than NIS 3 billion and be completed within two years. Construction, which began near the southern city of Sderot last year, is being led by Brig.-Gen. Eran Ophir, head of the army’s fence-building administration.The destroyed tunnel extended from Khan Yunis in the Gaza Strip to within 2 km. of Kissufim in the northwestern Negev, where construction on the underground barrier has not yet begun.The IDF is confident that no tunnel will be able to be built across the underground barrier, which it says will change the reality on the ground for both Israel and Hamas. “The Zionist occupation taking captive the martyrs’ bodies is a desperate attempt to impose a new equation on the resistance,” Hamas spokesman Fawzi Barhoum said.  “This will only increase our insistence on holding onto the option of resistance, continuing to acquire all of its tools and developing it to defend our people.” “The resistance that knew how to bring home its heroes from the enemy’s prisons in the Wafa al-Ahrar deal will be able to bring back the martyr heroes’ bodies,” the Wafa al-Ahrar said in reference to the Schalit deal.“The Zionist enemy’s announcement about taking captive the tunnel martyrs’ bodies was not surprising,” Islamic Jihad spokesman Daoud Shehab said. “Perhaps the martyrs were initially wounded, but the Zionist army prevented the Palestinian teams from searching [for them]. At the same time, they [Israel] also did nothing to search for the missing and waited until Islamic Jihad officially announced they died to complete their crime in taking the bodies captive.” “The movement is committed to working to bring back the pure bodies in the way that the enemy forces it,” Shehab added.Adam Rasgon contributed to this report.