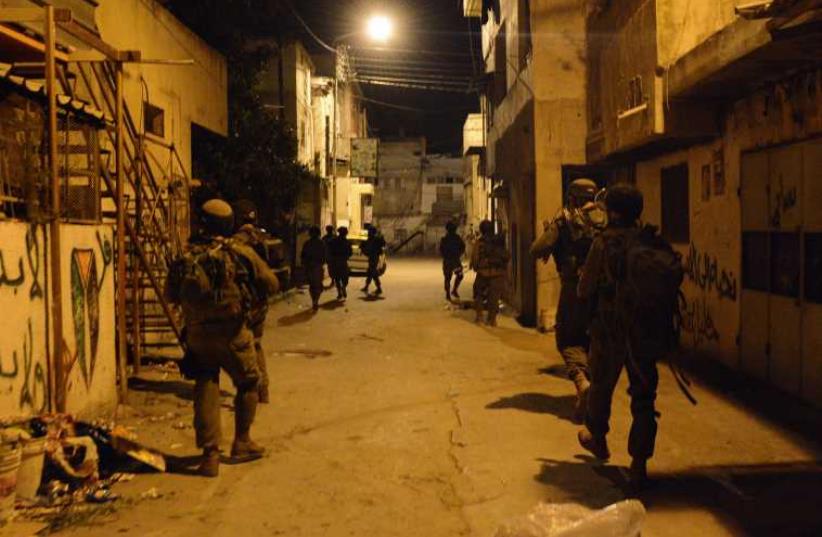 IDF troops operating in the West Bank
(photo credit: IDF SPOKESMAN’S UNIT)
Advertisement
Security personnel on Thursday prepared the homes of four West Bank terrorists for demolition.IDF soldiers, backed by border police and personnel from the Civil Administration for Judea and Samaria, mapped out the home of Abd Hamadan Ata in a-Zawiya, southeast of Kalkilya, two days after stabbed and wounded a civilian in a Petah Tikva grocery store, before being killed by the civilian and the storekeeper.In Haja, northeast of Kalkilya, security personnel examined the home of Basher Abd al-Khader, who went on a stabbing spree stretching from Jaffa to Tel Aviv on Tuesday, murdering American tourist Taylor Force, and wounding 11 others.Additionally, security personnel mapped out the homes of two terrorists in Akv village, in the Binyamin region northwest of Jerusalem, after they carried out a shooting attack in Jerusalem on Wednesday, before being shot dead by police.Separately, during weapons searches in Bir Naballah, Binyamin Brigade fighters together with Judea and Samaria District police seized an Uzi submachine gun, two bullet clips, and 9 mm. ammunition.Soldiers from the Menashe Brigade together with agents from the Shin Bet (Israel Security Agency) carried out an arms raid in Ya’abad as well, seizing two bullet clips and ammunition.Meanwhile, security personnel arrested a Palestinian suspects in overnight raids between Wednesday and Thursday across Judea and Samaria.Five of them allegedly took part in unorganized violent incidents. The suspects include seven Hamas members, one of whom was arrested in Makan Shabaiyah, northeast of Nablus, and six of whom were arrested in Hebron.