Paramedics and emergency services treated the victim, 48, who was found unconscious, before rushing him to a hospital in Jerusalem. 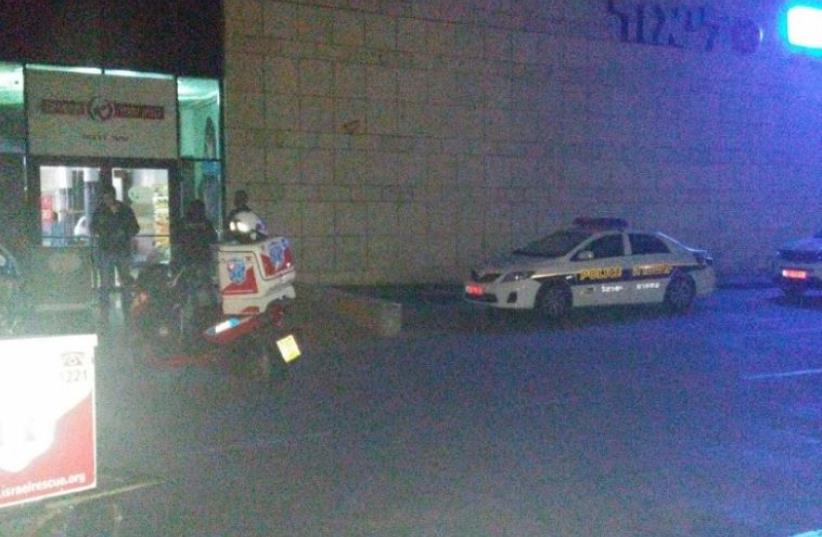 Site of attack in Ma'aleh Adumim
(photo credit: MEDABRIM TIKSHORET)
Advertisement
A security guard in Ma’aleh Adumim’s only mall was seriously wounded over the weekend in what police believe was a terrorist attack in the West Bank settlement located just outside Jerusalem.Ma’aleh Adumim Mayor Benny Kashriel said the incident marked the first time a terrorist attack had occurred within the city of 37,400 people.Judea and Samaria police have banned Palestinian workers from entering the city until Thursday, but they will be allowed to go to work in the adjacent Mishor Adumim Industrial Park.Police were alerted to the attack at 1:15 a.m. on Friday and arrived at the mall to find a man, age 48, lying on the floor with multiple stab wounds. The assailant had fled.The victim, Tzvika Cohen, was placed on a respirator and rushed to Hadassah-University Medical Center in Ein Kerem, where he underwent surgery for a head wound.Cohen, the father of four, was listed in serious condition in the hospital’s intensive care unit.The Israel Police, Border Police and Shin Bet (Israel Security Agency) launched a manhunt for the terrorist.Kashriel called on the government to take harsher measures against Palestinian terrorists, including freezing taxes transferred to the Palestinian Authority.“For each attack, a new settlement neighborhood should be built in Judea and Samaria,” he said.On Friday morning, crowds at the Ma’aleh Adumim mall were thinner than the usual pre-Shabbat onslaught, according to regular shoppers, but it was far from a ghost town.“Thank God, we haven’t seen any drop in business,” said Mira, the manager at the Neeman bakery branch, as she doled out burekas and ice coffee to waiting customers.At the Co-op Shop supermarket, a young cashier named Sarit described the victim as “a lovely person, always ready with a big smile and ‘hello.’” “I’m in shock. I was afraid to come to work today. But what are you going to do?” she said, as customers traded gossip about the attack and reports of the perpetrator that had been posted on numerous WhatsApp accounts since early morning.Most shoppers seemed less concerned with the attack than they were with beating the Shabbat clock. But there was a noticeably more somber mood throughout the mall, as if people wanted to do what they had to do and then quickly get home.In an incident at the Beit Hamishpat checkpoint outside Ramallah, near the Beit El settlement, soldiers shot and killed a Palestinian attacker who attempted to stab them on Friday afternoon.“A Palestinian assailant armed with a knife attempted to stab soldiers stationed at a security crossing near Ramallah.The force thwarted the attack, firing at the assailant, resulting in his death,” a military statement said.A Palestinian official and family members identified the would-be stabber as Mahmoud Shaalan, 17, a Ramallah resident who also held US citizenship.On Saturday, in the Eshkol region along the border with the Gaza Strip, three unarmed civilians attempted to cross into Israel. The IDF captured them and took them in for interrogation.