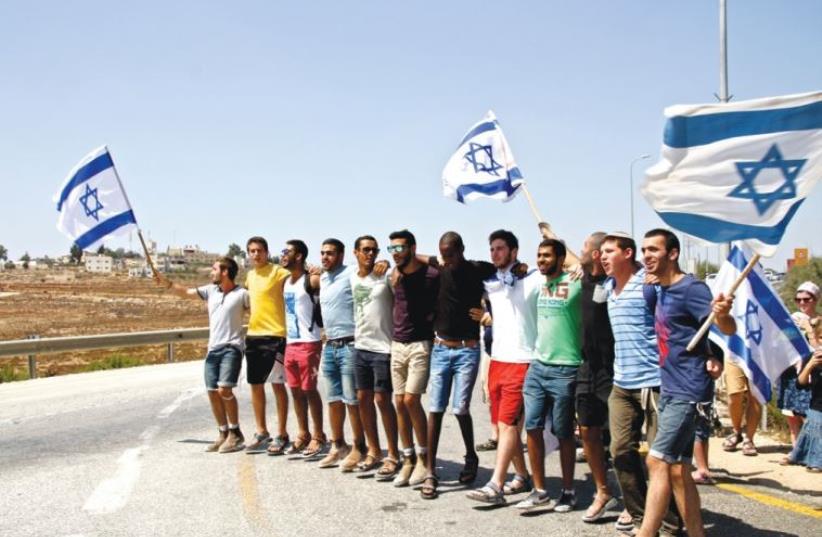 Right-wing Israeli demonstrators (bottom) express support for the IDF outside Halamish
(photo credit: TOVAH LAZAROFF)
Advertisement
“One, two, three, four, occupation no more,” chanted protesters as they waved Palestinian flags and stood face to face with IDF soldiers on the edge of West Bank village of Nabi Saleh on Friday morning.Down the hill, within view of the Palestinians, a small group of settlers and other right-wing activists waved Israeli flags and danced at the entrance to the Halamish settlement.“The Israeli people lives!,” they sang as they jumped up and down, sometimes in a circle and at other moments in a human chain that stretched across the road and at times threatened to disrupt traffic on Route 465, which runs between Halamish and Nabi Saleh. The dueling rallies were separated by only a brown rocky hillside. Up the hill, the Palestinians of Nabi Saleh held their weekly protest march against Israel’s presence in the West Bank, as they have done since 2009.  Last week, the march made headlines after a video from the event went viral. It showed women and children attacking an Israeli soldier as he attempted to arrest a 12-year old Palestinian boy with a broken arm on suspicion of throwing rocks.This Friday, settlers held their own rally organized by neighboring Beit Aryeh Council head Avi Naim to show support for the soldiers and their efforts to protect Israelis in Judea and Samaria.“We’re here to say to our soldiers we support them and we love them. And to show the other side that we are here and we are not going anywhere.”Halamish resident Rifki Fuchs Sabo, who is originally from Montreal, said she had come to the rally instead of cooking for the Sabbath because she, too, wanted to support the IDF.“Last week a group of Arab women and children physically assaulted an Israeli soldier. All he was doing was trying to arrest a rock-throwing child. Honestly, the soldiers are here to protect. Most definitely if a soldier is being threatened in any way, especially physically, then I think he has the right to be able to defend himself along with the rest of this country,” Sabo said.She stood under a temporary awning that had been set up over a plastic table with drinks and cake for the protesters and soldiers.Marchers left from there and headed down the road. MK Oren Hazan (Likud) also came out to shake hands with the soldiers stationed just below the settlement.In Nabi Saleh, protesters marched down the small paved road that leads out of their village until soldiers blocked their path by forming a line across the road.Marchers ignored stun grenades thrown in their direction.Videos shot from the scene and posted on YouTube showed how they stood next to the soldiers and chanted, “Five, six, seven, eight, Israel is a fascist state” and “Free Palestine.”One Arab woman with a scarf over her hair held up a Palestinian flag in one hand and made a peace sign with the other.A soldier pulled the flag away from her, but shortly after she was able to retrieve it to the applause of the protesters.Several scuffles broke out between soldiers and protesters, as the troops pushed them back. One man who wore a Palestinian flag over his shoulders was thrown to the ground by soldiers.Off to the side of the road, young Palestinian men, many of whom were masked, used sling shots to hurl stones at the soldiers positioned on the hillside, who responded with tear gas.One soldier and one border policemen were lightly injured, according to the IDF. Four Palestinians were detained during the protest but were released when the protest was over, it added.A few Palestinian teens threw rocks at the last of the army jeeps as they drove out of the village.