Mashaal: Israel-Hamas truce talks have been positive, but still no deal

Hamas politburo chief told London-based newspaper that one of the mediators in the talks is former British premier Tony Blair. 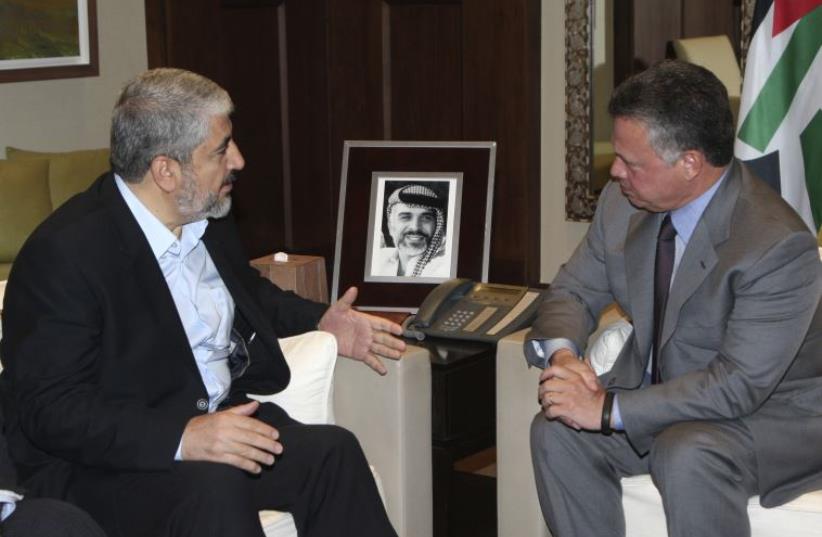 Hamas political bureau chief Khaled Mashaal (L) meets with Jordan's King Abdullah in Amman
(photo credit: REUTERS)
Advertisement
Is a long-term truce between Israel and Hamas in the offing? Khaled Mashaal, the head of the Palestinian Islamist movement’s political bureau, confirmed on Friday that the two sides are engaged in indirect discussions on a possible cease-fire in the south.“There is talk between the two sides,” Mashaal told the London-based Arab-language daily newspaper Al-Araby al-Jadid. “As of this moment, the talks are moving in a positive direction, but they have yet to mature into an agreement.”Mashaal confirmed earlier reports that one of the intermediaries in the negotiations between the two sworn enemies is former British prime minister Tony Blair. The proposals raised during the discussions included variations of cease-fires and truces that would theoretically span years.“We told [the intermediaries] that we don’t need new concepts and we don’t need wars,” Mashaal said. “But there is legitimate resistance against the occupation. As long as there is occupation and there are settlements, we are not looking for war.”The Hamas official noted that “the organization is open to all efforts [to bring about a cease-fire], but this won’t be done on account of the Palestinian national interest.”Earlier this week, a flurry of reports that Israel and Hamas were on the verge of signing a long-term deal led to official denials from Jerusalem and to deep concern among Fatah officials in the West Bank.PA officials warned that any such agreement would pave the way for the establishment of a separate Palestinian state in the Gaza Strip.The warning came amid reports that Mashaal and Blair have reached understandings regarding a proposed truce.Unconfirmed reports claimed that Hamas was ready to strike a deal with Israel in return for the creation of a sea passage between Cyprus and the Gaza Strip.Yasin Aktay, an adviser to Turkish Prime Minister Ahmet Davutoglu, was quoted in a Gaza-based newspaper as saying that a long-term Hamas-Israel deal was in the offing, as was reconciliation between Israel and Turkey over the MV Mavi Marmara incident.Mashaal held talks in Turkey last week.The Prime Minister’s Office reversed a previous policy of not responding to the stories, instead issuing a denial of the reports.“Israel formally clarifies that there are no meetings with Hamas,” the Prime Minister’s Office said. “Neither directly, through third countries, nor through mediators.”Herb Keinon and Khaled Abu Toameh contributed to this report.