The plan would be easier to accept if Jewish building was included. 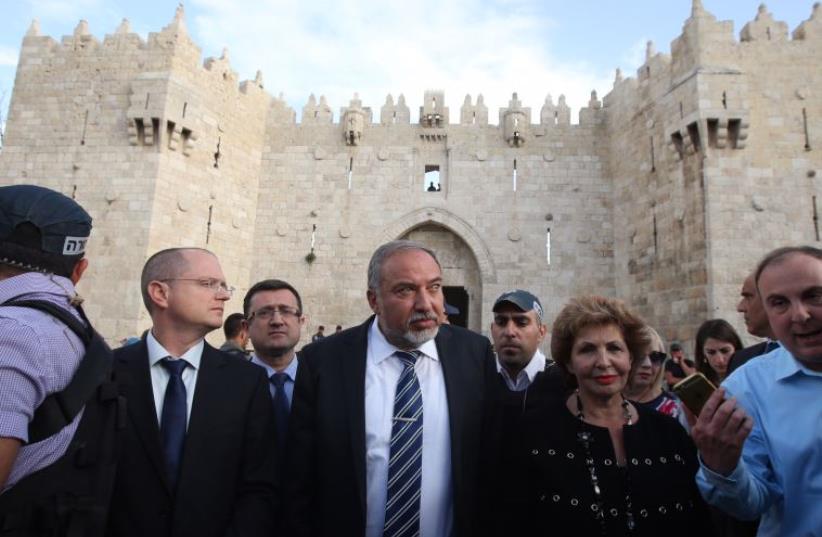 Liberman at Damascus gate‏
(photo credit: MARC ISRAEL SELLEM)
Advertisement
Right-wing cabinet ministers plan to block Defense Minister Avigdor Liberman from authorizing new Palestinian construction in the West Bank unless he simultaneously hands out permits for settler construction.“A nationalist government cannot freeze new construction in the capital Jerusalem, Judea and Samaria with one hand and authorize extensive construction in the Palestinian Authority [with the other],” four ministers said Sunday in a letter to Liberman.Bayit Yehudi ministers Uri Ariel and Ayelet Shaked, and Likud ministers Yariv Levin and Ze’ev Elkin also complained about the matter to Prime Minister Benjamin Netanyahu, warning that when it came to authorizing Palestinian construction, Liberman’s plan violated coalition guidelines.The four ministers demanded a debate in the cabinet before such steps would be authorized, saying that, without such a debate, they will feel obligated to do everything possible to prevent implementation of Liberman’s plan.At a briefing with military reporters last week, the defense minister unveiled a new “carrot and stick” program to halt Palestinian terrorism.He promised harsher punishment for families and villages from which terrorists originate, and economic benefits for those areas that have not produced terrorists.Liberman’s plan in Area C of the West Bank, which is under Israeli military control, calls for the construction of two Palestinian soccer fields, an industrial park outside of Nablus and a hospital in Beit Sahur.Three master plans would be expanded and another one would be advanced, Liberman said, but he did not quantify what that would mean in terms of the number of new Palestinian homes that would be permitted.In addition, an economic corridor would be opened from Jericho to the Jordan River in accordance with a plan being promoted and paid for by the Japanese government.Liberman clarified, however, that he does not intend to allow the Palestinians to build another city in the West Bank.When it comes to cracking down on terrorist activity, Liberman said he intends to increase IDF activity in Palestinian cities. There would be an increase in arrests of terrorism suspects; confiscation of funds designated for terrorist activity; and a clamp down on media outlets that promote incitement against Israelis and Jews.Right-wing politicians and settlers are concerned that Liberman will allow Palestinian development in Area C and, thereby, help expand the Palestinian holding of that territory.“We saw in the press that you intend to permit mass land development for Arabs in Area C,” the ministers said. “This would blatantly violate the coalition guidelines.”They further stated that “this would be a prize for Abu Mazen [PA Chairman Mahmoud Abbas], who encourages incitement and terror against the State of Israel.”The ministers indicated that they would have an easier time accepting gestures to the Palestinians if construction was authorized simultaneously for Jews. They said it did not make sense that Liberman was being tougher on Jewish residents of Judea and Samaria than his predecessor, Moshe Ya’alon.As of Sunday evening, the ministers had not heard back from Netanyahu or Liberman on the matter.Settler leaders have been in conversations with government ministers, the Defense Ministry and the Prime Minister’s Office in hopes of thwarting the plan.As with the right-wing ministers, they have long complained that only a small number of building plans have been advanced over the Green Line in both Jerusalem and in Judea and Samaria.So it was particularly upsetting for them to hear about Liberman’s plans to advance building for Palestinians, given that they feel as if they are in a de facto freeze.The pro-settlement NGO Matot Arim has launched a letter-writing campaign in which they urged Israelis who oppose Liberman’s plan to write letters to cabinet ministers and Knesset parliamentarians. They warned that Liberman was poised to “retroactively authorize tens of thousands of Arab structures built illegally in Area C” while continuing to uphold the freeze on Jewish homes.They urged opponents of the plan to use this text: “Unfreeze building by Jewish victims – instead of koshering illegal dangerous extensive Palestinian building. VOTE AGAINST Liberman ‘carrot’ plan.”