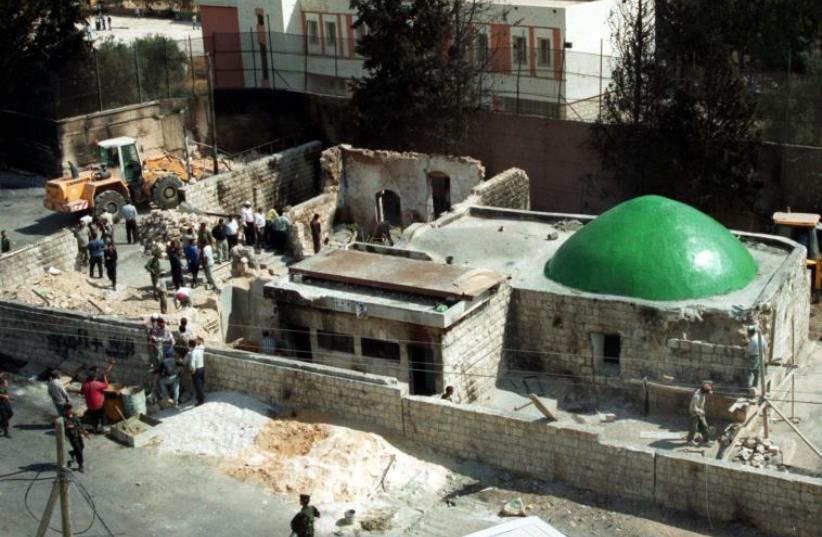 Tomb of Josef, Nablus
(photo credit: REUTERS)
Advertisement
During a raid on Nablus’s old city early Friday morning, the Palestinian Authority Security Forces (PASF) shot and killed two gunmen, suspected of killing two PASF officers Wednesday evening,  according to PASF spokesman Adnan al-Damiri. “In an operation to arrest the criminals, who killed two members of the security services, a team of security forces came under fire and then returned fire, leading to the death of two of the criminals,” Damiri told Wafa, the official Palestinian Authority news site. PASF also confiscated weapons and other illegal paraphernalia that had been in the possession of the deceased gunmen. Friday's incident came the day after gunmen and PASF clashed in Nablus's old city, resulting in the death of two officers, Shibli Bani Shamsa and Mahmoud Taraira.Damiri added that PASF will act swiftly in arresting any law violator: “We reassure our people that the assassination of [the two PASF officers] Mahmoud Taraira and Shibli Bani Shamsa [on Wednesday] will not pass in vain and we are committed to arresting all law violators and confiscating illegal weapons.”Just over a month ago, another clash between the PASF and gunmen in Nablus resulted in the death of two PASF officers.