The Civil Administration issued a demolition order against it already in 2009. 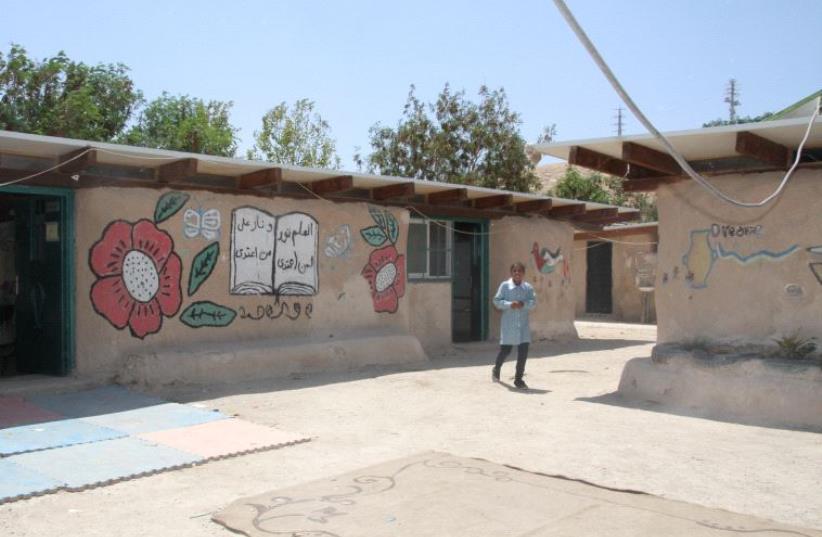 The al-Khan al-Ahmar School
(photo credit: TOVAH LAZAROFF)
Advertisement
The Palestinian Authority has called on the international community to pressure the government not to destroy a small adobe Palestinian Beduin school, located in Area C of the West Bank, just outside of Jerusalem.“The PA Education Ministry completely rejects any decision to close the al-Khan al-Ahmar school and calls on all international organizations and consulates and embassies to intervene immediately to prevent the closure of the school,” PA Education Ministry Spokesman Abd al-Hakim Abu Jamoos told The Jerusalem Post Tuesday. The ministry is organizing a solidarity protest for Wednesday outside the al-Khan al-Ahmar School, which is located on a small ridge overlooking Route 1.“International organizations, consulates, embassies and friends will participate,” Abu Jamoos said. To attract local and international attention to its situation, the small brown school that was built with international funds, started the fall semester on Tuesday, a week earlier than other Palestinian schools.The Civil Administration issued a demolition order against the school, a cluster of a half-dozen one-room buildings that can only be reached by a dirt road, in 2009.Since then, the NGO Regavim, as well the nearby settlement of Kfar Adumim, have filed a number of petitions to the High Court of Justice, asking the court to force the Civil Administration to demolish the school and the Palestinian Beduin encampments around it that are home to some 100 families.Attorney Shlomo Lecker, who represents the Beduin community, said the case was closed after the state said it would remove the school and community, once it found an alternative location.But, in 2016, Kfar Adumim petitioned the High Court again, noting that no action had been taken.Defense Minister Avigdor Liberman is set to issue an opinion on the matter next week, and the PA and community members fear he will tell the court that the Civil Administration now plans to destroy the school.The PA Education Ministry established the al-Khan al-Ahmar School in 2009 with the support of a number of international parties including the Italian government; the UN Office for the Coordination of Humanitarian Affairs; the UN Development Program; and the Norwegian Refugee Council.The campaign to save the school adds to international pressure against Israel to halt such demolitions.Settlers who live in the area between Jerusalem and the Dead Sea, however, have persistently warned the government that the number of illegal Palestinian and Beduin herding encampments has grown, particularly around Route 1, a main artery into Jerusalem.They say the encampments have been strategically placed by the Palestinian Authority to secure its hold on an area it believes is vital to a future state.Leker said that the Beduins, living near the school, did not have the option of legalized structures because of the lack of building permits.The school has grown steadily over the years and now employs 16 teachers and serves approximately 179 students from grades one through nine who live in five different local Beduin encampments.“Our students previously had to travel long distances to Jericho or Azariya, which required many of them to wake up at 5 a.m. and return home at 4 p.m.,” headmaster Halima Zahaika told the Post.“Al-Khan Al-Ahmar changed that and has allowed them to receive an excellent education near their homes.”Even if Israel closes the school, Zahaika and her staff plan to continue educating their students.“If Israel closes the school, we will teach classes in tents. We cannot allow our students to be deprived of their most basic right to an education,” she said.